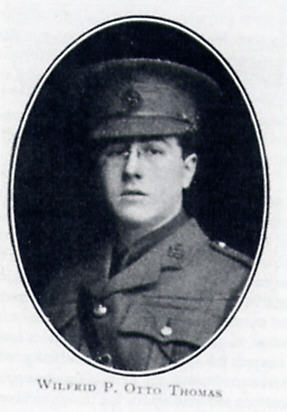 In 2012, Sian van der Welle submitted a query about Wilfred Thomas, an Old Georgian who was killed during WW1 and lived in Longcroft Avenue in 1911 when he was a pupil at the school. Records show he had lived at The Chilterns in Longcroft. Sian had lived in Longcroft for 12 years and has a small picture of Wilfred at his front door, though she could not recognise the house and doesn’t know which one might be Chilterns. In fact by the time Wilfred joined up the family had moved to The Longmynd, Douglas Road and later to Byeways on Ayres End Lane.

According to Paddy Storrie’s book “Here I am; Send me” about the 18 Old Georgians who died in the Great War, Wilfred is the only one to be commemorated on the Harpenden War Memorial on Church Green. 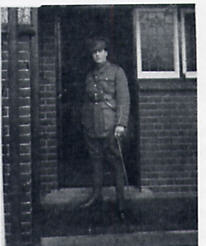 Wilfred was born in 1896. His father was the successful manager of a magazine publisher in London, and moved his family to Harpenden in 1909, when he became a Governor of St George’s School. Wilfred and his younger siblings were enrolled at the school and Wilfred apparently cut a ‘dashing and distinctive figure’ in the school magazine The Georgian, being awarded the prize for ‘Neatness’ in 1912, and being a good shot on the 25m school rifle range. However, he failed his university entrance exam in the summer of 1914, and this may have led to decision to enlist on 18 September 1914.

He found his fellow Royal Fusiliers “a rather tough lot” when he arrived at their barracks in Hounslow. But, as young public school gentleman, he was keen to earn his stripes as quickly as possible and by October was recommended for Sergeant – something which normally took 8 years in peacetime. And while the ranks were still in civvies, he described himself as “the best equipped man in the company”, with all the trappings of his social rank, and he sent home for a swagger stick.

With the help of family networks and connections – his father approached Lords Reading and Northcliffe to lobby on Wilfred’s behalf – Wilfred was a commissioned officer by Christmas. He was attached to the 9th Battalion, the Yorks and Lancaster Regiment – largely made up of South Yorkshire miners, who proved to be very unfit. However, though at 18 he was very inexperienced, and his commanding officer was only 22, they did work hard through training during the early months of 1915. By this stage Wilfred was keen to get to the front, despite the news of the disasters of Gallipoli, Verdun and Ypres.

At last – deployment to France

In December 1915 Wilfred joined his unit – 8 platoon of B company on the front line – experiencing shell-fire and preparing for the summer offensive with acute awareness of danger. Writing on 21 June 1916 to those who were due to attend a school reunion 1 July he seemed to be foreseeing his death: “Maybe by the time the actual day arrives you will realise why I had to be so early with my good wishes to ensure them reaching you”.

On 1 July 1916 four battalions of 70th brigade gathered in the assembly trenches in Authuille Wood, preparing an attack on the German ‘Leipzig Salient’. Wilfred’s 9th Yorks and Lancs, along with the 11th Sherwood Foresters, were to be the second wave. Already in the assembly trenches they came under unexpectedly heavy German bombardment. But despite the first wave taking very heavy casualties, the attack continued and Wilfred’s unit faced withering machine gun fire as soon as they left their forward trenches. From Paddy Storrie’s account it appears that Wilfred “at the last moment volunteered to take over a first lot of men, whose officers had been killed in the trench. As none of the enemies guns had been silenced, casualties were very great and he was wounded in the leg; but after bandaging himself in a shell-hole he took over his own men when they came up.” At this point he was struck full in the face by a shell fragment and killed instantly.

The attack ground the halt, with the loss of half of those who had taken part that day – the 70th Brigade lost 2307 men – 581 of them in the 9th Yorks and Lancs.

Wilfred’s body was not recovered and buried until 11 weeks later – to the distress of his family. His father had mooted visiting the site – an indication of how little those in Harpenden knew of conditions on the front.

Wilfred’s family commissioned a stained glass window in the North wall of the school chapel in his memory, and endowed the Wilfred Thomas Prize for Endurance, which is awarded each year. 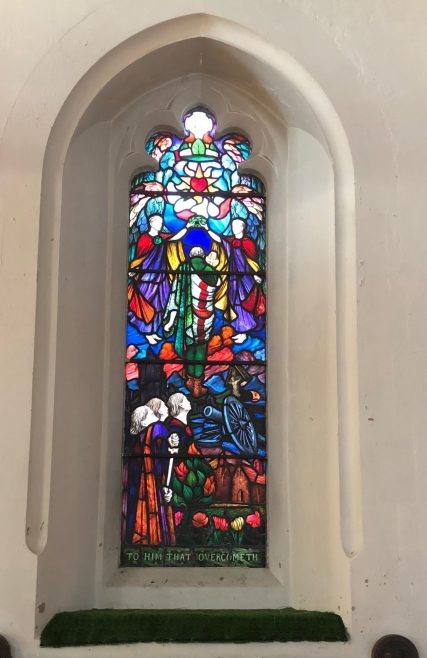