Harpenden in the Great War 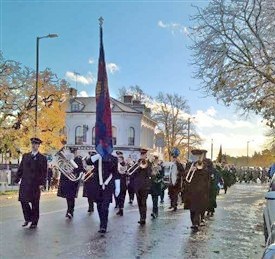 The Society’s exhibition on 1 December 2018 was timed to follow the various civic celebrations on the centenary of the 1918 Armistice in Harpenden.

The exhibition opened with pre-war Harpenden at peace – when sheep grazed on the common, and the hounds of the Hertfordshire hunt were driven down the High Street to the Meet on Harpenden Common – and with a comment from Ursula Bloom, pianist at the White Palace cinema: “We were the sons and daughters of an empire which we believed to be impregnable.” As Ursula played for the film on the evening of 4 August 1918, “the Pathe Gazette flickered across the screen with pictures of the Reserves being called up”, and later she had a long wait on Harpenden station to return to her home in St Albans while train after train passed through the station with the blinds down, carrying troops to the front.

Recruitment started immediately, and by January 1915 some 200 men were recorded on a Roll of Honour, by which time a number had already been wounded or killed. 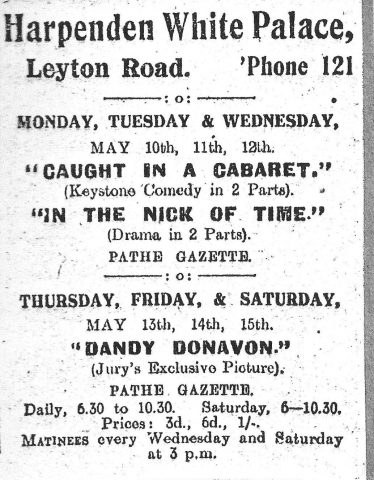 Meanwhile the Notts & Derbys Territorials (the Sherwood Foresters) were immediately mobilised and by 21 August 1914 were arriving in Harpenden. Some 4500-5000 men were billeted with local families – up to four in a room in houses in Cravells Road, for example. The troops trained on the Common and surrounding areas, while reading rooms, entertainments and support were provided in every available church hall and meeting room – and the cinema was well attended. Friendships formed and in 1920, Capt. W C C Weetman recorded in his history “The Sherwood Foresters in the Great War – 1/8th Battalion” : “We were destined to stay for three months, where we received on all sides the greatest possible hospitality. We are sure that all who were billeted at Harpenden will look back with the greatest pleasure at the time spent in that delightful district. The men for the most part were billeted in small houses, three or four together, and with the more than ample rations and billeting allowances then in force, both men and billet owners were exceedingly well off.” Deaths or injuries of Sherwood Foresters were mentioned in the Parish Magazine, to be shared with their hosts.

As well as providing for the billeted soldiers the people of Harpenden were busy making and sending ‘comforts’ for the troops serving in the trenches and for those lying injured in the military hospitals in Harpenden. In her journal for September 1915, Theodora Wilson noted “All through the winter we were asked to knit socks and mufflers for our men at the front, and there were constant demands for help in all sorts of new ways.”  The Girls Department of the Victoria Road school worked tirelessly, contributing, among other projects, to the National Egg Collection – see the school log book entries in the Document attached below. Funds to support field kitchens for Belgian soldiers were also organised, and Mrs Tweedie, with her hardworking household staff, cared for 15 convalescent wounded Belgian soldiers at Bennetts in Leyton Road, supported by donations raised by Captain Arthur Lydekker.

Meanwhile the pressures on local young men who had not yet signed up were considerable. The Rector, Rev Kean M Pitt, wrote in the Parish Magazine of April 1915: “I am tired of appealing to men who are fit, strong, and perfectly able to offer their services for their country and will not.” And two months later he complained: “There are still left amongst us many who seem deaf to all that manhood would consider imperative. …… If only we could put the hearts of many of our girls and women into their bodies, how quickly we should fill up the village list of its brave men.”  The Herts Advertiser of 15 April 1915 reported that “Sgt Garment, Privates T Butcher, WW Hawes and C Oakman of the 1st Herts Regiment, who were invalided home wounded from the front, are still at Harpenden, persevering with their recruiting efforts on behalf of the Reserve Battalion, and are now engaged on a house-to-house visitation. They have enlisted several young men, but consider – and the public generally will agree – that there are many others at Harpenden who ought to respond.”

Yet the Parish Magazine also carried news of deaths and injuries. and Theodora Wilson reflected the compassion with bereaved families in October 1916: “The war goes on and hearts are breaking and limbs are maimed and overstrained in ceaseless toil and yet our courage bears up and we hope on for a victory that will end this awful tragedy and make it possible to say Never again such a war.” 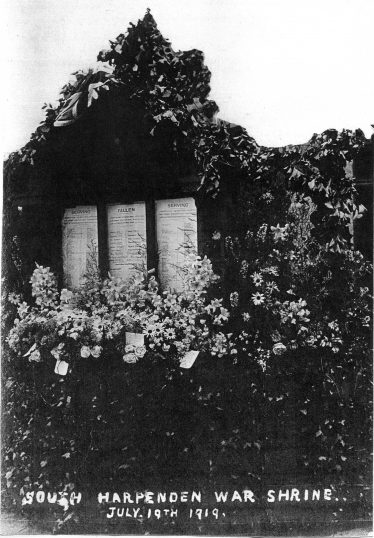 Already in 1916 there were shrines and memorials. Now lost, there was a shrine in Heath Road as mentioned in the Parish Magazine in May 1916 – “We hope in the near future to erect another War Shrine and Roll of Honour for the district beyond the Skew Bridge. Then the names of all men not on the Heath Road Shrine will be recorded on the new one.” The South Harpenden shrine was dedicated in October 1916 with a service in St John’s church. The shrine “situated at the bottom corner of Lower Cravells Road in Mr Timson’s front garden, by consent of the landlord, Mr Ward, is a very beautiful one. It was designed by Mr Stanley Salisbury and the work was executed by Mr. Freeman, organist of St. John’s Church. The names on the shrine, which number over 200, were collected by Mr. S Myers of Coleswood Road.” This is the shrine recorded in a postcard at the time of the Civic Service on Harpenden Common on 19 July 1919 – the names now being recorded on the St John’s Church memorial and the Roll of Honour for the parish, included in the lists of all known names of those who served and died.

The war on the home front 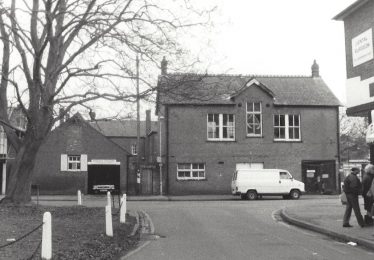 One of the munitions workshops was in a ‘building behind The George’. Credit: Scan of photo 4 High Street, seen from Amenbury Lane

The war years had an impact on the life of the village. There was food rationing, black-out and air-raids. The Zeppelin which was shot down near Cuffley in September in September 1916 had dropped bombs on Broadbalk field on the Rothamsted Farm – which was affected in other ways too. As elsewhere, women were drawn into new forms of work, in Harpenden’s two munitions workshops and as Land Girls on the farms. Many were unable to continue home-working for the hat industry as their time and space was given up to caring for billeted soldiers. The Post Office employed women in delivery work, and also had two girl messengers by 1915.

There are disturbing accounts of the hidden suffering of the wounded. In her account of her childhood in Kinsbourne Green, Connie Howard records the terrible injuries suffered by her brother Arthur: “As he was the very first soldier to return home from the front in 1915 the people of Harpenden wanted to give him a great welcome. All the dignitaries were on the Harpenden Midland Station and the band was there too, but Arthur was so shattered by his terrific wounds that he knew nothing of what was happening. People on the station were shocked at his appearance.” He was nursed back to health by his mother, who “coped with his terrific moods of depression and violent headaches. His balance was affected and he was unable to walk straight, but rolled from side to side ….. Once he heard a woman remark ‘There goes that man again – he’s drunk again and it’s only ten o’clock in the morning’. He never answered but was hurt and distressed.”

Armistice was anticipated in the days leading up to 11 November. On that day Theodora Wilson recalled that “by 11 o’clock the order went round “Cease Fire” on all fronts – and the flags were run up and the bells rang out everywhere and even the German prisoners working close by here on the Rothamsted mangold field threw up their caps and sang God save the King with our workmen. Poor fellows, I expect they were as glad as we are that the war is over. I ran up to shake hands with them and speak a few halting words in their own tongue.” The German PoWs were escorted each day by train from Hatfield where several hundred were lodged.

When the war had ended there was discussion of suitable forms of memorial, resulting in the erection and dedication of the War Memorial on Church Green, and the adaptation of 40 Luton Road in the Memorial Nursing Centre. There were memorials to individuals and parishioners in the churches, and a National Roll of Honour was compiled to record not only the dead but those who served. However it is clear that this is very far from complete.

As the men returned from the front, local families faced an acute housing shortage. Nationally this was addressed by a promises of ‘Homes for Heroes’, and eight houses at Kinsbourne Crescent, Luton Road, were built under this government-sponsored scheme – the start of the provision of council housing.

There is more information to be mined from the newscuttings in our archives and in the Parish magazines. 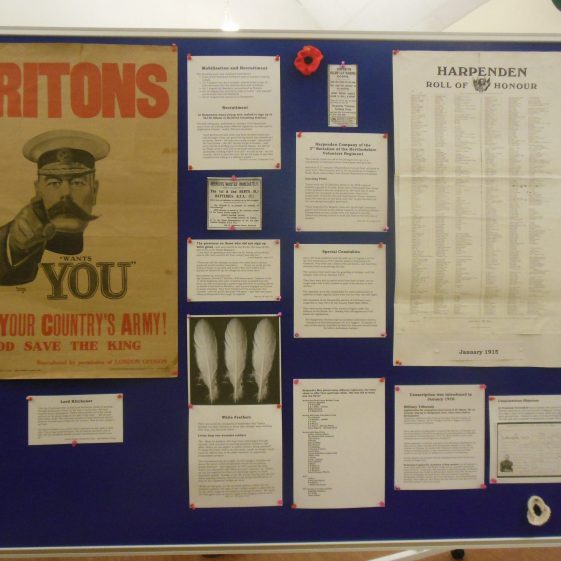 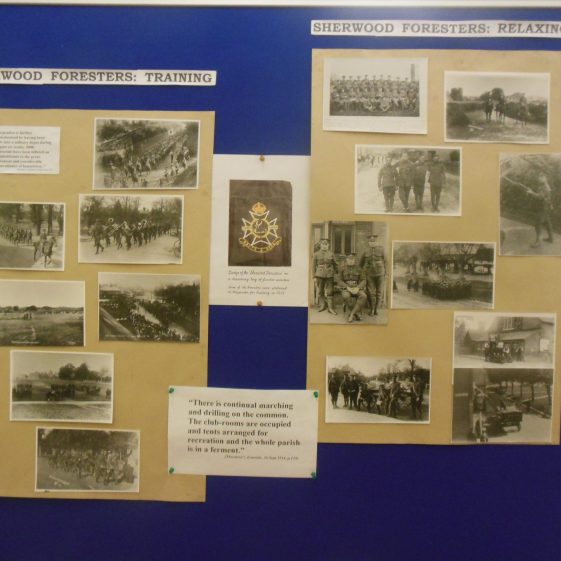 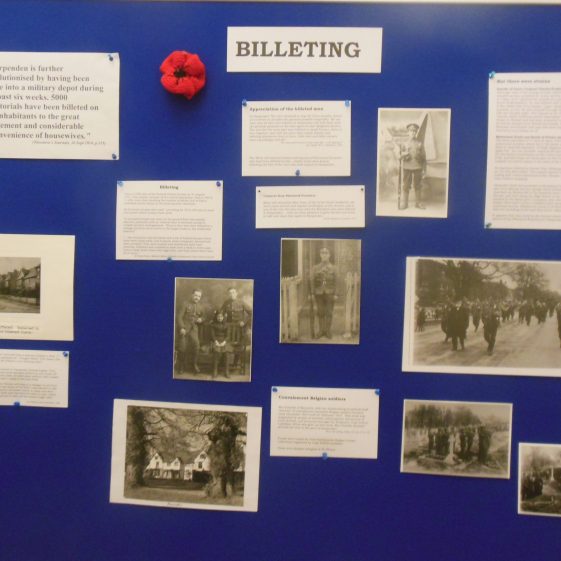 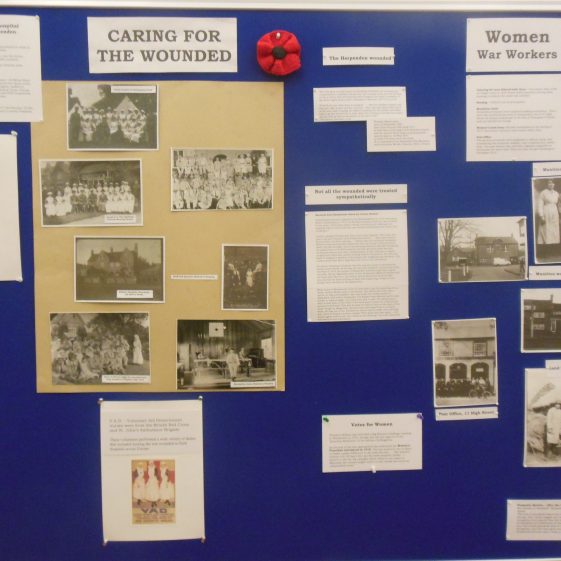 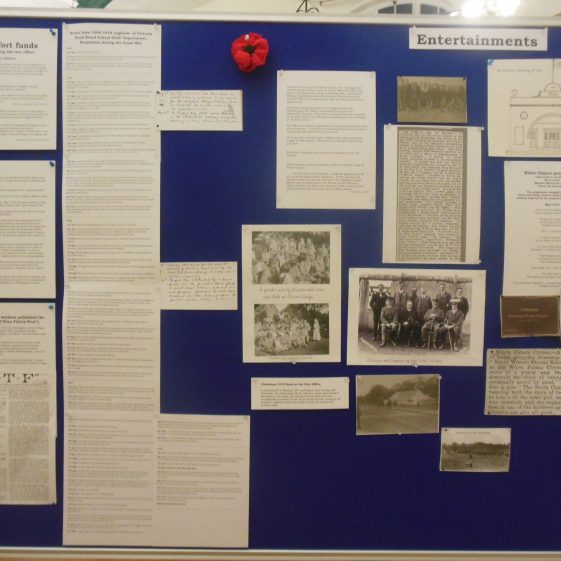 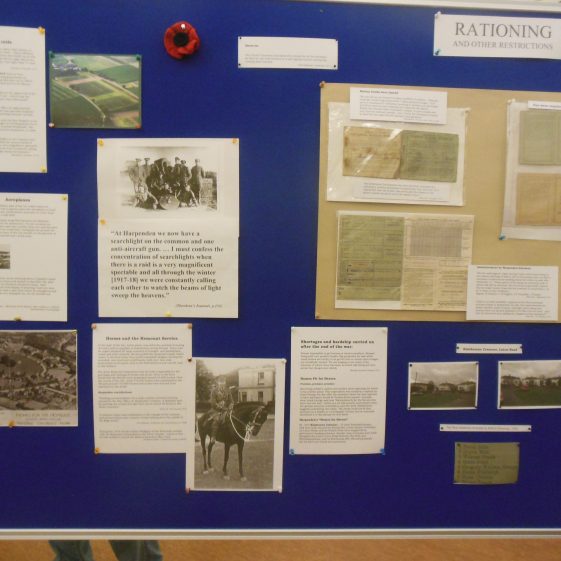 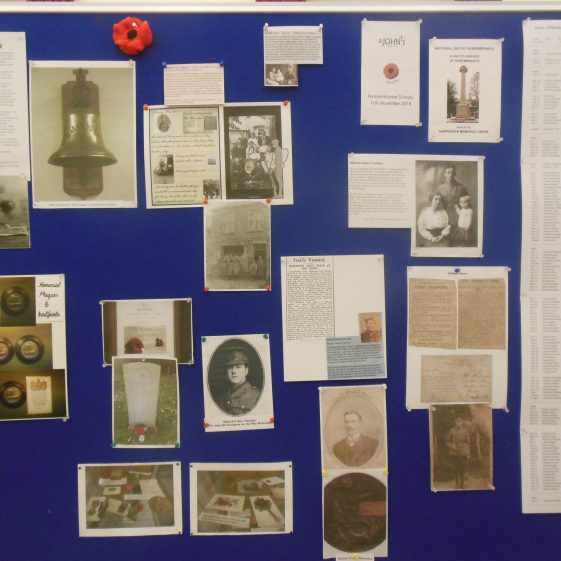 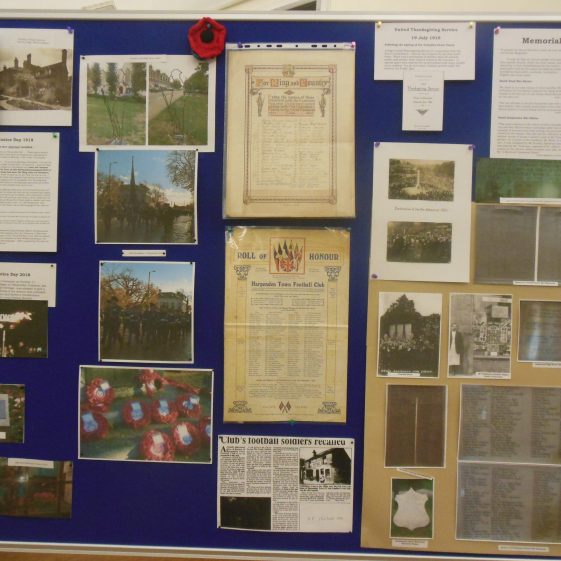 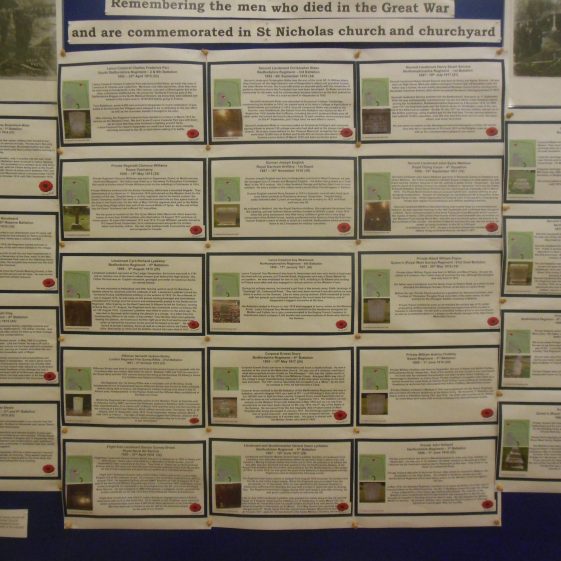 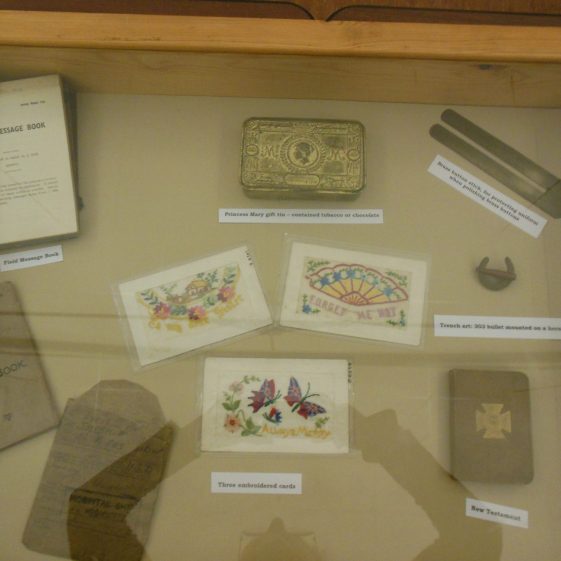 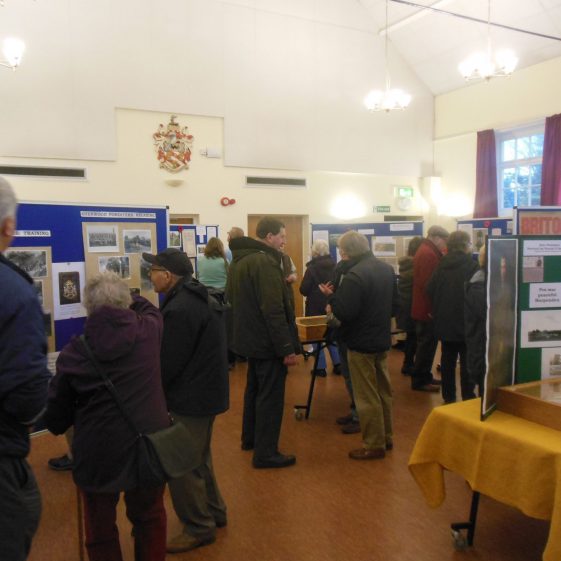 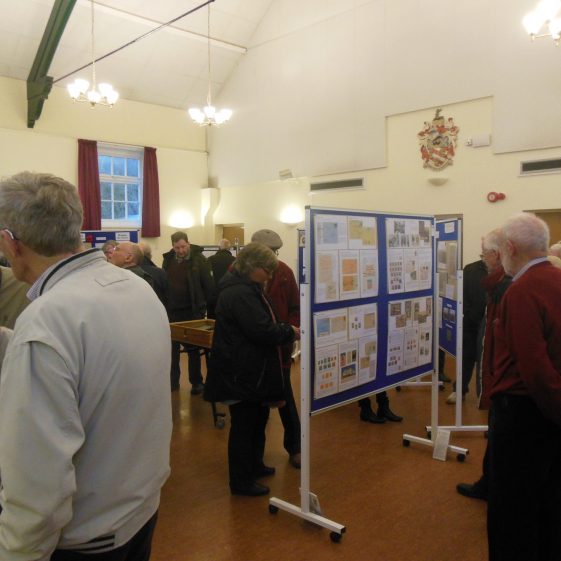 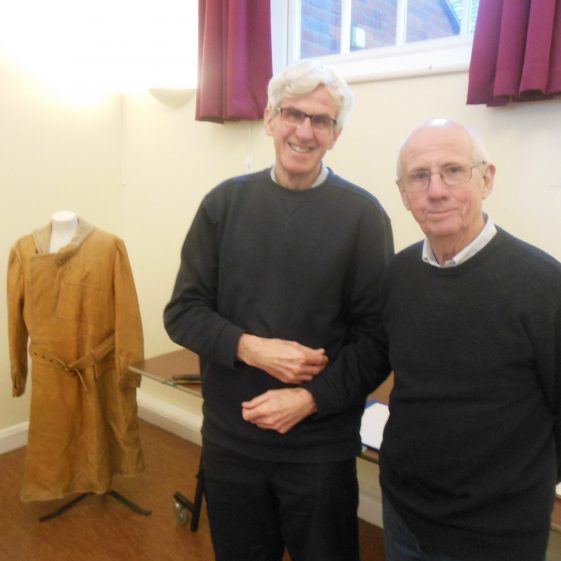 David Keen, Curator, and John Bristow, treasurer of the Local History Society - together with a leather great-coat
G Ross, 1 December 2018