You are here: HomenextHarpenden HistorynextTopics - from Archaeology to WartimenextWartime - Boer, First World War in Harpenden (WWI)nextThe Home FrontnextMy memories of Harpenden during the Kaiser's War

My memories of Harpenden during the Kaiser's War

Looking back over 50 years 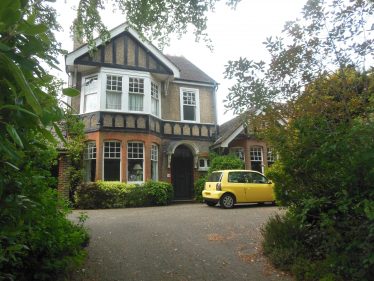 From Hertfordshire Countryside No.110, June 1968

My father, George Williams, brought his family to Harpenden around Christmas 1905. My four brothers and sisters had been born in London and I, the fifth, was the only one born in Harpenden. Father bought the first house ever built by Mr Ernest Jarvis (1). Our house was at the top of Moreton Avenue on the left-hand side and Ernest Jarvis’s own house (no.13) was half way up on the right-hand side. The night our family arrived in a horse-drawn cab Moreton Avenue was still impassible and they had to come up Moreton End Lane from the Luton Road. I can remember Moreton Avenue being made up and the cutting of deep trenches for sewers in about 1911.

It is an interesting reflection that when Harpenden was a newly formed urban district Moreton Avenue was made up extremely smartly within a year or two of houses being first built on it, whereas in the 1930s Harpenden became notorious for having more miles of unmade private streets than any other place in Hertfordshire. 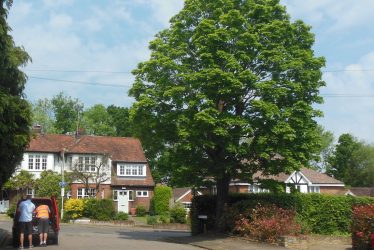 When my father bought it our house had an acre of garden, but later he bought a great deal of Mr Climpson’s nursery, which lay to the west of us, and we eventually had three acres. Moreton End Lane, running uphill to the house of Mrs Little, the former licensee of the George public house, bounded our garden to the north. Beyond that there was a narrow meadow called the Cow Field (2) and then came the Harpenden to Hemel Hempstead railway. Beyond the railway was nothing but open country as far as the eye could see except for Mr Catton’s white farmhouse (3) fronting on to Roundwood Lane about a mile to the north. I saw the hunt kill a fox in the Cow Field at the very end of Moreton Avenue. Moreton End Lane, both uphill and down, used to frighten me, as it was a narrow lane with high holly hedges that arched overhead; but one could reach the open fields beyond the railway by means of a level crossing and this was glorious mushrooming and picnicking country.

I went to school at St Hilda’s at the bottom of Moreton Avenue in January 1913, but my memories of that period are mainly concerned with the start of World War I. The Notts and Derbys arrived in Harpenden during August 1914, and we had a corporal and seven privates billeted in our house. For several years, we were never without half a dozen soldiers, but there was also a camp in the Cow Field. 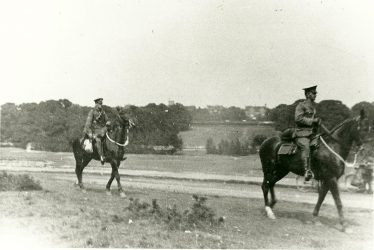 I remember a Lieutenant Warren arriving on a charger at our front gate to inquire who was the owner of the field. I was allowed to ride on his horse and to examine his drawn sword. A camp was soon established in the Cow Field and was there for about a year, which enabled my brothers and me to learn all the routine bugle calls.

A remount depot was established on the triangle of the common, and several times I saw runaway horses bolting down the middle of the High Street. Some of the units that were posted in Harpenden beat the retreat formally on Church Green every evening. Mr Ernest Jarvis, who had remained a close friend of our family (he used to sit in our house and look round commenting on the mistakes he had subsequently learned to avoid), took my brothers and me up to London in his Austin car one day and bought for us masks and outsized artificial hands. He timed his return to coincide with the review and drove slap through the parade, weaving in and out of the officers with all of us wearing masks and wigs.

The war provided a considerable compensation to schoolboys in the number of aeroplanes that made forced landings in the fields around Harpenden. The big field immediately east of the two water towers in Shakespeare Road was a popular place for aeroplanes to land. Every week or two one would stutter and start to circle while the pilot looked for a safe field. There was a particularly large field between the National Children’s Home and the sanatorium. On one occasion an aeroplane landed here and later another flew over and the pilot came down to see if we could help. Unhappily the second one ran straight into the back of the one already on the ground, so both had to be dismantled and carted away. 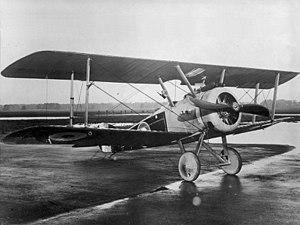 There was a brilliantly sunny morning when a Sopwith Camel appeared about six o’clock and landed in this field. The pilot was an ‘old boy’ of the National Children’s Home. After breakfast he gave the first display of stunting I had ever seen. His final manoeuvre was a spin from which he emerged at half the height of an oak tree alongside me, but he levelled out safely. Not only aeroplanes but many balloons came down. As they prepared to land they would trail grapnels which crowds of children would chase, frequently catching hold of the rope and having a short ride.

Although there were only 6,000 people living in Harpenden during World War I it was surprising what a large area they were spread over. Visiting friends often meant walking a couple of miles, although as boys we always ran. The normal way of going anywhere was to get into the centre of the road and run, whether by day or night. We never dreamt of traffic. Dr Fraser had a car, so did Mr Talbot and Mr Austin Reed, but there were probably not more than a dozen cars in the whole village. The shops in the High Street kept distinctive horse-drawn carts for their deliveries. Piggotts had an extremely smart two-wheel trap which was little more than a box set on an axle. Wests had a two-wheeler with a cool white hood. Sandringham Dairies had the distinctive open chariot for delivering milk. But there were so few of these vehicles that the roads were completely safe.

When I began to go to Hardenwick School in 1916 I went by bicycle. It was normal to go down Douglas Road with your brakes off and shoot across Luton Road as fast as you could so as to keep up speed for climbing Byron road ahead of you. If mother wanted to give me a treat in the holidays she would take me on a walk to St Albans to have tea at Buglers and we would walk from Harpenden to St Albans right down the centre of the main road. There was no footpath. The occasional motor-lorry or car could be heard coming a mile away and you moved to the side of the road in good time.

I was just old enough during the war to realize how sharply Harpenden was divided in three social sectors. There were a number of old families, such as the Sidebottoms, Lydekkers, Bennetts and so on, who antedated Harpenden’s development as a London suburb and who thought of themselves as living in Hertfordshire rather than in Harpenden. Then there was a solid phalanx of well-known families who lived in the village for the sake of their businesses, sometimes for generations past. Then thirdly there were the London season-ticket holders and their families. At one time 2,000 people out of 6,000 held season tickets. I started going to school in London in 1920, and thereafter for six years travelled sixty miles a day by train. As I headed towards the station to catch the 8.10 it was like being part of a flood tide (4). Men were emerging from all directions, gradually accelerating their pace as they got nearer the station and heard the train running in. This is the one respect, I imagine, in which Harpenden is the same today as it was in 1920.

(1)  Moreton Avenue, EC Jarvis’s first development in Harpenden, is first mentioned in Kelly’s directory for 1906, but no houses were yet occupied. From 1907 Mr George Williams is listed at “St David’s”, which was not numbered until 1930, when it became 18 Moreton Avenue. The Williams family were listed at this address until 1936. EC Jarvis had moved to 13 Moreton Avenue by 1911, and by 1922 he was living with his family at Gorselands, Queen’s Road.

(2)  Cow Field was developed in the 1920s. From this description it did not appear to include areas now developed as Moreton End Close and Moreton End, where the land between Moreton End Lane and the railway line widens. 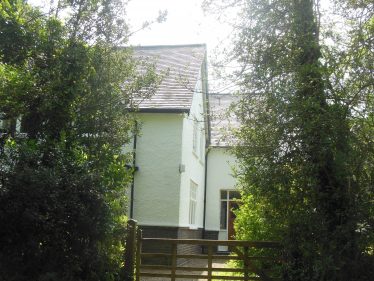 Holly Lodge, Roundwood Lane – was this the original ‘Roundwood’?. Credit: Rosemary Ross, 22 May 2018 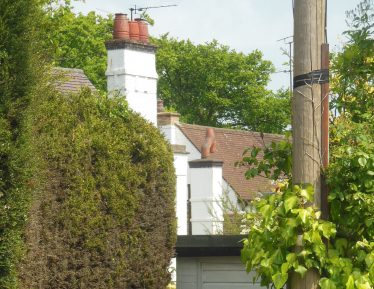 It is proving difficult to pinpoint Jesse Catton’s first house in Roundwood Lane – ‘Roundwood’ – where he was listed in Kelly’s directory for 1913/14, together with Frederick Hawkins. Possibly the house later listed (and still known) as Holly Lodge was the white farmhouse referred to.

By E A Williams MBE MA, written in 1968 for Hertfordshire Countryside