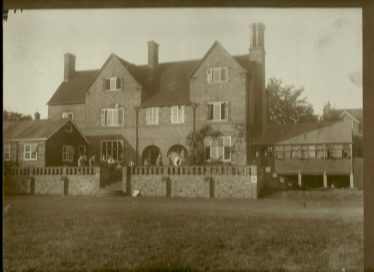 zoom
Rosemary Hospital from the garden, with recreation room on left and additional ward on the right, 1917
LHS archive 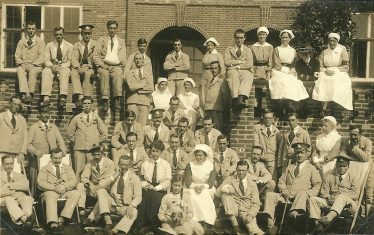 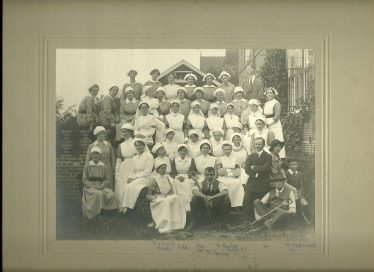 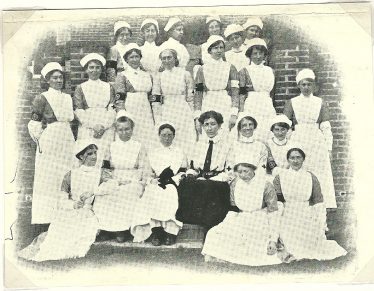 The hospital opened with accommodation for 30 patients.  There were 6 wards for medical and surgical cases, an isolation ward, and a small ward for officers.  There was a well-equipped operating theatre, a dispensary, and an outpatient surgery.

It was a Military Reception Hospital, under the control of the Royal Army Medical Corps, staffed by Army Doctors and RAMC Orderlies.  The professional nursing Sister-in-Charge was Mrs A L S Lovell of the British Red Cross and St John Joint War Committee.  She gave a thorough and valuable training to the VAD members and RAMC orderlies alike.

The catering arrangements were managed by Mrs F M Oakeshott assisted by other VAD members.  “The varied and appetising menus that they produced from the basic foods supplied by the Army authorities were much appreciated,” wrote one grateful patient.

The hospital was open from 21st October 1915 until 3rd May 1916 when the troops left Harpenden.  During those 6 months there were 344 patients in residence, over 2,000 outpatients were treated in the first 3 months.  In September 1916 Dr Kelynack was appointed  to hospital duties in London and resigned as Commandant of the Harpenden VAD.  The Committee unanimously appointed Mrs Oakeshott to the post.

There were no troops in Harpenden at the beginning of 1917, but Mrs Oakeshott learnt in February that auxiliary hospitals were desperately needed to relieve the pressure on the big military hospitals. She called a public meeting, at which it was agreed to re-open “Rosemary”. It was to be affiliated to the main hospital at Napsbury, and would act largely as a convalescent nursing establishment for patients transferred from there.

It re-opened on Wednesday 14th March 1917, and 25 patients were admitted on the following day. In September an annexe was built, designed by Eustace Salisbury, to provide accommodation for 8 extra patients. It cost £250, which was provided entirely by donations from the people of Harpenden. At the same time a veranda was built for the use of patients needing open-air treatment.  The hospital was then able to provide 42 beds.

One soldier had cause to be grateful that the hospital had re-opened.  Three days later, on Saturday 17th he was returning to his unit at Beckenham in Kent from home leave at Nottingham. He left Nottingham on the 7.15pm express train to St Pancras, and shortly after the train left Luton he felt unwell. He opened the carriage window and leaned out to get some fresh air. The door flew open; he fell onto the track and was knocked out. When he recovered consciousness he limped, very painfully, along the line towards Harpenden. As he reached the signal box one of the railway men there helped him along to the station. The police were notified, and they took him to the hospital, where he was admitted half and hour after midnight. He made a good recovery and was discharged ten days later.

The patients were convalescent, or “walking wounded”, as they used to be called, and were able to take short walks away from the hospital. As the winter drew in the Rector was concerned that the men should not lose this opportunity and he encouraged local people to invite one or two soldiers to their home for the afternoon.  He also said that he would be happy to lend the Rector’s Room near the church for people to invite larger groups. Mrs Wilson of Rivers Lodge had already invited a couple of groups, one from Harpenden and one from Napsbury for afternoon tea.

Concerts were arranged for them from time to time. In December 1917 Mr and Mrs Nott organised one at the Public Hall [now Park Hall], attended by about ninety soldiers from Harpenden and Blackmore End hospitals, where children from the National Children’s Home gave an excellent entertainment which the soldiers greatly appreciated. Refreshments were provided, and cigars were distributed by the hosts.

On Christmas Day “the hospital was gaily decorated, and fifty people, including forty-three patients, sat down to dinner, the repast including roast turkeys: gifts from a heavily-laden Christmas tree were presented during the afternoon, and in the evening there was supper, followed by an entertainment arranged by Miss Phyllis Russell.”

The war ended on 11th November 1918: the last patients left Rosemary Hospital in February 1919.  Two hundred guest attended an “At Home” on Thursday 20th February at which Mrs Oakeshott  was presented with a silver plate* by the County Director of VAD hospitals, who said that he had never received a serious complaint about Rosemary Hospital in the whole of its existence.

*The inscription on the plate read:

“ST JOHN’S AMBULANCE ASSOCIATION, PRESENTED TO
MRS OAKESHOTT By the VICE-PRESIDENT & VOLUNTARY AID DETACHMENT, IN APPRECIATION OF HER DEVOTED SERVICE TO THE CAUSE OF SICK & WOUNDED SOLDIERS IN HOSPITAL IN HARPENDEN, 1917 – 1919″

[Mrs Oakeshott was made a MBE in 1921 ‘in view of the service you have rendered on work connected with the War’.]