You are here: HomenextHarpenden HistorynextTopics - from Archaeology to WartimenextWartime - Second World War (WWII)nextEvacuees - Personal memoriesnextBy bus from Enfield to West Common on the day war broke out - 3 September 1939

Memories of an evacuee 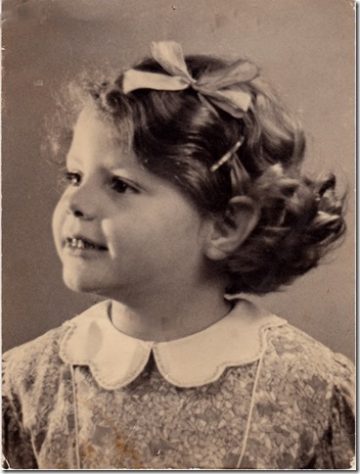 Iris Page (nee Bone) was evacuated to Harpenden from Enfield and so must have arrived with the buses which brought 1,200 evacuees on Sunday, 3 September 1939. She contacted us after reading John Olley’s account of evacuees and adding a comment. It seems she was among the last to be placed, and was taken to 63 West Common, home of Mr & Mrs Milner by Mrs Lewis, who was one of the WVS organisers for the reception of evacuees. Iris is preparing* to write up her memories for her grandchildren and has sent us these memories, edited from her email, and supplemented by her sister Lily (Lilian Warren):

* Iris has now completed the first part of her account of childhood memories, and this has been added as a downloadable document at the end of this page.

First with the Milners

I was sure I was 3 but I find it hard to think my mother let me go with her neighbour, Mrs Norton, and then for the neighbour to return leaving me with strangers, although my sister remembers that the Nortons had been looking after me. But it’s nice to know the date.

I do know we were about the last evacuees left and Mrs Lewis begged her neighbour, Mrs Milner to take Mrs Norton, Bobby and me in which she kindly did – that was Blythwood. 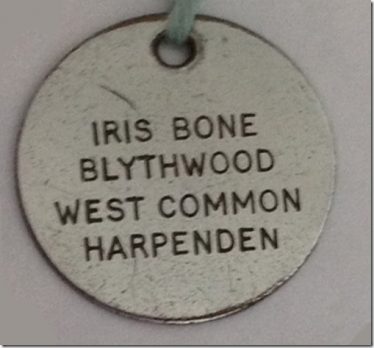 Very quickly Bobby and his Mum returned home leaving me there. I was looked after by Nanny Bickerstaff with Jane and David Milner. That is how I started off there – at 63 West Common. I have remained in touch with Jane Milner ever since. 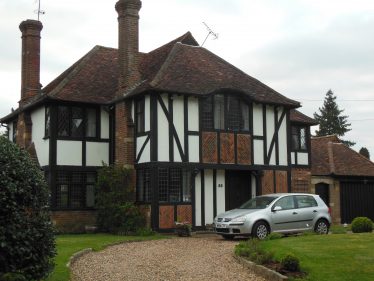 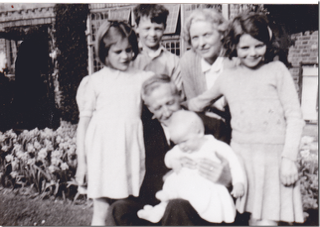 Iris (on the right) with Jane, David and Mrs Milner, and Sarah Milner on the lap of Mr Harris, the gardener. Credit: Iris Page 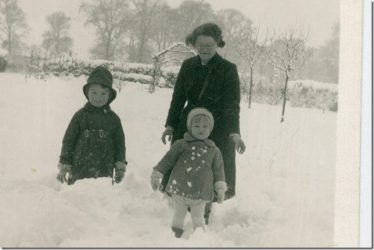 I bet there were not many evacuees who had a Nanny to look after them. I stayed at the Milner’s for about 5 months as I remember Christmas opening this big box with a grey tin dolls pram in it, bought for me by Nanny and the maid. Mrs Milner had family who had to come and stay so I then went to live with Mr and Mrs Lewis, presumably early in 1940.

Then with the Lewises 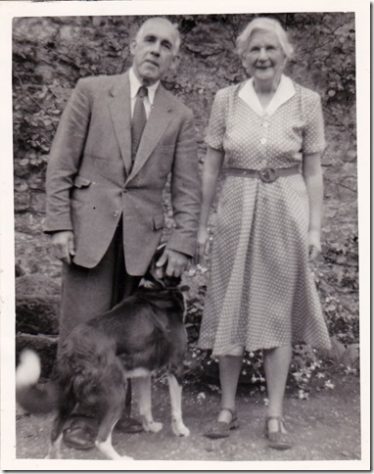 Mr and Mrs Lewis in 1956 – but they hadn’t changed much. Credit: Iris Page 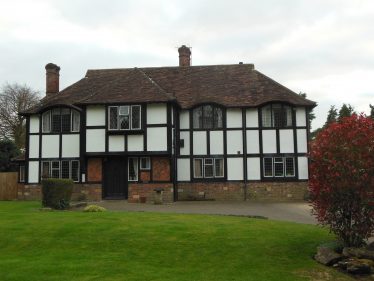 The Lewis’s house was named “Woodredon” (64) and the Milner’s Blythwood (63). The Lewis’s lived there from when it was first built by the Jarvis’s in 1932. I am still in touch with Jane Milner and have visited her in Cornwall. She is my age. I met up with her last summer and also with Margaret Bell who became my best friend in Harpenden. She helped out at St Hilda’s until she was old enough to start her nurses’ training.

Mr Lewis, a Bank Manager with the Foreign Department of Westminster Bank in Threadneedle Street, London, was in charge of the Home Guard, and I have enjoyed the humorous poem about the 2nd Platoon (in which he is mentioned. There is a copy in the local history archives ed.). 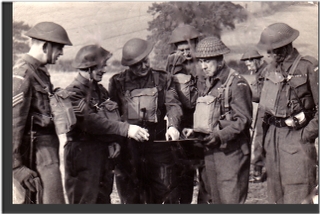 Home Guard on practice in Harpenden – Mr Lewis is third from the right with the biggest mesh on his hat and I remember Mr Chappell the third from the left. Credit: Iris Page

I was too young to remember how I felt, but I do remember sitting in the back of the car feeling the bumps in the road and not being able to see out of the window. It was an Austin 16, registration number DEL 943 – the initials of Mrs Lewis – Doris Evelyn Lewis. My husband later met a man in Cambridgeshire who had worked at the garage in Batford which the Lewis’s used to visit and he said the car was then used by them as a wedding car: he even remembered the number plate. I would love to have spoken to him but the Lewis’s transferred the plate number to their new car and had the same one until they sadly died. 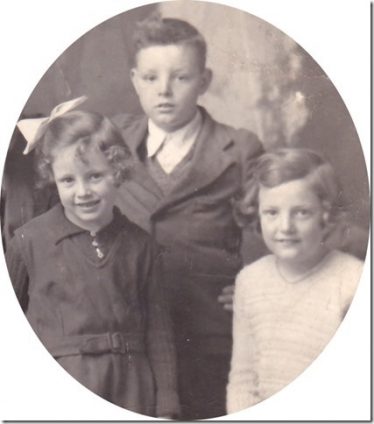 I know we must have come with a school party (from Brimsdown School, Enfield) as my brother and two sisters Alfie (9), Gladys (5) and Lily (7) Bone came as well and so did the daughter of the lady who took me to Harpenden plus her son who was about 3 as well. Alfie, Gladys and Lily were billeted briefly with the Samuels, possibly in Batford.

My sister Lilian Warren, now living in Queensland, Australia has written her memories – see below*. Sadly my other sister has Alzeimhers and my brother died many years ago. 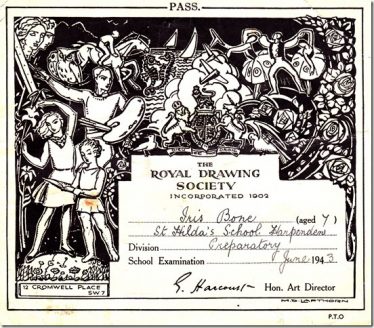 The certificate I won at St Hilda’s for drawing a floor mop upside down with the school beret on top. Credit: Iris Page

I attended St Hilda’s School and had hoped they might have a record of when I left. It seems they don’t have a trace of me, but I have the certificate I won for a picture. I believe I stayed until some time after the end of the war, but I must have returned in 1945 as I remembered my younger brother being born.

I went home to a family that eventually had 9 children so you can imagine what a change of lifestyle that was after what I had had. I had a wonderful time living with the Lewis’s – who had even wanted to adopt me – and I have lots of happy memories: picking rose hips for the W.V.S. and gleaning corn for the chickens on the common. 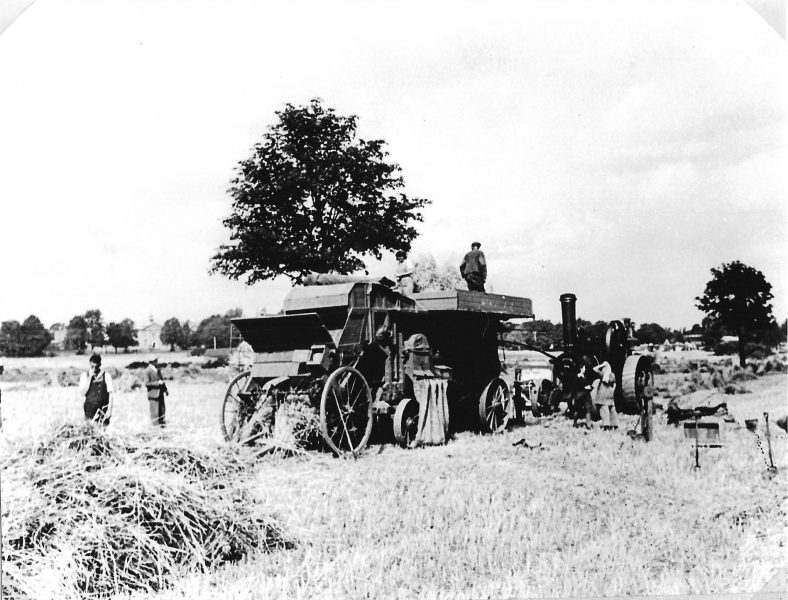 I used to walk with my dolls pram from West Common to Bloomfield Road where Margaret lived – which was quite a long way. Children would not be allowed to do that today. 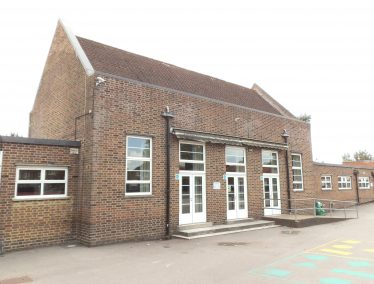 “My memory of Harpenden is very sketchy. I do remember getting on the double decker bus outside the Brimsdown school. We all had a kitbag each and a name label pinned to our coats. I recall we were excited going on a journey and rushed upstairs on the bus – mum waved goodbye. She had stipulated that we were not to be separated and for that reason nobody would or could take us so we were the last to be sitting in this school or hall. A lady who had a corner shop, (general store) agreed to take us for just the one night and in the morning we were taken to a little row of cottages where one lady took Alfie and about two doors away Gladys and I went to this couple called Samuel** – I think they were brother and sister. I remember we shared a bedroom and the biscuit and cocoa as a bedtime drink. The stairs were narrow and we were escorted by the lady carrying a candle.  I have no idea how long we were there but Dad came to see us and we were all very unhappy so he got us home – to 16 Frederick Crescent, Enfield. 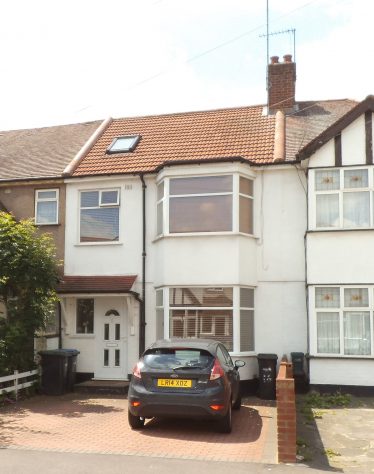 One of my memories of that time that has never left me is the sound of the Westminster chime in the hall of the lady who took us in for that one night, I still cringe when I hear one and hate them. How Iris managed to go on that journey as well I don’t know unless a Mrs Norton who had a daughter and son Yvonne and Bobby went too. They lived a few doors from us in Frederick Crescent and Iris was looked after by her. I seem to have a vague memory of them.”

** ed. We have tried to identify where the Samuels lived, so far without success.

Iris Bone's childhood as an evacuee in Harpenden (3 MB PDF, opens in a new window)