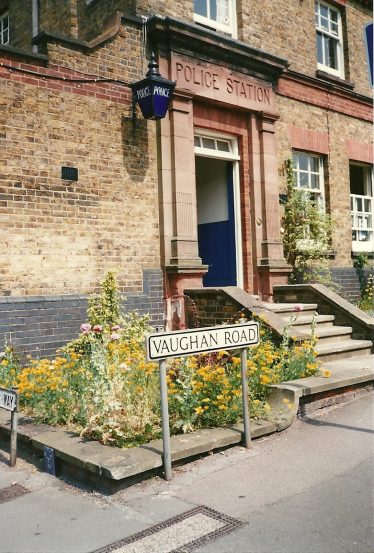 Police Sergeant Edward R Childs was living with his wife at the Hertfordshire Constabulary Police Station – 15 Vaughan Road – from 1939 and during the war years. He later wrote this summary of his detailed observations, a copy of which was donated to our archives in the 1980s. We have edited where it was in note-form, and up-dated place-references. It is of particular interest for information about the many army units which passed through, trained in or were evacuated to Harpenden – in addition to the many civilian evacuees (hand-written original in BF 30.1A:

Air Raid Precautions Corps having been well organised from early 1938, Harpenden boasted one of the best organised Control Centres in the County, having, in the Old Public Hall in Leyton Road, a well-equipped underground centre some 20 feet deep which could be ventilated with a pedal cycle-powered fan. In the early days the late Percy Claridge and his technicians converted the then Victoria Schools, later the Library (now Harpenden Academy), into a Red Cross Centre duly equipped with a large operating theatre. This called for round the clock work to complete, and was staffed night and day by a squad of Red Cross Nurses under a Mr Doveston.

The whole of the Civil System, later to be called Civil Defence, was so highly trained that the Chief Constable of Luton, a Mr Scott, on one of his many visits, made a comment that he counted on the Harpenden Mobile Column as his first reserve, in the event of heavy bombing of Luton.

After the Declaration of War on Sunday 3 September 1939 we took in our first child evacuees by train from London.

The Military, in the shape of Eastern Command evacuated from their headquarters at Hounslow to Luton Hoo using billets in any vacant houses in Harpenden. The 5th Battalion Royal Tank Regiment, returning from India, based their Headquarters at the Red House. Some peculiar shaped armoured vehicles were to be seen in the streets and on the Common, but were soon replaced with fast moving Cruiser Tanks.

A Colonel of First World War vintage arrived at the Police Station to organise leaders for four platoons of Local Defence Volunteers. These were soon found and quickly commandeered the new Health Centre (40 Luton Road?) as Headquarters resulting with a Mr Reggie West as Zone Commander, with a Colonel Wenham as one of his assistants – these of course, surfaced as Home Guard.

Eastern Command’s presence was felt. The Covered Market, now Sainsbury’s, was the Transport Depot. In commandeered houses in Wheathampstead Road the original Special Investigations Branch of the Military Police was formed alongside the detachment of Red Caps of the same regiment.

The invasion of France  saw a company of the Royal Corps Signals evacuated from Dunkirk, being some of the last troops to escape.  These came straight into Harpenden to Rothamsted Park where they bivouacked under the trees, their wireless aerials flung up on the branches, and commenced interceptor work. Most of these were very young ex-Post Office Telegraph Engineers and in a very shell shocked condition.

Nissan Huts suddenly appeared all over the town and district; quite a village appeared in the “Granary” at the end of Cowper Road – now Gilpin Green – and in the large Roundwood Park area.

The Parachute Invasion of Holland called for barbed wire entanglements on the top of the Post Office with an Army armed guard on the landing of the then Telephone Exchange. “Dawn and Dusk” observation posts were manned on the Common – Police and Home Guard. The Royal Tanks moved out to the Desert and Eighth Army and were followed by the Royal Ulster Rifles.

We were getting through 1940. Food rationing was well established in the Small Public Hall under a Mr Bateson. The general public was now well-disciplined to carrying Gas Masks.

Entertainment for the Troops

During this period the Eastern Command had an Entertainments Officer – one Major “Bill” O’Brien of First World War recall, whose purpose was to organise “Stars in Battle Dress”. These were parties of actors called up for service and who, after Basic Training, were grouped and rehearsed in the Public Hall, then sent out to various Battle Zones.

Some of the first Enemy Aliens to escape through Czechoslovakia, holding the fated “J” endorsed passport signifying “Jewish” and endorsed subject of Nazi Oppression, arrived in the early days at the Quakers’ Hall, Southdown Road.

The renowned 51st Highland Division came out of the Desert, as General Montgomery had Rommel on the run. These stayed and did training ready for D Day. They were followed by the 177th Infantry Regt of American forces who, after a few months, left to take up Invasion Stations.

1944 saw the first of the Flying Bombs, originally known as P.A.C. (Pilotless Air Craft), which arrived in a field at Down Green on Wheathampstead Road; about a week later another fell at the rear of Wheathampstead Church. Shortly after one arrived one Sunday morning, passing over the Wesley Church in Vaughan Road/High Street, in full view, less than a thousand feet up, exhaust ablaze and landed at the rear of Hammonds End Farm in a spinney, wrecking all Stanley White’s windows. Parachute Mines missed us; one landed unexploded on Bowers Heath, one other in same condition at the Bus Garage, Park Street, Luton. These were disarmed by R.N. Bomb Squad and blown up, with the unexploded bombs from Vauxhall Works, at a rubbish tip then on the Codicote Road near Wheathampstead.

The afternoons of the autumn and winter of 1943 were livened as the Bombers came up and circled around our district. This would begin around 2.30pm with a few squadrons of Lancaster Flying Fortresses until the sky was blackened with hundreds as they came up from all the surrounding Airfields – Lincolnshire, Beds, Bucks.  They circled and climbed and then by 3.30pm they would turn, open up and roar off for night raids, returning from 2am onwards.

I am reminded of the establishment of Searchlight Posts in the area, manned by Woman Royal Army Corps, who came in 1940, with one at Beeson End Lane and one at Mackerye End. These were used as beacons for the returning bombers.