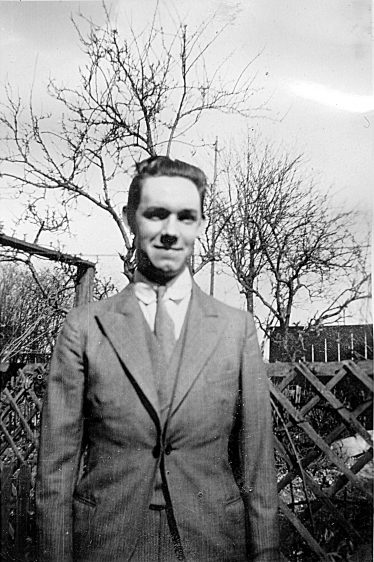 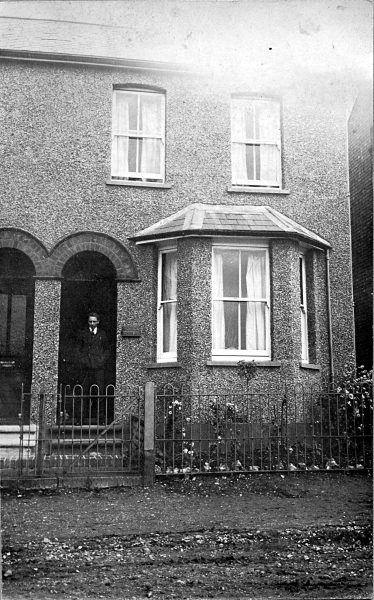 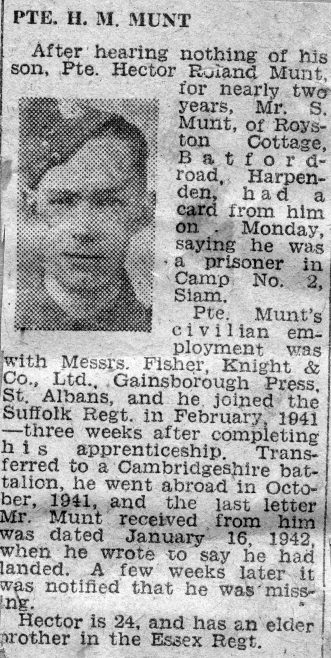 Press-cuttings and photos in Di Castle’s family albums have recently been digitised for the Society’s archives.  Di’s father was Ken Munt, elder brother of Hector. If any reader has information about the other families, please add a comment or contact us.

“Two Harpenden men and one from Kinsbourne Green are additions to the list of those freed from Japanese prison camps.

Pte Percy Lawrence, 8 Harpenden Rise, Harpenden, who has been freed, was employed in Harpenden Council Offices from 1932 until he joined the Army. In 1940 he married Miss Edna Barlow, of Rickmansworth.

Private Hector Roland Munt of Royston Cottage, Batford Road, Harpenden, has been freed and is in India.  He was employed by Fisher, Knight and Co.Ltd, Gainsborough Press, St Albans, and has an elder brother in the Essex Regiment.

Mrs G Robinson, of 10 Fiddlers Hill, Kinsbourne Green, has heard that Stephen, one of her three soldier sons, was in a camp in Siam. He had written from Bombay, and the news arrived while his oldest brother was home on Python leave. Stephen worked for Mr Catton, The Ridge, Harpenden.”

After hearing nothing of his son, Pte Hector Roland Munt for nearly two years, Mr S Munt of Royston Cottage, Batford Road, Harpenden, had a card from him on Monday, saying he was a prisoner in Camp No 2, Siam.

Pte Munt’s civilian employment was with Messrs Fisher, Knight & Co.Ltd, Gainsborough Press, St Albans and he joined the Suffolk Regt in February 1941 – three weeks after completing his apprenticeship. Transferred to a Cambridgeshire battalion, he went abroad in October 1941 and the last letter Mr Munt received from him was dated January 16, 1942, when he wrote to say he had landed. A few weeks later it was notified that he was missing.

Hector is 24, and has an elder brother in the Essex Regt.”