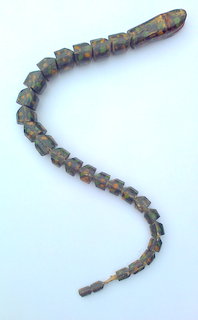 The page ‘No 95 Batford Prisoner of War Camp‘ tells how there were classes and entertainments etc available for the men to help occupy their time, but some also made small gifts.

Anne Esson tells us about POW Gerhard and the bracelet he made for her. Alan Thrussell and his brother were given this toy snake by German POWs who were still in Harpenden after the end of the war. Alan was 5 or 6 at the time and his brother some 5 years older and they used to see the POWs on Westfield Recreation ground. The men used to push the swings for the children and Alan says that he believes the older boys bought Woodbines for the prisoners (were the men not welcome in the shops, I wonder? ed). Alan assumes the POWs gave toys to the children as ‘thank yous’.

He lent the snake to the Society for display at the WWII exhibition on 6th September 2014.