Anne Esson now lives in Greater Manchester. She recently discovered our page about the POW camp at Batford, and it reminded her of Gerhard – one of the POWs. 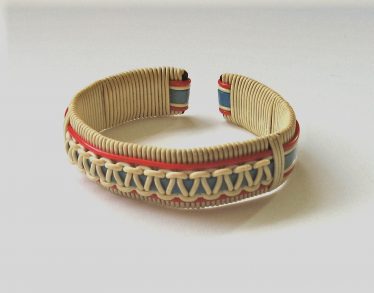 The bracelet given to Anne by Gerhard. Credit: Anne Esson

My uncle and aunt lived in a bungalow with a fairly large garden in Park Mount. Gerhard had been delegated to attend the house regularly, to assist with gardening and vegetable-growing duties.  He was a delightful, charming, and kind-hearted person.

Gerhard realised that my uncle had an upright piano in the sitting room, and tentatively asked if he could occasionally be permitted to play some music, after his work was finished. This was agreed, and my uncle and aunt soon realised that Gerhard was an excellent classical pianist.

They made a ‘private’ arrangement with Gerhard that he could spend as much time as he wanted, playing their piano, after minimal gardening.

When I was staying with my Harpenden relatives during that summer period, as a break from my home in chaotic East London, I have clear memories of Gerhard always lifting me onto a chair next to the piano, as he played beautiful music. I was enthralled.

My uncle explained to Gerhard that my own father had been lost in 1941, as an Officer in a Merchant Navy Atlantic Convoy.  Although I was far too young to understand what it all meant, Gerhard was, I remember, genuinely distressed by this information, and hugged me tightly in front of my uncle.

The following week Gerhard gave me a present, which he had personally made “with love”, back at the POW Camp.  It was a small bracelet, made of metal and entirely covered with many carefully-placed strands of plastic-covered fine wire in red, white, and blue patterns.

I still have this bracelet – and cherish it to this day.