A firm settles into Harpenden in 1939 for the war years

An original copy of the notes below have been placed in our archives by Robert Brigham whose grandfather and subsequently his father were Company Secretary.

F.P.& C stands for ‘Friends Provident and Century Life’ now ‘Friends Life’ and they had this plaque placed at the entrance to Rothamsted Park. 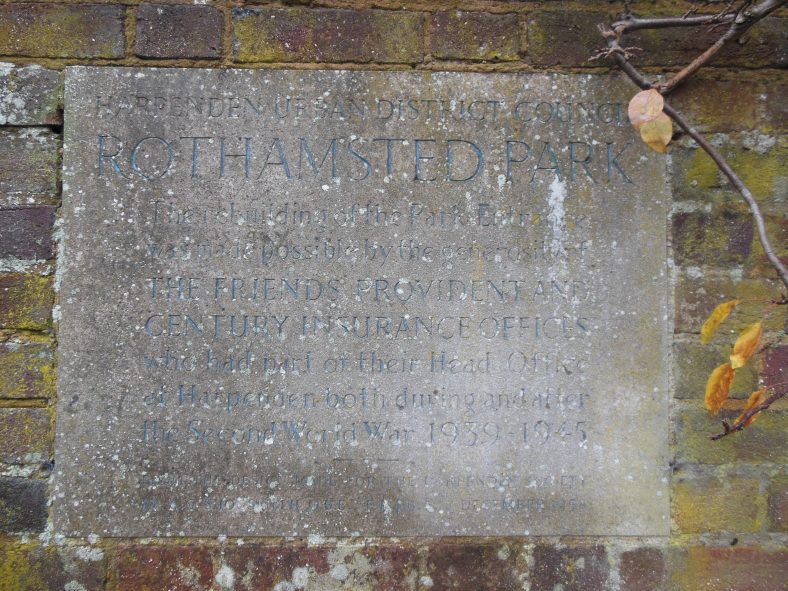 Plaque at the entrance to Rothamsted Park. Credit: Rosemary Ross

FROM THE DESIGN MADE FOR THE HARPENDEN SOCIETY By A.G. SHOOSMITH O.B.E. FRIBA DECEMBER 1958 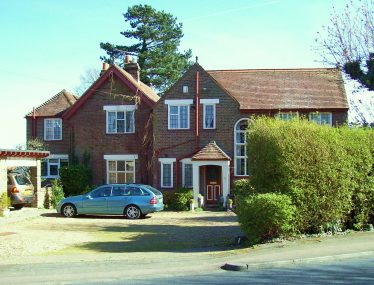 The notes include the information that the firm used The Red House,  6 and 8 Milton Road and somewhere in Meadow Walk.

The Accounts department had a building in the garden of the Shrubberies, Morten End Lane the home of the Brighams at the time.

Across the top is written ‘First war time notes’ and they read:

With the transfer of the large majority of the Head Office Staff to its new quarters the activities of the Sports Club must inevitably be almost wholly centred in Harpenden;  this does not mean that its programme will be restricted – on the contrary this, our War Communique No. 1, indicates that  now everyone is well entrenched in the new surroundings and the preliminary skirmishes have been made towards providing the necessary  accommodation for recreation, there will be great activity on the Harpenden front.

The Committee ask members to give them their full support by attending functions and taking an active part, where possible, in the sports available.  For instance if you don’t play football you can at least support the players when there is a match.

There is now a real opportunity to make the Sports Club a great success but this will depend almost entirely upon the members themselves.  The  Committee cannot do more than provide the facilities; it is now up to the members to do their bit and make the various sections go with a bang.  The Club is run for your benefit and upon the extent of the interest shown must depend the nature of the programme which the Committee will be justified in arranging.

In view of the considerable expense entailed by the proposed arrangements it will, as heretofore, be necessary to limit participation in the activities of the various sections to Playing Members of the Club.  The subscription for playing membership is 1/- per annum and 2d per week, but any[non] playing member who now wishes to transfer to the playing category may do so as from the 1st October subject to payment of the weekly subscription as from that date.  It has moreover, been decided that the benefit of membership of the Club shall be extended to members of the family of playing members, subject to payment of an entrance fee of 1/- and weekly subscriptions of 2d as from the beginning of October.

The Secretary has arranged with Kingston House, Sports Outfitters, High Street, Harpenden for the allowance of a discount on the purchase of Sports equipment from them.  Tennis, Badminton, Football etc. equipment can be purchased on these terms and anyone interested should ask the Secretary of the Sports Club, L. B. Marten, Accident Department, Red House, for a card of introduction which should be taken to Kingston House.

We are asked to make the following announcements in regard to arrangements sponsored by the Club which do not fall within the programme of any existing Section.

The Harpenden Methodist Guild have been good enough to extend a warm invitation to members of the Club to make use of their weekly gathering which cover a very wide field of interest.  The Programme for the months of October, November and December 1939 is as follows:

As previously announced all members of the Staff are very welcome to attend the opening Social  without being committed to membership of the Guild and Mr & Mrs Brigham, the Host and Hostess that evening  are kindly providing the refreshments.  For the remainder of the season an inclusive charge of 1/- per member is made, payable in advance to the Hon. Secretary of the Guild.

The meetings are held in the Hall adjoining the Methodist Church in the High Street and commence at 8 p.m. each Monday.

It is understood that the activities of the Guild make a wide appeal to many Harpenden residents unconnected with the Church.

Mrs Brigham will be very glad to arrange a meeting between any girls who would like to play hockey, and the Captain of the Harpenden Ladies Hockey Club.  Members from the F.P. & C.L.O. will be very welcome.  Games are played on Saturday afternoons.  Anyone interested should see Miss Hodgate, Life Department. Red House.

A furnished room will be available on Wednesday and Thursday evenings as from next week which can be used as a common room or meeting place for playing members of the Club.  The room is situated on the first floor behind the George Hotel and access is obtained by means of a covered stairway at the end of the passage-way on the south side of the Hotel.

The room will be found to be very suitable for cards etc. and it is hoped that we shall be able to provide light refreshments.

Miss Boyce of the Fire Department, Milton Road, has kindly volunterred [sic] to take charge and she will be glad to have offers of help and suggestions for running the room so that it will become a valuable social centre.

For those interested in riding there are stables which offer facilities at reasonable prices.  Will anyone interested please communicate with B.R. Blythe Brook, Accident Department, Red House as it may be possible to obtain specially favourable terms if there a number [sic] of people interested.

Will any lady with time to spare and willing to help this good cause by knitting socks or stockings, leave their name with or call on Mrs. M. Puddephatt 15 Milton Road.

The time is now approaching for the renewal of the Library Service arranged with Boots Booklovers’ Library as the present subscription will expire on the 1st November 1939.  Will members desirous of renewing their subscriptions and intending new members should obtain an application form from Miss Holdgate, Life Department, Red House.

Membership token at present in the possession of existing members should be presented to the Library with the application for renewal.  It is essential that this application should be made on or before the 1st November 1939 in order to avoid delay in the issue of the new membership token.  The new token will be available within six days of the date of renewing the subscription, and an opportunity should be made of collecting this token in this peridd [sic] from the branch at which payment was made.  Failing the renewal of this subscription any subscriber detaining the property of the library beyond the period subscribed for will be charged for such detention at the ordinary subscription rates for the number of days books are retained beyond the expiry date; whether subscribers renew or not present tokens must be surrendered upon expiry.

As there is a good Boots Library in Harpenden, it is hoped that a large number of people will avail themselves of this facility.

Facilities are now definitely available for Badminton on Tuesday, Thursday and Friday of each week from 6p.m. to 10p.m. at the hall of the Harpenden Badminton Club just off the Luton Road between Moreton End Lane and Moreton Place.  It will be necessary to charge a court fee of 6d per night and members will require to supply their own racquet, but the club will supply shuttlecocks.

The response to the first circular has been embarrassingly successful in that 89 members of the staff  havd [sic]sent in their names.  If this number is maintained, this means setting up three sections of nearly 30 members each and allotting one night to each section and as 20 is the average to a Court per evening if a reasonable share of play is to be had it is apparent that only one night’s play will be possible for each member.

J. B. Muir has temporarily accepted the Secretaryship [sic] of the Badminton Club and in order that the necessary arrangements for the successful running of this new section can be put in hand a once, a meeting of those members who gave in their names for Badminton is called for Thursday 28th September at 5.30 p.m. at the Red House.

It was very disappointing to the friendly Centurions Dramatic Society to have to cancel their Autumn production, which was to have been “Love From a Stranger.  Members will be glad to hear, however, that the Society has been asked by the Methodist Guild to provide an evening’s entertainment on the 27th November.  We have been very pleased to accept the invitation and hope to produce one or two one act plays.

In response to a number of requests it has been decided to form a Soccer Section, and we have been able to secure a very good ground and the use of a Pavilion at Overstone Road, originally the Head Quarters of the Harpenden R.F.C  The ground has been taken provisionally for a period of three months but it is hoped, if the Section receives sufficient support, to continue it for the whole of the Season.

It is proposed to commence activities with inter-departmental or “House” matches and to arrange fixtures with other Clubs in the district, but in order to give as many members as possible an opportunity of participating in the Section it is intended to make internal games as distinct from outside fixtures, a regular feature.  In view of the expense entailed by the rent of the ground, it will be necessary to charge members a fee of 6d per game.

Volunteers will be required over this weekend to help mark out the ground, and it is hoped that some practice can be had during the evenings of next week in preparation for the first game on the following Saturday, October 7th, Red House v. Milton Road.

In the meantime D. Jackson, Life Department, Red House will act as Hon. Secretary, and members interested at Red House should apply to him.  Enquiries from 6 or 8 Milton Road or Meadow Walk should be addressed to E. Tungate, Fire Department.

The activities of the Society will be transferred to Harpenden Golf Club which  Club has  kindly offered specially generous terms to members of the F.P. & C. Golfing Society.  These terms are 15/- for one month and 30/- for three months with the right to play in competitions, except those for trophies.

It is hoped to play the final of the Inter Departmental Shield at Harpenden within the next month.  The competitors are The Secretarial Department “A” (N.W. Blair and P. Leishman) v Life Department (S. Juleff and M.M. Rind )

Three Table Tennis Tables and some dart boards as a side line, have been purchased and the Section will continue to function on Tuesday, Thursday and Friday evenings from 6p.m. to 10p.m. in the Hall of the Harpenden Badminton Club.

All playing members are welcomed on any of these evenings and it is hope that later in the season we shall be able to arrange the usual tournaments for the “Roundtree” and “Shera Atkinson” Cups.

Those members wishing to join the Elliswick Lawn Tennis Club, Harpenden, Herts. From now until December 31st can be elected to temporary membership without entracee [sic] for a subscription of 7/6d.  Further details from the Secretary of the Club, Mr. V.J. Roberts, Hayling, Carisbrooke Road, The Treasurer, Mr. D.B. Buick, 11 Manland Avenue (Tel 3441) or Mr. W.C. Moore of the Club address.