An overview of how Harpenden was affected by WWII 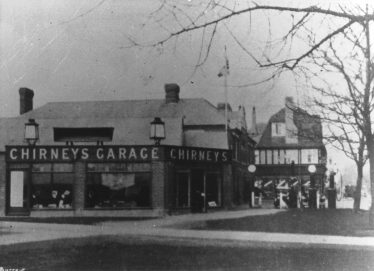 During 1938 the reality of a war was increasing to the point that preparations were seen to be necessary. A specimen air raid shelter was dug in Stewart Road, which residents were encouraged to visit and then copy in their own gardens, and on 23rd September 20,000 gas masks were delivered to the Old Public Hall. Even a special edition of the “Harpenden Free Press” was printed on 27th September 1938 to give details of Air Raid Precautions, and in May 1939 an A.R.P. display was put on in the Public Hall. May also saw completion of the new control room for the A.R.P. and the fire brigade, being 6 feet below ground, behind the fire station alongside the Public Hall in Leyton Road.

Concrete lined trenches were dug on the common near Heath Road, with seats and electric lighting (providing room for 400 people), completed in November 1939. Other shelters were built under the car park behind the Public Hall, under Leyton Green and under the green in front of Bowers Parade in the High Street. 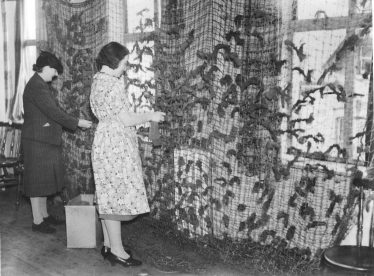 Meanwhile the W.V.S. had been set up on 27th January 1939 and they organised tea rooms for the soldiers and other valuable services, such as organising food schemes, providing clothes, knitting socks etc. and making camouflage nets, to name a few. Fears of invasion led to the forming of the Local Defence Volunteers in May 1940 (later Home Guard) and Harpenden people were very proud of the speed at which it was formed. The broadcast was made on the Tuesday, and minutes later the first people were signing on at the Police Station, and by the following Saturday armed patrols were in action.

With the onset of war, the Government requisitioned any empty property and also took over halls and garage showrooms, these being used for storage or soldiers’ tea rooms. Harpenden examples were St John’s Hall and Chirney’s garage (next to The George), whilst Read’s garage (in Bowers Parade) and Leyton Hall (Amenbury Lane) were run by the Salvation Army as canteens and recreation rooms for soldiers.

By this time children were being evacuated from London and some 1,500 came to Harpenden, provision for them being made with local families and at the Evacuee Boys’ Hostel at 20 Hollybush Lane, and a Medical Centre at 5, Bowers Parade, while a sick bay was provided at 13 Salisbury Avenue. Problems arose when parents visiting their children looked to the host family to provide them with tea as well, so to overcome this two shop units in Broadway Hall were taken over as Sunday Canteen to provide them with tea.

There was already a steam siren on Abbott & Anderson’s factory (new fire station site), but this was replaced in 1940 by a new electric one fitted on the water tower in Shakespeare Road, where the buildings were converted into an emergency fire station and a blanket store. Even animals were provided for when Mrs Hossack, at 100 Luton Road, set up an animal first aid post in June 1940. 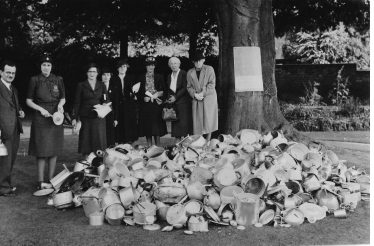 Volunteers with collection of ‘aluminium for aircraft’, outside the Public Halls, c.1940. Credit: LHS archives

When the call for scrap metal came in 1940 the Council set up depots behind Bowers Parade and at their yard by Skew Bridge in Southdown Road. Many a decorative railing was sacrificed, and aluminium saucepans were also collected for melting down. On Saturday, 17th January 1942, a parade went along the High Street urging more scrap to be handed in. 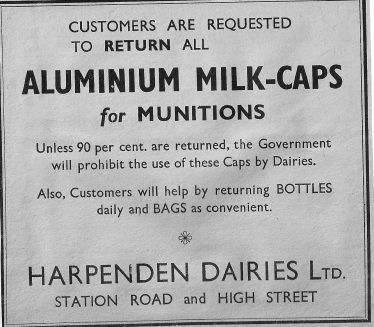 Advertisement for the collection of aluminium. Credit: LHS archives – LAF-NC 2.7

The Air Training Corps was set up here in March 1941 and trained 237 men before being disbanded in 1946. A decontamination centre was set up at Hollybush Laundry in Hollybush Lane in April 1942. The A.T.S. set up in Devonshire Road and had their headquarters above some shops in Station Road. Their transport department was in a house in Park Rise, security in Douglas Road and an ordnance dept at the Kennells at Kinsbourne Green, whilst Broadway Hall, off the High Street, was taken over for storage.

At this time there were many empty shops and houses in the village and businesses moved out of London to occupy them. The Westminster Fire Office (insurance) took over several shops in Bowers Parade, Century Insurance came to Milton Road, Southern Life to 8 Clarence Road, The Bank of Adelaide to 20 Milton Road and the Yugoslav Embassy occupied No. 53. The National Union of Tailors was at “Somerled” in Townsend Lane and the Friends Provident Insurance Company erected huts in the garden of The Shrubberies in Moreton End Lane for their offices.

Although bombs did fall in the Harpenden area, fortunately there was not a lot of serious damage. However the roof of Batford Methodist Church was burnt out on Sunday 12th May 1941 after a series of incendiary bombs were dropped. 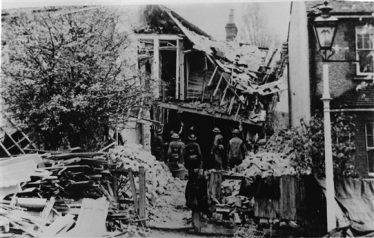 The only house to be badly damaged was 10 Crabtree Lane where, luckily, the woman and child took refuge under the stairs and escaped injury. A total of 180 houses suffered some minor damage. The Badminton Hall in Moreton End Lane was already out of use when the war started and was subsequently taken over by the War Department. However, in November 1942 it was empty when it caught fire and was gutted.

Kenneth Lockhart was the first officer from Harpenden to be killed and Sgt Basil Friendship of Church Green was the first man to be decorated, with the Distinguished Flying Medal and Bar. The local newspaper, “Harpenden Free Press”, ceased production during the war so the more local and personal details of Harpenden’s wartime existence have been lost. However, a small news-sheet, “Echoes From Harpenden”, was produced in 1943 by members of the Comforts Fund Committee and sent to all Harpenden men and women serving in H.M. Forces.

These sheets contained news of “Our Boys”, descriptions of the village in different seasons, club activities, hospital and Council news, etc. In the Red Cross column mention is made of “Mrs Painting who made £5.10s. from the sale of numberless bunches of lilies-of-the-valley from her garden”. Schoolchildren raised £3.11.6d. in a competition for a lemon and collections from the audiences of the two cinemas amounted to £130. On Monday, 17th April 1944 Miss Evelyn Busby was appointed first lady Chairman of Harpenden Urban District Council and in August 1943 it noted that “articles of feminine allure such as lipstick” were being supplied to the A.T.S. girls!

After sending a copy of “Echoes” to all the “Boys and Girls” together with a 10s postal order, the Comforts Fund was left rather depleted and so a Week of Entertainments was arranged from 7th-13th August 1944, including a funfair, Gymnkhana, boxing, vegetable and craft show, an auction, grand ball, bridge and whist drives, a brains trust, bowls, golf and cricket matches. A target of £1,000 was set and to guarantee that amount 100 people were asked to pledge £10 each – however, this would not be called in if all the events were well supported and blessed with fine weather! In fact a total of £2,122.13s was raised.

The first self-erecting canvas swimming pool was invented by Mr. McCulloch of Manland Avenue and many of these were used as emergency water tanks. 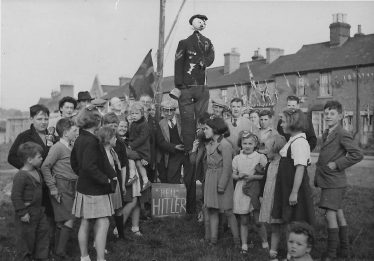 Harpenden’s last alert came on 29th March 1945 at 8.45am. and the last all-clear sounded seven minutes later. When the end of the war was declared on 8th May 1945 schools closed and church bells rang. A service was held in the Parish Church and those who could not get in listened to the broadcast by the King and Mr. Churchill through loudspeakers set up outside. Bonfires were lit all around Harpenden and many effigies of Hitler were burnt. From the Prisoner of War Camp at Batford “Very Lights” (rockets) were sent up, lighting the sky with different colours, and in just two days the Council arranged a Celebration Party in the Public Hall for the 10th May. 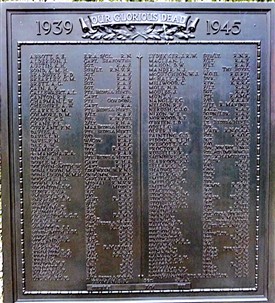 Peace was followed by the long wait for forces personnel to return home, and businesses and shops to get their staff back. The prisoners of war at Batford Camp were sent home over the next few years, but some chose to stay here. Gradually people picked up the pieces of their pre-war lives and Harpenden’s identity returned when the Harpenden sign on the common was reinstated, having been removed for the duration of the war. Those who fell are commemorated on the War Memorial on Church Green, where the recast plaques were unveiled on 6th November 1949.