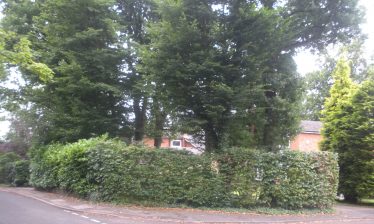 Fred and Doll Wright lived at ‘Woodlands’, a large house in its own grounds at the corner of Roundwood Lane and Wood End Road, with an attached flat and outbuildings. Ever hospitable and generous, the Wrights held open house for any passing service personnel, people temporarily without a roof, and suchlike. Having ample accommodation to spare they usually had a house full of billeted young service people – plus two lovely grown up daughters for whom I, a six-year-old, fell in turn. Their summerhouse – a tennis pavilion – served as the ‘W2’ Wardens Post, to which my father was attached, so that in more than one way ‘Woodlands’ and the Wrights tended to be the centre of much activity, both social and otherwise. 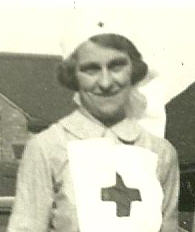 At Christmas time they would hold a charity concert in aid of the Red Cross. Anyone who could play a musical instrument would be invited to take part. There would be a medley of ukuleles, guitars, Tipperary flutes, and percussion of various kinds. I was permitted to contribute on the mouth organ, and performed a repertoire of patriotic melodies. There’ll Always Be an England never failed to win applause. Run Rabbit Run gave rise to much sucking in as well as blowing out. Here’s a Health Unto His Majesty would cause some astonishment, though in fact it was a bit of a doddle since you could play most of it on three notes.  Being six years old at the time, and looking quite a bit younger, I would receive approbation far greater than I deserved. Uncle Fred would invite me to join in a grand finale with all the others. I would protest that my mouth organ was in C Major and the rest of the instruments in G, but he would have none of such niceties. With luck I would be drowned out by the rest of the ensemble.

Pop songs of the day included ‘Johnny Pedlar’, ‘Down Mexico Way’, and ‘Hey little Hen, When When When, will you Lay me an Egg for my Tea’.

The Wright family possessed the most splendid air raid shelter I had ever seen. Most of these buildings were drab and utilitarian, often with no light and usually with no decoration and lots of concrete and sandbags. You decamped there in a hurry when you had to, with hot water bottles, camp beds and torches, waiting patiently for the ‘all clear’. The ‘Woodlands’ air raid shelter, however, was of a different order.  There were seats around a central table, bunk beds, and a series of mock window panes.  Each one had a painted beach or country scene and miniature curtains, giving the illusion that you were on holiday

A close has replaced the extensive grounds of Woodlands in Roundwood Lane. Credit: Rosemary Ross, August 2012

‘Woodlands’ was demolished not long after the war, and there is now a cul-de-sac named after it. One of the new houses, built over a water feature of the estate, was originally named ‘Wright’s Folly’ and one likes to think that it was aptly called. Fred Wright, who had a keen sense of humour, would surely have been delighted to have known he had given his name to a Folly. 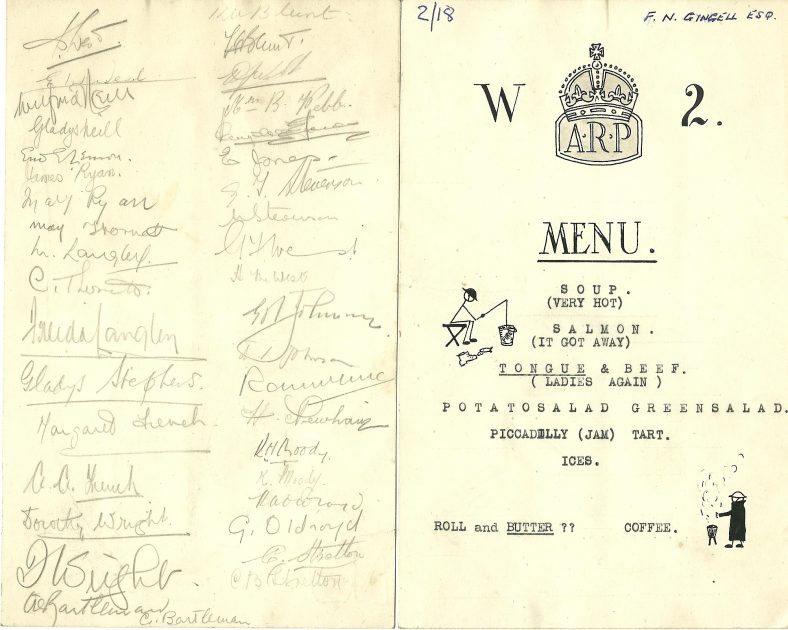 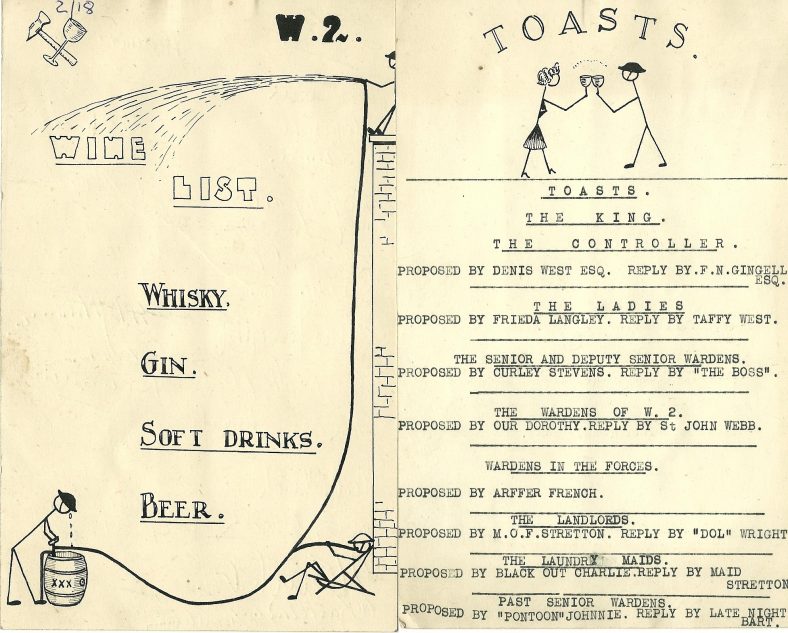 The toasts – ‘Dol’ Wright replied for the landlords of the W2 Air Raid post. Credit: LHS archives – LHS B2.18