The talk treated those present to a gripping account of the intriguing mystery surrounding the disappearance of Glenn Miller. 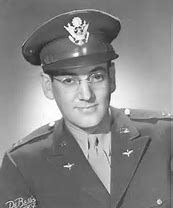 The world-famous band leader joined the US Army in 1942 and two years later brought his Army Air Force Band to England.  His commanding officer here was the actor and film star David Niven and the two became good friends.  Glenn Miller’s music became a great morale booster in the UK, for Allied troops throughout the European Theatre of Operations (ETO) and, through its radio broadcasts, to those longing for freedom in the enemy-occupied territories.  Major Miller also made propaganda broadcasts direct to the German people, urging an early end to the War.

November 1944 saw both Miller and Niven visit General Eisenhower’s headquarters in Versailles where the transfer of the band to France was arranged for the following month.  According to the official account, Glenn Miller took off with two other people in a single-engined Norseman aircraft from RAF Twinwood in Bedfordshire on 15 December 1944. He was never seen again. The popular 1953 film, The Glenn Miller Story, supported this version of events.

However, subsequent research has found many inconsistencies.  Miller hated flying and is highly unlikely to have travelled in a small plane such as the Norseman.  His previous trip to France was on the regular military shuttle flight from the American’s VIP transport base at Bovingdon in Hertfordshire and he would have been much more likely to have used that.   In addition, the Official Records show that RAF Twinwood was not operational on December 15th 1944.   There are also many conflicting eyewitness reports, including sightings of Glenn Miller in Paris the day before the Norseman vanished and another, quite remarkably, from a US veteran claiming to have seen Glenn Miller in a military hospital in Ohio with a serious head injury. 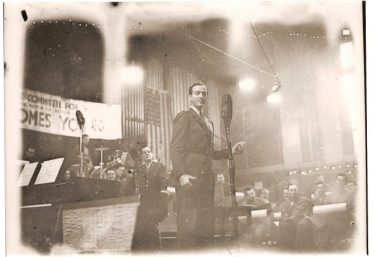 David Niven (at microphone) and Glenn Miller photographed during a performance by the Glenn Miller Band at the Bedford Corn Exchange, July 1944

Trying to make sense of these discrepancies, researchers have attempted to chart documentary evidence of what took place.  However, key files appear to have been deliberately withheld by the military.  German documents suggest that the Gestapo knew of Glenn Miller’s presence in Paris and that he may have been involved in a clandestine intelligence mission, the failure of which has been covered up to protect the high-level reputations of those involved in its planning.

So, 70 years on, questions still remain.  Was Glenn Miller killed when his plane crashed into the English Channel?  Did he come to grief in Paris?  Did he die in the United States?  All matters of long-running conjecture.  But most intriguing of all perhaps is the question of why the authorities appear to have been so reluctant to open their files on his mysterious disappearance.

What really did happen? Tony Eaton, a long-standing member of the Glenn Miller Society, gave us a fascinating insight.