A child's memories of WWII 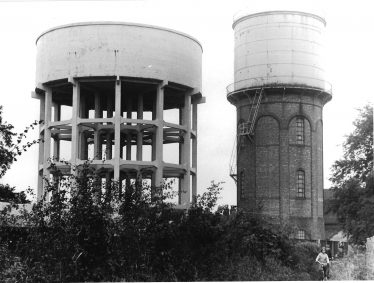 I was born in January 1937 and was therefore between the ages of three and eight during the conflict. During that time my family lived at 37 Station Road, between Overstone Road and Granary Lane. My memories are rather disorganised.

I remember looking out of my bedroom window, which faced south, and seeing the glow of London burning. I was always conscious of the siren on top of the metal water tower [beside Granary Lane] sounding the air-raid warning and the all-clear.

My father was feathered

My father was a Warden and I remember him coming home one night covered in goose feathers. An incendiary bomb had dropped through the roof of a house in Cornwall Road and blown apart feather-filled bedding. He got wet and the feathers stuck to him – a memorable sight!

Talking of bombs, I remember Batford Methodist Church had a direct hit, as did two houses, one in Crabtree Lane and one in Southdown Road. You used to be able to pick them out if you looked carefully at the roofs. Bombs also landed across parts of the common and at Westfield Road.

Several houses had blast-walls built, often to protect their doors, and many people put sticky tape over their windows to avoid flying shards of glass.

Another clear picture is of a Messerschmitt 110C plane with smoke coming from one of its engines crossing the north-eastern sky one afternoon. It crashed at Barley Beans Farm, Kimpton, killing the pilot, Georg Anthony, who is buried in Hitchin Cemetery. The other crew member was severely injured; I saw him parchuting from the plane. He injured his back on landing. The site was excavated in 1982 and remains of the plane were found. The incident occurred on Friday, 30 August 1940. Although I saw this from our front door, I am indebted to The Blitz Then and Now, Volume 1, published by After the Battle, for the other information.