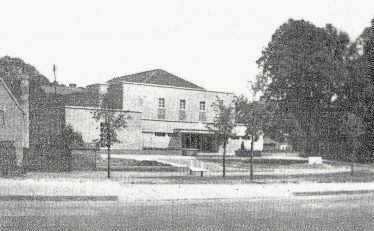 zoom
Detail from newspaper cutting, advertising the opening of Harpenden Public Halls in 1938. Celebrations included a Gala Dance on the Saturday night. Dancing on Saturdays became a fixture for many years.
LHS archives

When war broke out in 1939 Harpenden was growing fast with plenty of available land of which builders took advantage. So there were many empty houses and this was where the troops were billeted.

The first regiment was the Tank Corps (I believe they are now the Royal Tank Regiment).  They arrived sometime before Christmas 1939 and stayed for 3 months.  The group that I knew were billeted in a lovely house in Grange Court Road, and their tanks were parked nearby – huge, extremely noisy things – probably relics of the first World War!

The next regiment to come to Harpenden that I recall was the Royal Ulster Rifles (RU.R’s).  I assume they would have taken over the same houses as the Tank Corps, and they stayed for 3 months, I think.  Like the Tank corps they were regular soldiers but were not all Ulstermen – a good proportion came from Eire.

Sometime later the Hants & Dorsets (I think that is correct) came, but I cannot remember anything else about them, but I do know that a group of Royal Corps of Signals were stationed at Rothamsted or Childwickbury (I think the former) for a large part of the war.

I was a teenager at this time, and very fond of dancing, and the presence of all these young men made a lot of difference to the Saturday night dances in the Public Hall.  I seem to remember towards the end of the war we had the Highland Division for a while, and I recall a very “lively” New Year’s Eve dance (1943/4) with them and a contingent of American Army Air Force personnel, who had driven in from their base in Bovingdon.  The HD had been in action, and were not too pleased to see the Yanks, so things got somewhat tense as the evening progressed.  As midnight approached a good number of us local girls deemed it wise to leave before things became too “lively”.  I think the Red Caps were called before blood was actually shed.