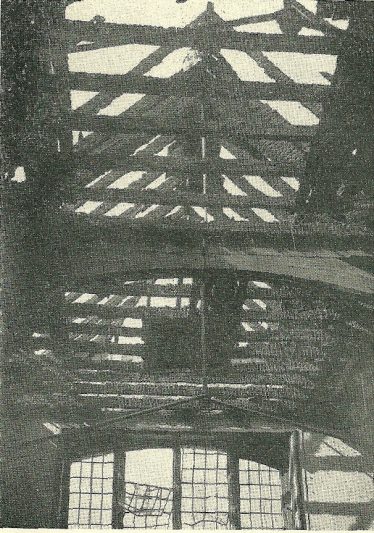 I had been taken to the Methodist service the evening before the Jerry incendiaries dropped on Batford.

The air raid sirens suggested the blitzing of London again, but when the impact sound of bombs very close got me out of bed, it became clear we were a target. From our kitchen window Mum and I watched the fire in the Chapel roof, two doors away.

Mum bucketted one of ‘our’ incendiaries, another knocked some guttering off – but basically we were unscathed. My father, working nights as the railway signalman at Chiltern Green near Vauxhall Motors, was also vulnerable to air attacks. As he cycled home at 6am he spoke to Tom Bigg, a  pillar of Batford Methodist Chapel, who told Dad: ‘You will find  a few changes when you get home’ – but gave no details.

Later Tom retorted that ‘never is a long time’ when someone suggested that the Church would never be replaced.

As the photos show, not all of the roof was destroyed but though the damage was considerable, worship continued.  At some stage a corrugated iron roof was provided, then after the war the permanent covering – but without the lantern-type vent which had held the fire bombs.

Miss Kathleen Frost organised the task of beating, cleaning, washing and mangling the blue pew runners.  Many were singed or holed by cinders.

On the Monday following the fire, Valerie and her parents, the Brills, became lodgers in a house three doors away on the other side of the chapel, and were very surprised at the damage since their initial visit.

My wife Valerie just recalls the cheesecake bought for her at the café nearby (backing onto the river Lea) but it was school as usual for me. I was nearly seven years old.