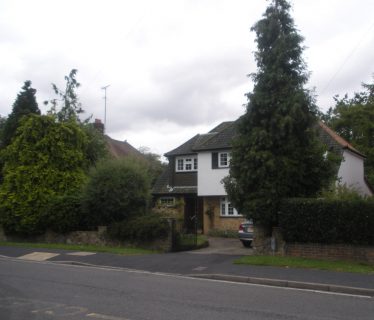 zoom
The victory bonfire was built in the road outside 10 Roundwood Park
Rosemary Ross, August 2012

Harpenden began to anticipate VE Day on the Monday, when the end of the war had been announced. The Old Bell stayed open very late that evening. My father had been a ‘regular’ all through the war, and I sometimes used to accompany him down the alley way when he went for a drink. That night  I got as near as I ever had to being allowed into the doorway of the Saloon Bar – hallowed ground.

On the morning of Tuesday 8 May my mother told me about the Armistice of 1918, when everyone lit fires and danced in the streets. She suggested I visit a neighbour, ‘Uncle’ Douglas Waite at Ballantrae, Number 14, and ask if we might get something similar under way. I did and he readily agreed. He would certainly support it himself, and he told me to visit the other houses round about and see who was interested. I called upon everyone between the railway line and the alley-way, carefully omitting one tragic family whose son and daughter had been killed on active service.  Then with the inconsequence of youth – and imagining bonfires to be simple matters – I went off for a long cycle ride by myself.

Returning several hours later I was astonished to find the road outside Number Ten transformed. All afternoon neighbours had been turning out brushwood, bracken, garden refuse and other material, and right in front of our house was the largest, tallest bonfire I had ever seen. Hastily we managed some sort of contribution from our own back garden, and my mother produced an effigy of the Führer. With some difficulty it was hoisted to the top. By this time it was about seven o’clock and I was sent upstairs to wash, change and prepare for the ceremony.

Hardly had I finished when there was a commotion at the front door. All the neighbours had assembled including those who had done most of the work, many of whom had very young children who wanted to see some of the fun before bedtime. Uncle Douglas Waite, however, was standing guard over the bonfire like Rob Roy with a garden fork, forbidding anyone to light the fire other than the young fellow who had started it all off in the morning. Somewhat abashed, and to neighbourly cheers which masked more than a degree of exasperation, I rushed down the garden, took a lighted taper, and the bonfire commenced. Hands were joined. There was a lot of shouting, and singing of patriotic songs together with a few acceptably rude ones about Adolf Hitler, the Siegfried Line and so on.

In no time at all the fire was burning brightly. Flames were shooting as high as the roof tops. The Führer was rapidly consumed, and the general commotion was sufficient to attract onlookers from Park Rise, Park Mount, Park Hill and ‘over the bridge’ in Moreton End Lane. Traffic was soon at a standstill, which was not hard to achieve since we still had a gravel surface with potholes in those days. No one drove at more than ten miles an hour, and anyway petrol was rationed.

As the evening progressed, a doctor who lived at Number Two arrived with home-made punch. This was consumed with vigour as it was getting chilly, though one or two less charitable neighbours later suggested that he had cleared out his medicine cupboard.

At Number Eleven lived Mr & Mrs Wyvil Baldwin and their two young daughters. Wyvil was a Special Commissioner of Income Tax. He used to hear tax appeals on circuit and, being tall and distinguished looking, would sometimes affect the manner of a high court judge to amuse us. On this occasion he was a Buckingham Palace courtier. Advancing with dignity he bowed and informed the bonfire party in formal terms that their family cat ‘Pussy’ was expecting a Happy Event and that further bulletins were to be expected. Loud and prolonged cheers followed.  Later in the evening he was able to announce one Happy Event, later to be followed by five more, each greeted with laughter and louder applause.

At midnight, when everyone was getting very tired and quite cold, and the embers were beginning to dim, Mrs Carol West – who lived beyond the alley – arrived unexpectedly with the large khaki WVS Mobile Canteen Van, for which she was responsible. Everyone was offered hot coffee, tea and soup.

Five months later, VJ Day was upon us. I took little part in this one. The neighbours sensibly took care to site it down the road, well away from Uncle Waite and myself. Fifty years later I recounted all this to some of the latter day inhabitants of Roundwood, who nobly responded with champagne on ice.