You are here: HomenextLocal History ResourcesnextPublications of local interestnextLife on the Home Front one hundred years ago

Life on the Home Front one hundred years ago 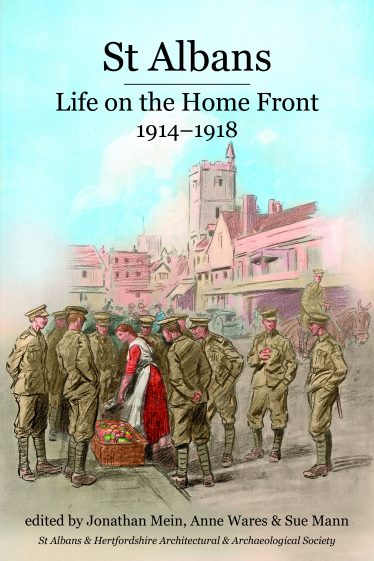 A new book just published throws light on what life was like in St Albans during the First World War. St Albans: Life on the Home Front, 1914-1918 is based on over three years research by members of the St Albans & Hertfordshire Architectural & Archaeological Society and is published by University of Hertfordshire Press. The book costs £18.99 and is available from Waterstones, St Albans Cathedral Bookshop, Amazon, Google Books and the publishers.

More about the book
St Albans: Life on the Home Front, 1914-1918 is believed to be the first to cover in depth the First World War period in the city from the point of view of those who fought the war on the home front. It reveals how St Albans became a garrison town for the first time in centuries in August 1914, forcing local people to quickly adjust to troops being billeted in their homes, schools and church halls as some 7,000 troops flooded into the city as part of military plans to protect the country from invasion and an attack on London.

St Albans: Life on the Home Front, 1914-1918 provides insights into the day-to-day struggles caused by wartime legislation, food and fuel shortages, the introduction of rationing, the entirely new threat of air raids and the need to support the fighting men and the wounded. It also provides a detailed study of the tribunal system, established in 1916 following the introduction of conscription. This enabled the researchers to piece together the stories of hundreds of local men whose applications were heard by the St Albans Military Service Tribunal.

Finally, the book examines the issue of commemoration, which began with the erection of street shrines in 1916 and led to over 40 First World War memorials being placed in and around the city following the end of the conflict.

St Albans: Life on the Home Front, 1914-1918 has been researched and written by 21 local people, including three professional historians, who are all members of the St Albans & Hertfordshire Architectural & Archaeological Society. The editors, all members of the team, are Jonathan Mein, Anne Wares and Sue Mann.

For further information about the book please contact Sue Mann, at www.stalbanshistory.org