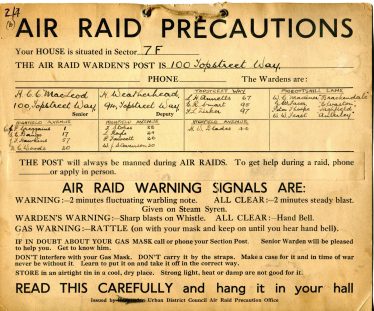 These resources, for upper KS2 and KS3, focus on how the war affected life within Harpenden.  As in other towns in Britain, the ever present threat of aerial bombardment meant that a local ‘army’ of volunteers needed to organise themselves to prepare for this eventuality.  The town was divided into sectors with a senior warden in charge of ensuring the sector was equipped to deal with fires resulting from bombings.  Stirrup pumps were purchased, details of every house recorded, and groups of fire watchers were on duty through the night.  Bomb shelters were put up in many gardens, and three public shelters were built in the centre of town.  First Aid posts were established throughout the town, whilst local volunteers like Ethel Howard undertook first aid training and learned to drive ambulances.  In the end, Harpenden escaped relatively lightly: although over 2,000 bombs were dropped (mostly incendiary rather than high explosive) and 180 houses were damaged, only one private house (10 Crabtree Lane) and two other buildings (Batford Methodist Church and Badminton Hall) were significantly damaged.  However, the threat of bombing was still a daily fear and throughout the war 941 alerts were given.

In addition to voluntary duties to deal with bombing raids, Harpenden residents had to contend with the introduction of rationing for food, clothing and other essential items.  As many items could only be purchased with coupons even the wealthier residents had to learn to ‘mend and make do’.  New allotments were created and gardens given over to the cultivation of fruit and vegetables to supplement the rations.  The land army even planted wheat on Harpenden common.  Perhaps most significantly of all, many Harpenden residents took into their homes one or more of the estimated 2,500 children who had been evacuated to Harpenden during the war.  There is a detailed section on this in another part of the website, which includes the memories of evacuees themselves.  These reminiscences in particular could be used to great effect within the classroom:  http://www.harpenden-history.org.uk/category_id__93.aspx

The resources below are for one lesson.  In the teachers’ resources section, you will find a full lesson plan, the worksheet needed and a list of all the documents.  The following pdfs contain images of the original documents needed for this lesson.