You are here: HomenextUncategorizednextDavid and Janet Keen 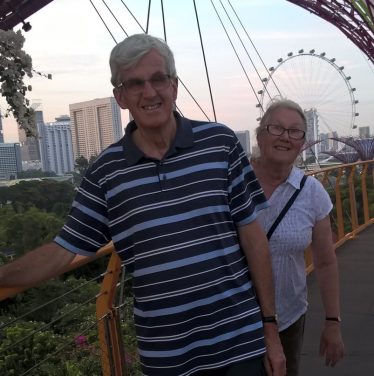 The Society welcomes David and Janet Keen who both joined the Committee in 2018, David as our Curator. Janet took on the role of Programme Secretary in 2019.

David was born in the Red House and grew up in Harpenden, attending Manland Primary School and Hemel Hempstead Grammar School. He worked as a teacher in Buckinghamshire, where he met Janet and they were married at St. Nicholas’s Church in 1971. They have two grown-up daughters and returned to live in Harpenden in 1982.

David retired from teaching to work at the Royal Air Force Museum, Hendon. For most of the last twenty years he led the Access and Learning Team, being responsible for educational programmes for visitors ranging from pre-school children to senior citizens and including serving members of the RAF. He interpreted his role widely, so it included media interviews and escorting VIPs round the Museum. David regarded this as a dream job as he never expected that anyone would pay him to talk about Spitfires, but they did!

Janet left full-time teaching to bring up her children. She worked for many years at the much-missed Paton Books shop on Holywell Hill, St. Albans. Her expertise and organisational skills have already been useful and will be invaluable as the H&DLHS Collection develops.