You are here: HomenextHarpenden HistorynextPeoplenextNotable or notorious folk OR Colourful charactersnextMy Dream Job at the BBC Natural History Unit

My Dream Job at the BBC Natural History Unit

Summary of a talk given by Mike Salisbury OBE at the Society's meeting held on 22nd May 2017. 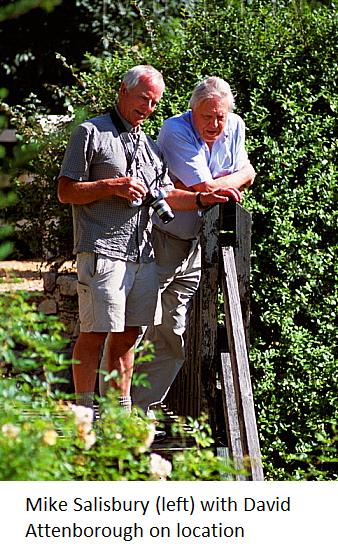 This report first appeared in Newsletter 133 in December 2017

Mike Salisbury, great nephew of the famous Harpenden artist Frank Salisbury, came back to Harpenden with his family from Derry in 1946 aged four. His father, Freddy Salisbury, had been based there in the Navy and on return went back to run Kingston House, the ironmongers firm which had been started by Mike’s grandfather Edgar, as Salisbury and Sons and was based in a small shop behind the current ‘Inn On The Green’.

His mother was keen on Botany and insects and encouraged him to enjoy outdoor life. He attended the Montessori School at St. George’s where he was a member of the Caterpillar Cricket Club. Harpenden ‘village’, was very ‘quaint’ when he was growing up. He loved to watch the smithy shoeing horses.

Mike was educated at St George’s School, Harpenden from 1952 to 1961.
“It was really a Comprehensive School before its time,” he said. “Educational results were important but not to the exclusion of all else.” He sang in the choir; music was very important to him. He was keen on drama and aged 10 took a role in a specially written play ‘A Mouse, a Bird and a Sausage’. Mike was the bird for which his mother made his costume. “No mask,” he said,” I want people to see my face.” Peter Bawden wasn’t so lucky; he ended up swathed from head to foot in pink muslin!

Mike was a keen member of the school photographic club and did his own developing and printing – including photos of the sports teams, which brought in a small income. He learned a lot about photography which would serve him in good stead, in his future career, as would the subjects of English and Biology, which he chose for A levels. To his disappointment, these did not secure entry to university. So he tried an apprenticeship but gave it up, and went with Voluntary Service Overseas to Usuthu Mission in Swaziland, where he maintained the Land Rovers and other vehicles. In the school there, Mike encouraged drama among the students, and produced a condensed version of Macbeth, which was later adapted as Zulu Macbeth and came to London to much acclaim.

After this, he took a job at the family firm Kingston House Mowers where he worked as Service Manager. During this period Mike was a very active member of the Harpenden Drama League and also enjoyed singing with the Lea Singers. He said that drama and music play quite a part in natural history programmes. Choosing the right music to enhance a scene is important. His drama skills were also needed later, when he made ‘The Discovery of Animal Behaviour’ and was called on to direct professional actors. Kingston House made him a company director, but profit and loss accounts bored him so he left to follow his dream of becoming a film maker.

In his youth he’d been an avid watcher of “Zoo Quest” on TV with David Attenborough and had always wanted to make similar documentaries. He kept applying for jobs at the BBC until one day the phone went and he was offered a three months’ contract as a researcher on ‘Parkinson’, interviewing guests before the show. He hesitated for a moment, then jumped at the chance to get a foot in the door. Among others, Mike interviewed Muhammad Ali, the Beatles (except Paul McCartney) and Charlton Heston.

He did some time as a researcher on ‘Horizon’ – a science documentary programme – but really wanted to work in the Natural History unit at Bristol.

The ‘dream job’ – with David Attenborough

Just before David Attenborough’s ‘Life on Earth’ he landed the job of his dreams as an assistant producer on the project. He said: “It was wonderful, working on that – out with the camera men, learning field craft, using practical skills I already had.”

Mike spoke about the many programmes he had made including five ‘Life’ series with David Attenborough. He described how he had to find locations where rare species could be filmed: the kiwi, for instance, which only comes out of hiding at night.

He talked about the development of time lapse photography. For ‘The Private Life of Plants’, he worked closely with the scientists who created special environments to cultivate plants where growth could be recorded without interference. Cameras were practically built into the environment to get maximum impact.

Mike became good friends with David Attenborough. “A very patient, kind, and funny man, and an inspirational communicator,” he said. “It was a lot of fun working with him.” To make the point, Mike showed a video of a lyre bird running in front of David, who was crouched behind a wispy bush, waiting to deliver his lines.

But the bird wouldn’t wait long enough for him to speak. At least a dozen times, the bird ran across the screen, David standing still as a statue, always in the same posture, until at last it paused and the patient communicator was able to finish the scene.

Mike said that a TV series of that quality that would cost £6 – £8 million to produce. One third would come from licence payers, one third from BBC World (the commercial arm of the BBC) and one third from other investors, usually USA. Once the films are made they are sold all round the globe, and make a profit, which is ploughed back into the next series.

Mike retired from the NHU in February 2006, but continues to work as an independent producer on ‘The Natural World’ and other BBC programmes. In 2007, he was made an OBE in the New Year Honours List for his services to broadcasting.