This memoir was first published on the “Old Harpenden, Years Gone By” Facebook page in January 2016, and Graham Hobbs kindly gave permission for it to be added to our website.

Whilst I was visiting the German Hospital on the island of Jersey I suddenly realised that the German Prisoners of War housed in the Batford Camp were captured from this island.

My parents moved to Harpenden between 1943-44. We moved from Kilburn in North London to escape the bombing. My father was not a very fit person as his heart had been damaged by Rheumatic Fever as a child. He took a job as a milk roundsman with Harpenden Dairies, then owned by Councillor Mr Gingell. We lived in a tied, downstairs flat at 21 Vaughan Road. The stables belonging to the Dairy were behind our flat. My father’s round started in Milton Road and ended in Crabtree Lane.

I recall that on Sunday afternoon many prisoners from the camp attended the Salvation Army Hall in Amenbury Lane. I understand that they enjoyed a period of community singing in their native tongue. Following this, members of the Corps used to take prisoners into their own homes for tea before they returned to the Camp. 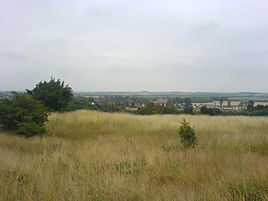 We retained contact with Gerth Trolle after his return home to Germany. Christmas always meant an exchange of greetings. He returned to live in the small village of Niemberg not far from Halle. This was in the part of Germany which was under the control of Russia post-war.

My father decided to change his occupation and return to butchering. This meant that we had to apply to Harpenden Council for housing. We were allocated a dwelling in the Batford Prisoner of War camp. We moved into a hut that had been used as a shower hut for the prisoners. The hut had a hollow single wall of bricks. We could see where the drainage gulley had run down the middle of the hut and had been concreted over to give us a level floor.  Our cooking was achieved on a Baby Belling electric stove. Our toilet was an Elsan chemical one, which my father had to empty periodically in a pit that was dug in the back field. I think that the warden of the camp was Mr Lowry. I attended Manland Junior School until the Batford Primary School was built. I was in Mr Tait’s class.

In 1992, once Germany had been reunited I decided to fly to Hanover, hire a car and go and find Gerth Trolle. East Germany proved to be very different to the West. We found Gerth living in a small village with its cobbled streets. Gerth lived with his only daughter Heidi and her husband Günter and his grandson Jens. They still had a well in their backyard and a privy. The house had only received a water supply in 1990.

Gerth had forgotten most of his English, but with the help of Jens who was learning English at school, he found it difficult to believe that we lived in the Camp for almost 3 years while we waited for our council house at 44 Porters Hill, Batford. 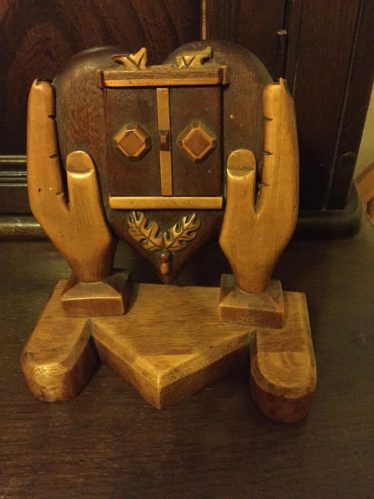 Photo-frame made by a German PoW. Credit: Dawn Bradbury

Ed: among several appreciative comments, Dawn Bradbury added this photo –  “A German prisoner who left his bicycle with us, and made this lovely photograph frame as a thank you. The little doors open to show the photo.”