A study of the houses on the Eastern side (even numbers)

For houses on the western (odds) side of Roundwood Park, see Part 2. 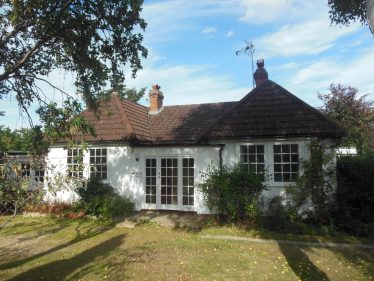 Reacting to John Wyborn’s page about Roundwood Park from the 1920s to the 1960s, Haydn Dickenson of no.54 offered information about changes in the road since the early 1960s, when his parents bought this bungalow, which retains many original features. He is probably the second longest standing Roundwood Park resident, or possibly the actual longest. His father died in 1992 at the age of 73. The house was then divided between Haydn and his mother. Mrs Dickenson senior passed away in October 2017 at the age of 90, and of course she had lived there since 1961.

Deeds for no 54 show that the bungalow was built in 1923 by Jesse Catton who sold it to Lily Parsons Whitlow. In all there were five owners before the Dickensons moved in. 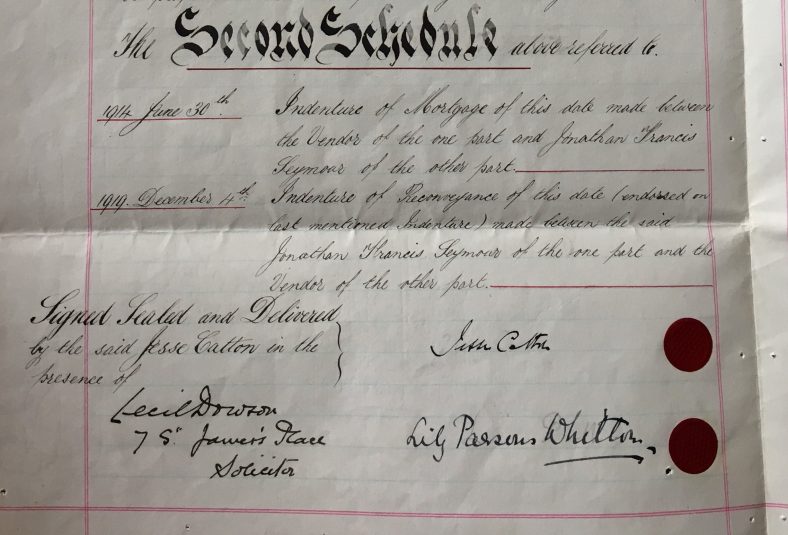 Foot of second page of deeds, indicating original purchase of the land in 1914

Haydn was born and brought up there. Here are some of his memories of the immediate neighbours:

“Mrs Joan Read at no.52 (formerly Ayot, and listed in Kelly’s as a poultry farm) was an extremely keen gardener, so whether her superb results were due to rich poultry content in the soil, or to the newspaper that she used to dig into the soil to create structure, I don’t know. Mrs Read was an extremely kindly lady with a weather-beaten face and a headscarf. She used to ride a pedal bike, and became god-mother to my sister I think. Her husband Ken collected stamps and had a beautiful Armstrong Siddeley car. He had grown up in the then Rhodesia. Mr and Mrs Johnson lived at no.50. We did not know them well.

“Mr and Mrs Humphries lived at no.48. They owned a long L-shaped plot of land that comprised their house and back garden and a strip at the bottom stretching north, running along the bottom ends of theirs, the Johnsons’, the Reads and no.54. In 1972, Mrs and Mrs Humphries instigated a deal whereby the Howfield estate came to be constructed, meaning the demolition of nos. 50 and 52, (semi-detached houses which straddled the entrance to Howfields) and the selling off of most of our beautiful long garden, and a strip at the side, so that the rebuilt 52 comes very close to the boundary of no.54. Interestingly, 48 was retained, but was demolished some 15 years or so ago – the two new replacements were built in a style similar to the original.

“The gardens were beautiful, and many homes on Roundwood Park still retain the long back gardens from when the properties were created. Ours and Mrs Read’s had wonderful orchards at the bottom – we had apples, plums, peaches, quinces and others. It was magical – in fact my father bought the house for the garden. It was never a beautiful house, and is poorly built out of strange hollow clay ‘pots’ (a kind of cavity insulation) with all the doors wonky. It had a strange wood-burning stove running up through the loft space, meaning that several of the roof joists had simply been sliced through! But the original garden was very fine. I still have the ornate pond in my garden that can be seen in some of the aerial photos.

“Another notable Roundwood Park resident in the early 1960s was John, Lord Sandford who lived at Cherry Trees (no 21). Lord Sandford was curate at St Mary’s Church, Kinsbourne Green, and he baptised me! Lady Sandford ran the local ‘Young Wives’ club, of which my mother was a member. It was said that a few non-church-going neighbours suddenly started attending when Rev. Lord Sandford came on the scene, keen to hobnob with the aristocracy!”

Haydn took me for a walk along the length of Roundwood Lane, pointing out where the original house had been a bungalow (eg no.41 was identical to no.54), which houses have been extended (with the original design still detectable) and which have been demolished and replaced, sometimes by two houses on the original plot. Many, but not all, the replacement houses have been designed to blend with character of the road. However, the spacious layout of the plots in the 1920s and 1930s has been lost through ‘infilling’ and entries to developments in former large gardens (The Spinney, Medlows, Falconer’s Field).

It is notable that the greater concentration of bungalows was at the northern end of the road which Jesse Catton developed first. This can be seen in a series of aerial photos of Roundwood Park from the northern end to the Round Wood, taken in 1951. 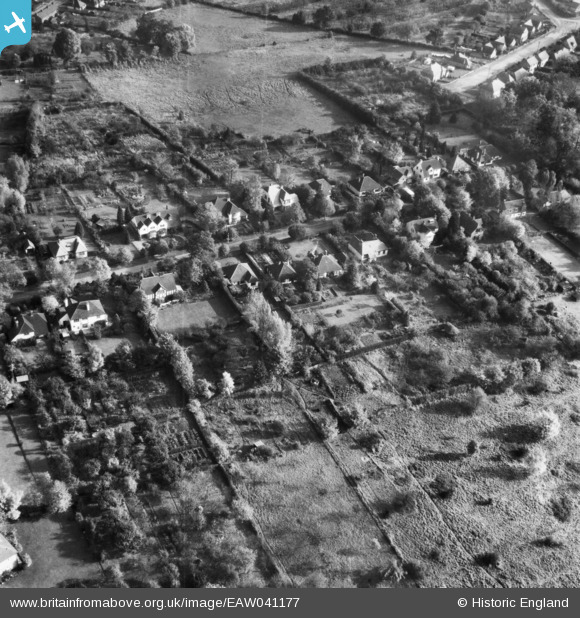 Aerial view of Roundwood Park, looking East. No.54 is on the upper left; alongside the three gables of nos. 52 and 50 – access to Howfields was through the land of no.50. 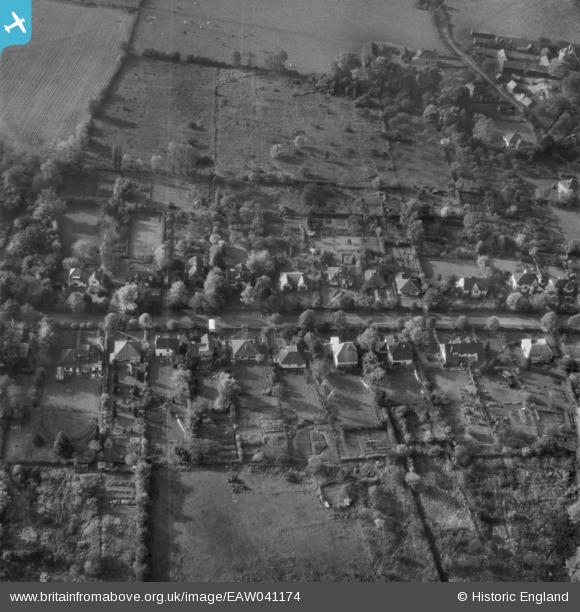 Aerial view, looking West – with no 54 at the bottom right. In the centre of the opposite side of the road was an identical bungalow – incorporated in and extended no.41 in the 1980s

The gallery below shows houses standing in the autumn of 2018, with captions annotating their approximate building history, as remembered by Haydn Dickenson. The captions include identification of the original name and approximate date of existing or demolished houses from Kelly’s Directories. It is not always easy to identify earlier house names with numbering which was introduced after the 1938 directory was published.

For numbers 2 to 20, see gallery at the foot of John Wyborn’s page.

We hope that amendments will be submitted, including the dates of rebuilding and extensions – together with information about architects and builders, where known, via enquiries@harpenden-history.org.uk 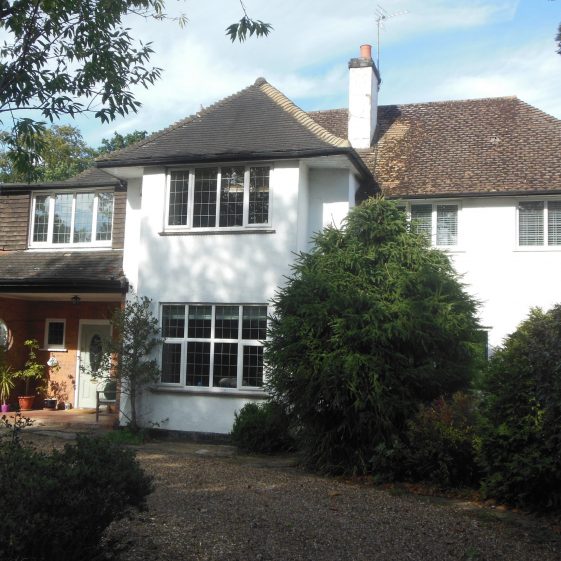 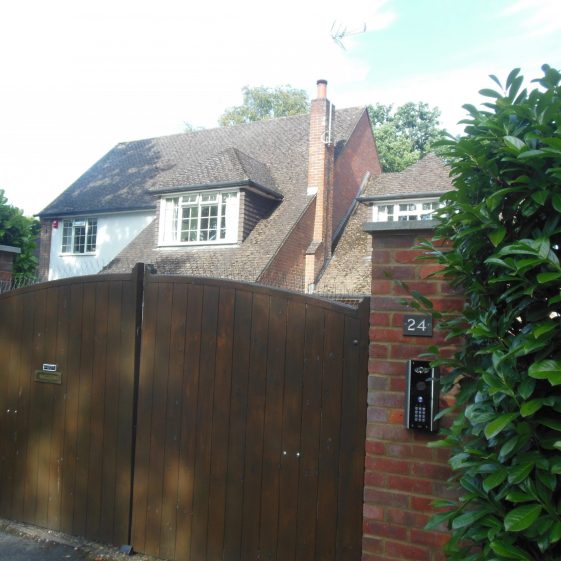 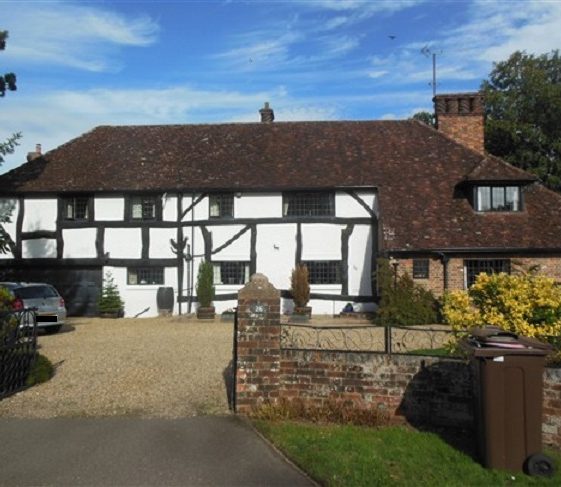 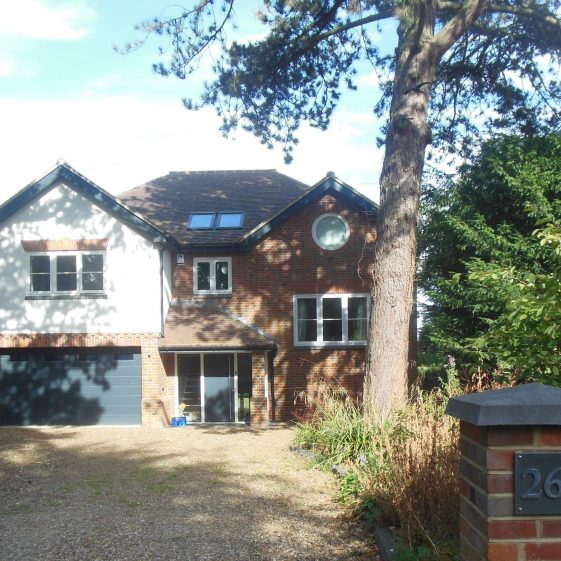 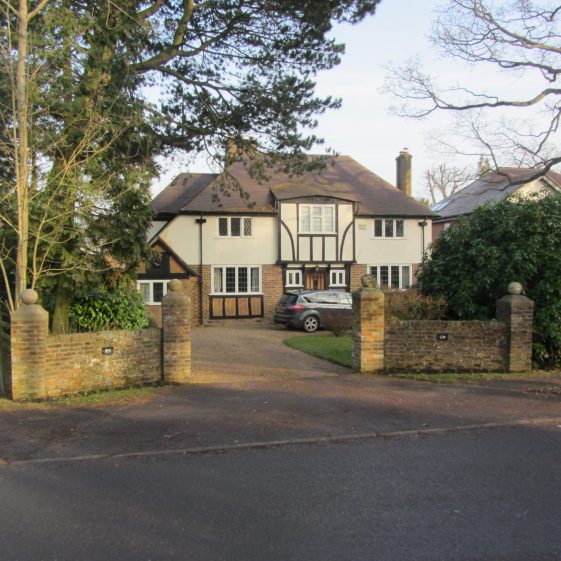 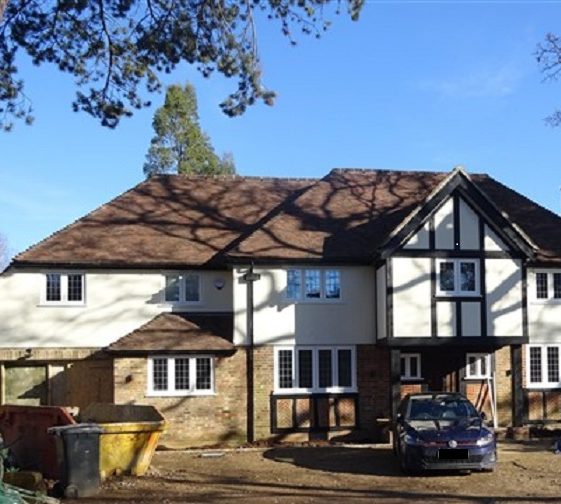 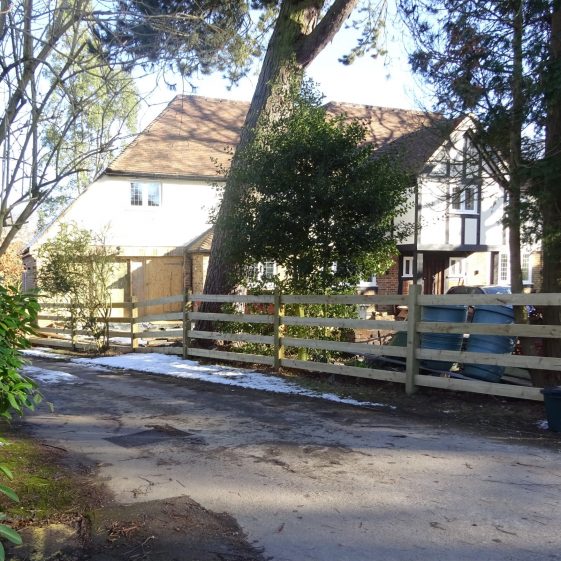 Entrance to The Spinney, alongside no.28. The Spinney was developed in the 1970s on land belonging to no.30.
R Ross, February 2019 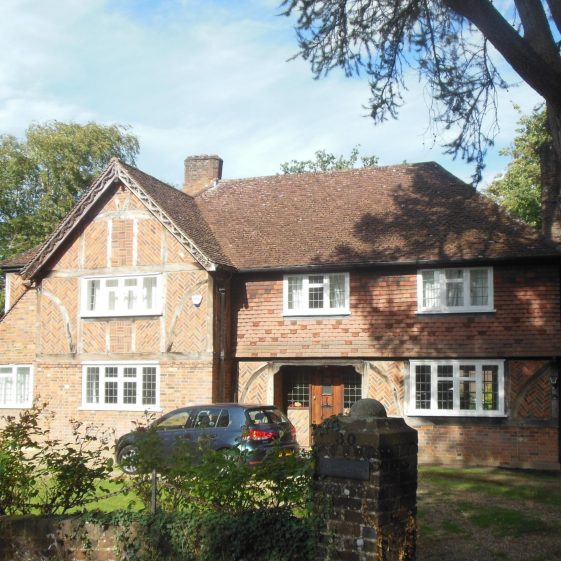 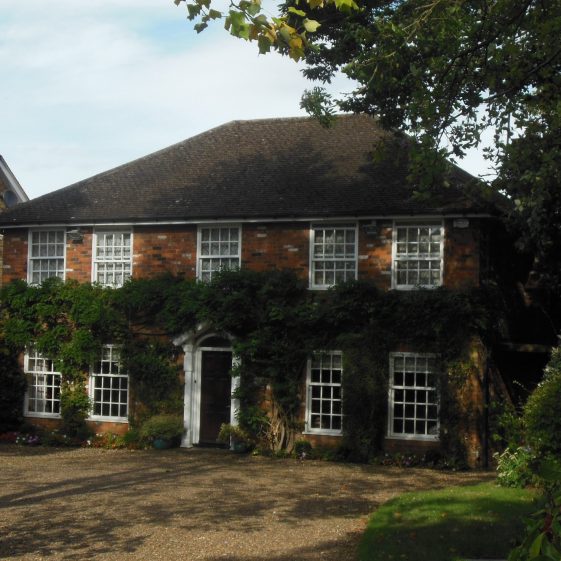 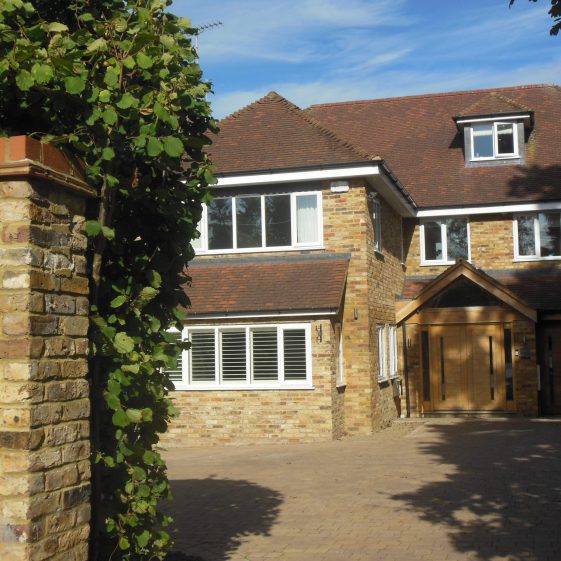 32a Roundwood Park. The plot shared with no.30 appears to be unoccupied until after 1974 - the last issue of Kellys' Directories
R Ross, September 2018 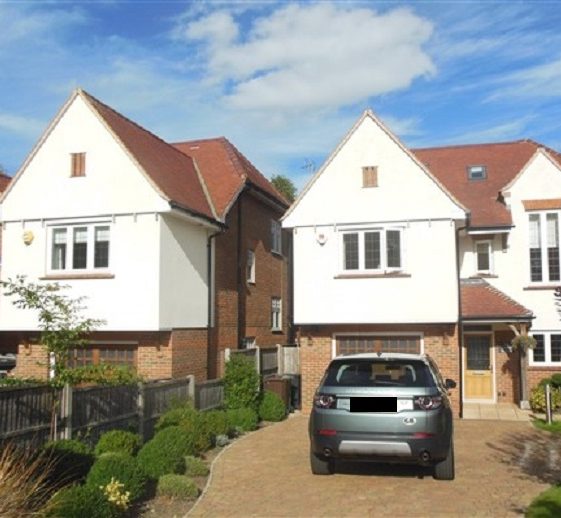 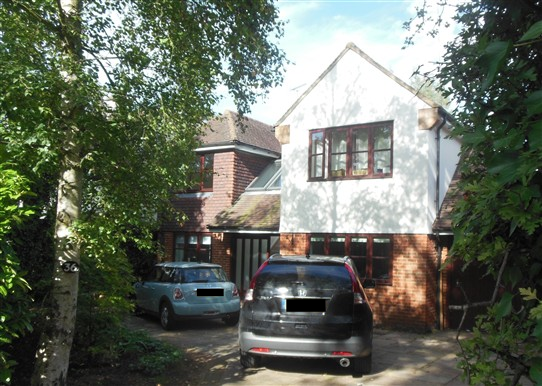 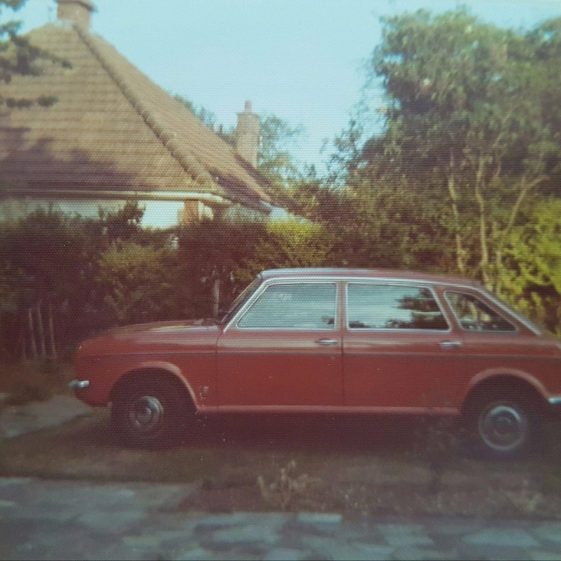 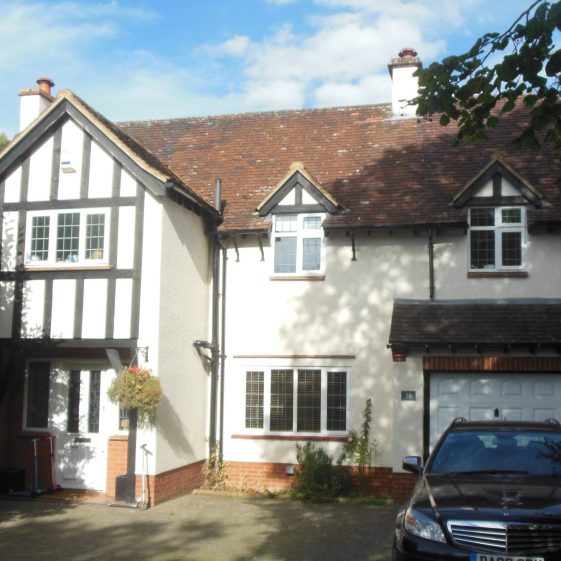 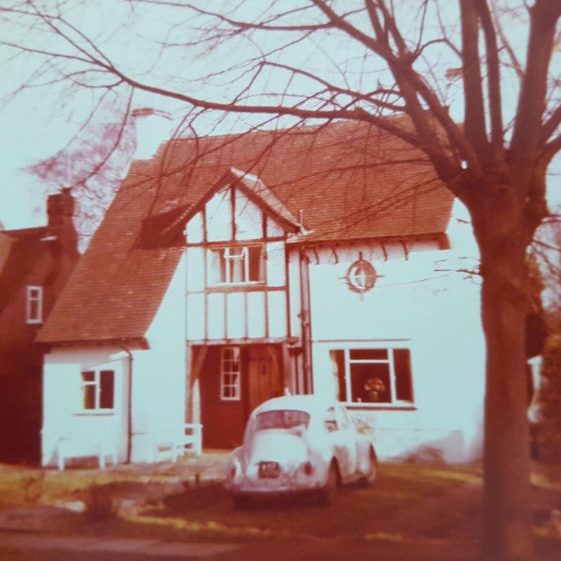 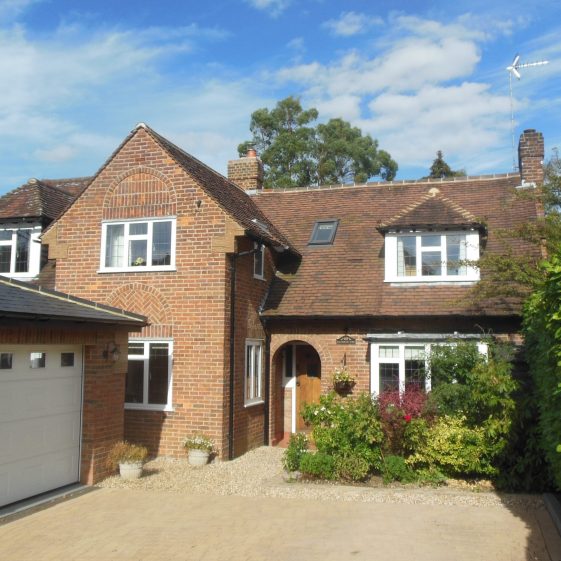 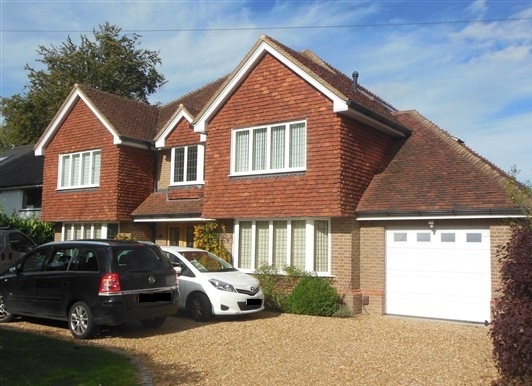 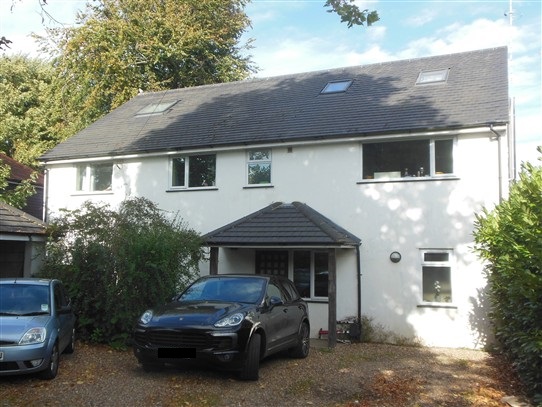 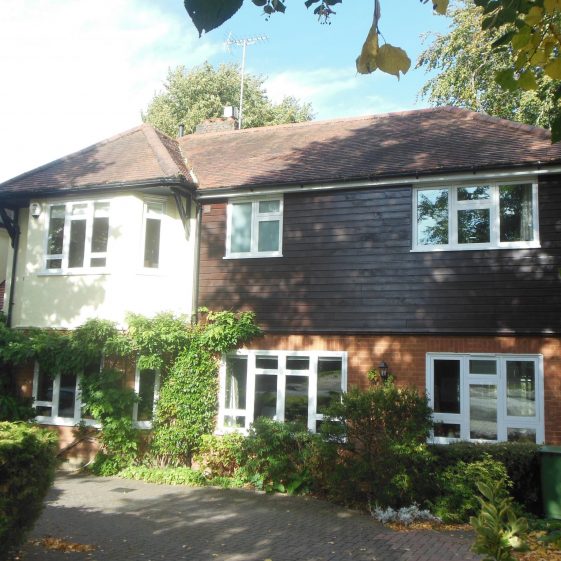 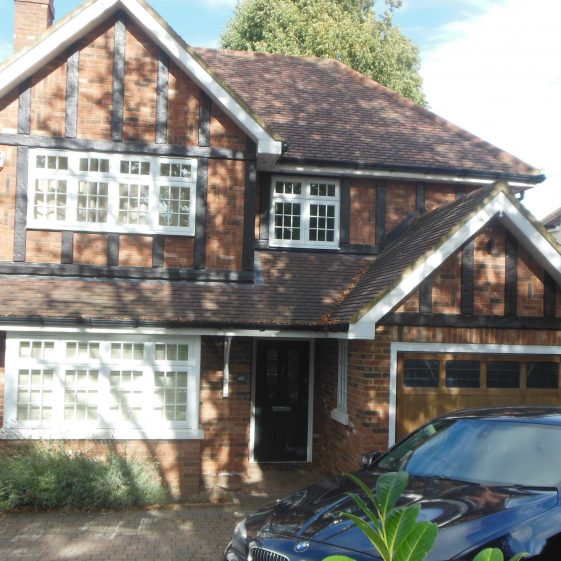 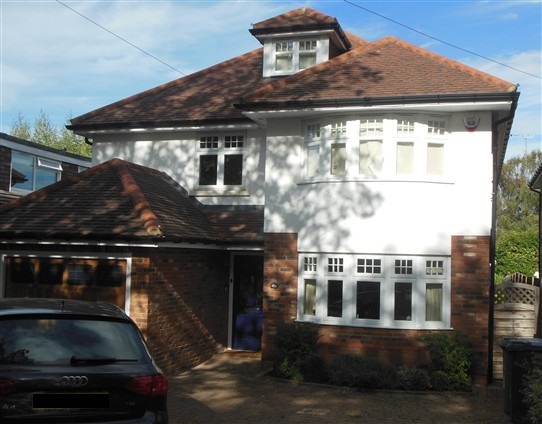 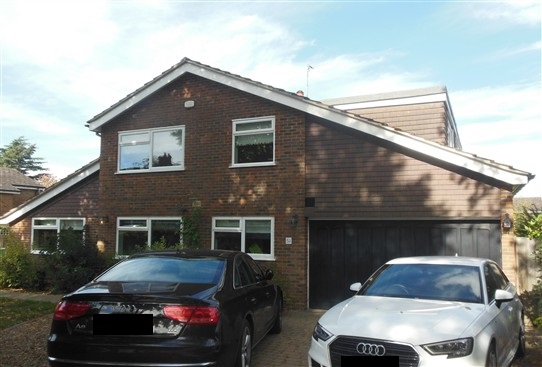 50 Roundwood Park - 1975 newbuild south of site of former 50 which had been built in 1926 as part of pair of semi-detached houses - known as 'Cranhurst'; demolished with former 52 to provide entry to Howfields
R Ross, September 2018 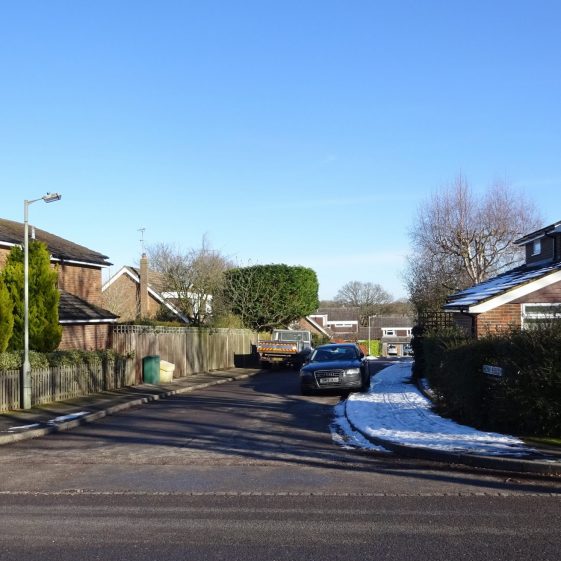 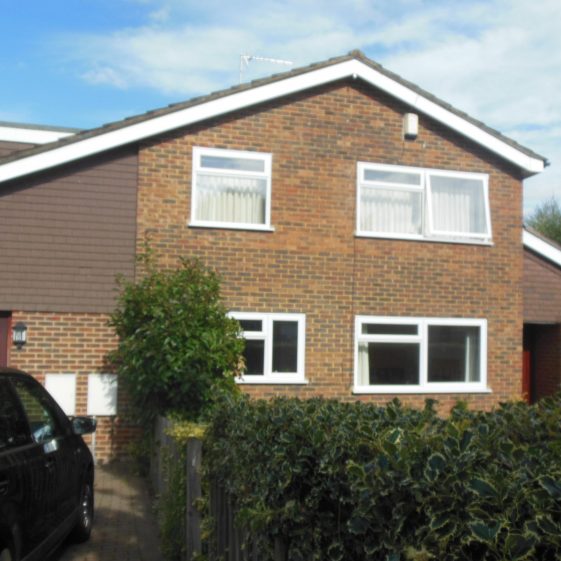 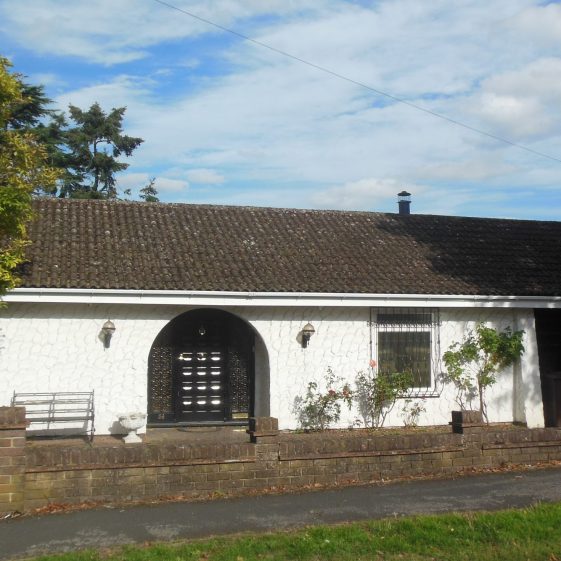 By Rosemary Ross, based on information from Haydn Dickenson