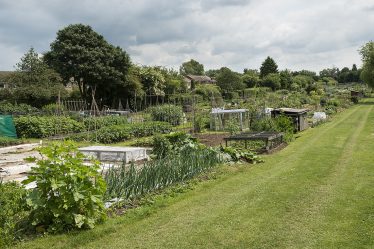 Allotments have been in fashion for many centuries although not in quite the same way as nowadays.

It all started a long time ago when villagers in the early Middle Ages were allocated (allotted) pieces of land on which to grow their crops – mainly barley and wheat. Sadly, this practice was overtaken by events with the privatisation of Common land when Land Enclosure started to happen in the 18th and 19th centuries. But, fortunately, due to the social responsibility of the clergy and some of the gentry, there was a lobbying for legislation to protect the poor and unemployed from the worst effects of the loss of land on which to grow food. Effective legislation probably did not occur until the late 19th and early 20th centuries.

Years later, it was estimated there was a peak of 1.5mn plots during WWI and 1.75mn in WWII, respectively. In the latter case, the phrase ‘Digging for Victory’ is a term with which many of us are familiar. Since those heady days the movement has seen a decline in numbers.

Following on from a series of laws aimed at improving the security of tenure for allotment holders, The Allotment Act 1950 tidied matters up, stating inter alia that local authorities had to provide allotments at a rent that was reasonable for the growing of fruit, vegetables and flowers. Today, subject to certain conditions, some allow bees, pigs and goats: others have allowed the maintenance of hens and rabbits – provided, of course, in all cases the animals are properly caged! Other rules apply to the keeping of hives of bees.

The first piece of significant legislation insofar as present-day allotments are concerned is the Smallholding and Allotment Act 1908 when County Councils were eventually forced to become proactive: in particular, Section 23 required them to provide land if there was a demand.

The Allotment Act of 1922 specified that 40 rods should be a maximum size of plot i.e. ¼ of an acre; and, the law required Allotment Committees be set up. (The 1972 Act removed this obligation.) The Allotment Act 1925 defined a statutory allotment and councils wishing to sell allotment land were obliged to seek permission from the then Secretary of State for Agriculture (now, the Secretary of State for Commmunities and Local Government). The Smallholdings Allotment Act 1926 introduced the notion of giving Notice to Quit and compensation being given to allotment holders for loss of facilities, and the Local Government Act 1929 made the land non-rateable.

An attempt was made a few years ago to codify the law even further. In 1969, The Thorpe Report recommended that each council provide a minimum of 15 full-size plots per 1,000 households. Continental gardens should be adopted and hard surfaced roads, toilets and communal buildings provided. Also, grants for pensioners were suggested. Thorpe recommended a single Act to encapsulate all the valid terms of previous Acts of Parliament.

For the record, 51 Statutory Allotment sites were closed between 1997 and 1998 – only two were relocated. It needed the consent of the Secretary of State for this to happen.

With particular reference to Harpenden, we are lucky to have had a lot of support from our local councillors but also the involvement of people who are dedicated to keeping the allotment societies in good health. However, nationally the sale of sites continues: April 2007 to March 2009 saw just two of the 98 applications turned down re statutory allotments.

Smaller plots are now not uncommon with 2½ poles being known as a starter plot. Sometimes, plots are now called leisure plots and a more relaxed view is taken on how they are managed.

The provision of allotments in Harpenden followed the national pattern with their being managed until the 1960s by the local town council(s) apart from the private sites at Rothamsted Experimental Station and the ones in East Harpenden.

From the minutes available, 1964 sees the formation of HAGS – the Harpenden Allotments and Garden Society. There is a note from Chairman Ted Allen that encouraged members to send surplus produce to the ‘poor and needy’ in the town. The year 1965 caused a few hearts to jump as it was obvious that the building of the new Grove School could be a potential disaster: the influx of young children beside an allotment site that had no fencing was a worry, added to which there was the possibility that the site could be declared an open space.

To get round this, the members decided to run their own affairs by taking out a lease with the council. Outline plans were prepared for a South Harpenden Allotment and Garden Society (SHAGS) to be formed. The AGM was set up – but not enough people turned up to vote! (Eventually, an East Harpenden Society was also formed on similar lines: they have six sites, two near the River Lea, and are managed, like South Harpenden, on behalf of Harpenden Council, on a self-funding basis.)

Soon HAGS became SHAGS. So far as SHAGS is concerned, 1967 is a turning point. (By the way, in one of the hand written notes that year is a comment that committee meetings should be moved to the second Monday in the month because of noisy children in the room next door.) Mr Ted Allen is elected Chairman and he negotiates a deal whereby some land at Piggottshill is ceded for a new refuse collection centre at Dark Lane and housing, and further housing in Sherwood’s Rise in exchange for fencing, a headquarters and a grasscutter and a rotovator.

SHAGS has nine sites and looks after them on behalf of the Harpenden Town Council on a self-funding basis. It maintains a ‘shop’ whose aim is to supply seeds and other garden supplies at a low cost to members.

In February 1980 the Society gave up one point two acres of land to accommodate the Fine Fare building – now of course the Co-op – in exchange for three acres at Cross Lane and half an acre behind the Plough and Harrow public house.

In the 1970s Harpenden Council asked SHAGS to consider running the Harpenden Rise site and the committee decided to do so. In line with its policy to provide water at convenient positions on each site, in 1974 water improvements were made to Sibley, Aldwickbury, Churchfield and Topstreet. However, when asked to take over running the allotments on the Lyddecker estate the committee declined.

During his talk, Richard told of his experience as a young man when trying to grow the ‘perfect parsnip’. He sought advice from his father-in-law who suggested the use of a crow bar and some sifted soil. The crow bar was driven into the ground to form a hole the projected size of the vegetable: sifted soil gave the plant the means to expand more easily. Six weeks passed and no growth!

Mr White explained to his father-in-law that he had followed the advice to the letter: the hole was made; the sifted soil was used; unfortunately, Richard put the seed in first!

Want to find out more about our local allotments? Then go to our website:
www.shallotments.org.uk