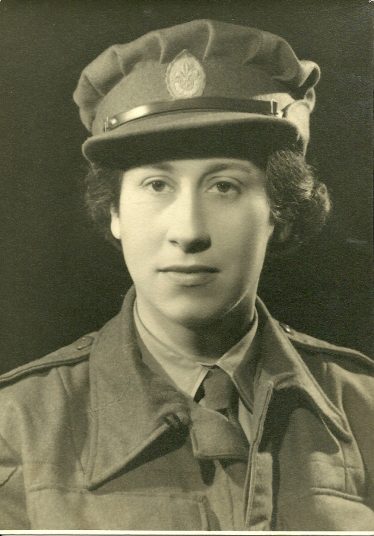 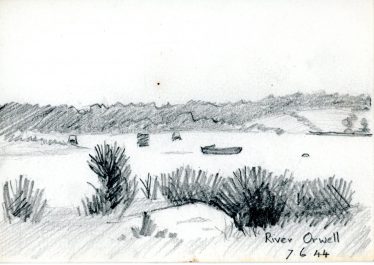 zoom
One of several pencil sketches by Cornelia Clutterbuck when stationed at Ipswich
LHS archives BR 23.6 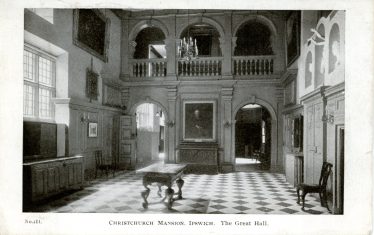 zoom
One of several postcards from Ipswich to her mother
LHS archives RB 23.7 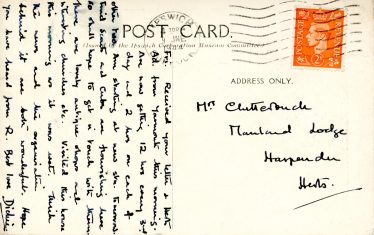 I am very happy to come and talk to you again. This time, as firemen have recently been so much in the news, I thought it might be appropriate to talk about some of my experiences in the N.F.S.

I was one of the first whole time women to join the Fire Service in Harpenden when we were recruited to release the men from Control Room duties during the day, in the same way as volunteer part-time women had for some time relieved them at night.

There were several of us and we worked in shifts either at the Fire Station in Leyton Road where there were full time firemen or at the Water Tower in Shakespeare Road where one of us was quite alone during the day with several fire engines and the Air Raid Siren and the telephone until we were relieved at night by part-time firemen or women.

I never had to sound the siren and except for keeping the old laundry stove going my time there was my own when I sat for long hours in the dark tower surrounded by bunk beds and a sink with a dripping tap. I spent one Christmas Day there.  We were busier than the real Fire Station as we had to keep the log book and the mobilising board up to date. These had to record how many appliances we had available with the names of the men making up the crew e.g. Fireman Hyde gone to the butcher, his place taken by Fireman Bangs. We also had to show how many appliances were available in the Sub Division.

I did this for some time and then was sent for occasional duty at the Divisional HQ at Watford, where we had to keep the site throughout the whole Division up to date. After that I was sent on a residential officers’ training course near Brighton and then posted to another Divisional HQ at St Albans. For a time I was the Senior Woman Officer in that Division and had to visit the women in the Fire Stations throughout East Herts, visit homes of absent Fire Women and find billets for new ones (Shemming). At the Divisional HQ, which was in the Old Vicarage opposite St Peter’s Church there were many Fire Women who worked as clerks in the various departments – Stores, Finance Establishments etc. To keep them fit I had to take them for Squad Drill in the Chequer Street car park once or twice a week, marching them there and back down St Peter’s Street (troops tacked on). Drill competitions between different Divisions were arranged and we practiced near the Verulamium Lakes in the evenings.

Later a more Senior Officer was appointed and I was attached to the Fire Station in Victoria Street which, like Harpenden, was a Sub Division, and went on the normal shifts of 48 hours on and 24 hours off duty.

Life at the Luton Division – With a Murderer

I was there for some time and then I was moved to another Division, this time Luton. After a spell at the old Peace Time Fire Station I was attached to another one, in the Trolley Bus Depot in Park Street. This was much more cramped than the St Albans Station had been and the firemen a much rougher lot, and as they too were on duty for 48 hours at a time. Throughout this time they had to keep their uniforms on, so the mess room became very smelly when the blackouts were up.

The women always had to sit nearest the walls at meal times as otherwise they would have been crushed when the men rushed out when there was a fire call. Our supper here consisted of a mug of liquid which we never knew if it was tea, cocoa, coffee or soup and bread and cheese, which was handed to us without a plate by the fireman cook or his black assistant. At this time there was a search going on in Luton for the murderer of a woman whose body had been found. One night the Police came and arrested the Cook for the murder of his wife, but not until after I had been partnered by him at a dance on the Station!

When D Day preparations were put in hand Firemen and Women were moved from these parts to the East Coast to protect the massed troops from fire. I was sent in charge of a number of women from various places to Gorleston near Yarmouth, where we were quartered in the attics of a large house that had been converted into a Fire Station. The men here had never had women on the station and at first resented our presence and would not trust our ability. We slept in 3 tier bunks that creaked and had an Ack Ack gun on a platform close to our attic. Our main meals here always started with Norfolk Dumplings and, as at other stations, we all had to drink sweetened milky tea from an urn, whether or not we liked sugar, so as to save the tea ration. We still had Squad Drill – on the cobbled quay at Yarmouth.

When off duty we saw lots of military and naval activity: men with blackened faces and leaf camouflage over their steel helmets and laden with their full equipment going on training marches; practices with tank landing craft on the beaches and boats being built from unseasoned wood that had been commandeered from the neighbouring farmlands and parks.

My last move was to Ipswich, where there was a pleasant Hostel for us to go to when off duty. First I worked in a Fire Station down by the Docks and then I was moved to Priory Heath where once again the Station was in a Trolley Bus Depot where the fire engines were kept in one line beside all the buses with our small Control Room at the side and huts at the back, for mess and recreation rooms and sleeping quarters. I was here for D Day when the fireman cook served us with blood red blancmange which he called “Invasion Pudding”. We watched the great fleets of gliders being towed overhead for the Normandy and Arnheim landings. Then we had the first Buzz Bombs coming over with their sickening buzzing. (Women alone in Control Room of lofty Bus Station while bus men and firemen went in underground shelters).

Transfer to the International Relief Service

I was released from the Fire Service in 1944 and the next Spring, while the War in Europe was still in progress I went first to Holland and then into Germany with the International Relief Service, where I had a much harder life but in spite of all the snags then and in the NFS I am grateful for all that I experienced in both.