You are here: HomenextHarpenden HistorynextPeoplenextAdventurersnextGeorge Hogg & his life in ChinanextGeorge Hogg and the celebrations of the 80th anniversary of China Gungho in 2018

Peter Chin emailed us a report of how George Hogg continues to be celebrated. This page starts with a seminar on 26 January 2018, and accounts of events celebrating the Chinese Industrial Co-operative – Gungho – movement will be added. ed 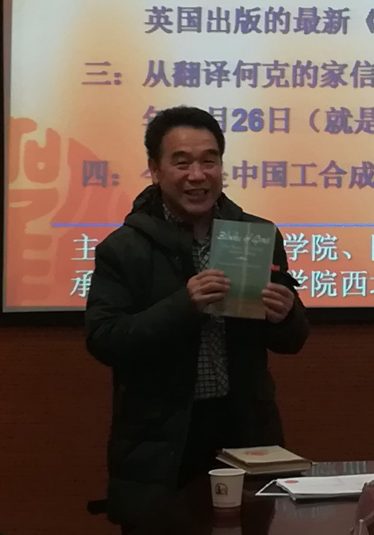 This year a celebration of the 103rd anniversary of George Hogg’s birthday on 26 January 2018 was held at the Eighth Route Army Xian Office Museum, amidst heavy snow in Xian, capital of Shaanxi province in China in western China. (This is the province where George first became headmaster of the Bailie School he moved to Shandan – the link gives a history of the school.)

This is a special day to remember the hero of whom Chinese President Xi had spoken highly during his speech at the Queen’s banquet in UK during his state visit in Oct 2015. But for many years, George Hogg’s birthday was never remembered on the correct date for whatever reason and it was only identified and certified, with the help of his relatives, last June. So this is the first time, we are celebrating a long time remembered hero on his exact birthday.

On January 26, 2018, over twenty people gathered in the Museum to celebrate George Hogg, a great journalist, pioneer and a hero, who helped China during the WWII and rescued over 60 Chinese refugees from the advancing Japanese invasion and civil war, taking them over 600 miles north-westwards on a journey to a safe place in Shandan.

The memorial meeting was organized by the Xian Peihua University (NW Gungho Research Institute) and sponsored by the Eighth Route Army Xian Office Museum. Those present at the gathering included ICCIC members, Gungho researchers, and some museum staff. Mr. Peter Chin, the Director of the Gungho Research Institute, chaired the meeting and he introduced a newly edited biography of George Hogg (Blades of Grass), some studies of him and he mentioned a series of events which had taken place in China, New Zealand and UK in the past two years. He also told the story of his research to identify George Hogg’s date of birth with the help of Mark Aylwin Thomas, George Hogg’s nephew and author of new biography, entitled Blades of Grass, released early last year in UK. 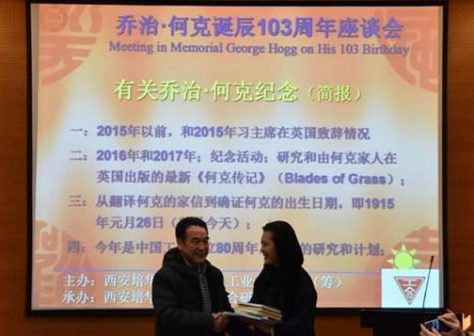 After the presentation, Mr. Chin donated over 100 pages of scanned documents (letters George Hogg wrote to his parents in Harpenden), which he had received from David Waters of St George’s School, Harpenden where George had studied; also pictures of houses where George Hogg lived when he was young, (donated from SACU member); and some books about Hogg and copies of the book that he wrote – I See a New China – in both English and Chinese editions; a Chinese edition of Ocean Devil by James Macmanus, presented by the translators; and a copy of the first letter that George Hogg wrote to Helen Foster Snow in early 1940.

At the meeting, a written speech by Nie Brother Three, one of George Hogg’s adopted children, was read out by the office director of the Museum and a letter from Mr, Lu Hu, the son of Mr. Lu Guangmian, the former Director of NW Gungho Office was presented.

Mrs. Wang, Deputy Director of the Museum, was invited to introduce the Museum, and particularly its exhibition about Helen Snow, an American journalist and writer, who was one of the founders of China Gungho Movement. She also briefed on the plans for some events to celebrate 80th year anniversary of the China Gungho, (Chinese Industrial Cooperative) which started in August 1938, to which George Hogg had devoted his life.

George Hogg will always be remembered.