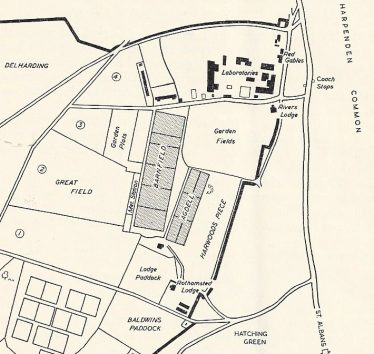 As Harpenden prepared to commemorate Armistice Day on 11 November 2018, we searched for contemporary accounts from 1918 in the journals and reminiscences we know about. However, maybe there are other diaries yet to to be found, describing the relief felt by the civilian population.

“Austria signed an armistice on November 3rd ….. There was a week’s pause and an ominous silence and then we heard of an ultimatum to Germany to expire at 11 o’clock on Monday 11th of the 11th month. ….. The armistice was signed …. at 5 am on Monday, November 11th and by 11 o’clock the order went round “Cease Fire” on all fronts – and the flags were run up and the bells rang out everywhere and even the German prisoners working close by here on the Rothamsted mangold field (1) threw up their caps and sang God save the King with our workmen. Poor fellows, I expect they were as glad as we are that the war is over. I ran up to shake hands with them and speak a few halting words in their own tongue …. it was the simplest act of sympathy and thanksgiving. Rhoda [her sister] and I went down to the splendid spontaneous service in the parish church which was packed from end to end …

“It was dull and drizzled on Monday afternoon but we hurried to get out all the bunting we could and at dusk put out our old hoarded fairy lights (2) and lit every gas lamp and drew up the blinds. The Laboratory turned on all their electric lights for half an hour and made a brave blaze and we were glad that the Hodgsons at Bennetts (3) had made a similar and even prettier show of coloured lights than ours – so ‘Old Harpenden’ had illuminated right loyally for the Peace, as we did long ago at the close of the Boer War.”

(1) The longterm mangold experiment on Barnfield was behind the Wilson’s home – Rivers Lodge on West Common.
(2) These had been used for the end of the Boer War and for the Coronation of Edward VII in 1902.
(3) Gerald Tylston Hodgson, son of Henry Tylston Hodgson of Welcombe (who had died in May 1918) moved to Bennetts during the Great War, and lived there with his wife and family until 1930.

“Now it so happened that in the mangold-lifting season of 1918 we had a number of German prisoners from the neighbouring camp at Hatfield working on the job. They came to and fro each day with their guard by the Great Northern Railway. They had not always the same guard. On one occasion the fresh guard was quite strange to the place, so that instead of he marching them forward, they had to lead him. They came to my house, and all halted there until I was ready, when we all went off to the field together. We were all amused over the episode. These prisoners did their work very well indeed, and soon got accustomed to the plots. The guard finding he was not required to supervise, took himself off to the hedgerow, got under, out of the wind, lit a cigarette and enjoyed his reading of the morning paper. Our own men soon got used to the Germans, and by signs soon understood each other very well.

“During a discussion one day about the war, I heard one of our men say (referring to the prisoners) “It ‘ain’t their fault. They didn’t want to fight no more nor our chaps did, only the poor devils was made to.” On the day of the Armistice everyone was very quiet, no jokes were bandied about as usual, the Germans seldom speaking, even to each other.

As the morning wore on and the eventful 11 o’clock approached there seemed to be an intense silence settling down over everything, as if all nature was listening intently for the all-absorbing verdict to be suddenly proclaimed aloud. However, as a matter of fact, we were some considerable time before we got to hear, and it seemed a terrible long wait. Being away in the field, we saw no one we could ask. At length I saw one of the church bell-ringers hurrying along the path on his way to the village. I sent one of the men to ask “What news?” He shouted back that the Armistice was signed. Our men turned to the German, saying, “It’s all over.” They cried out “Fini, Fini,” and began to caper round; one threw his hat up a tree, whilst the guard threw down his rifle and danced the hornpipe. After the excitement had cooled a bit I called all our men together. I then asked them to lay down their knives and all join hands with me, forming a ring. Meanwhile the Germans stood on one side looking on in astonishment. I expect they wondered what was up. When we had all joined up, one of the men, named Lawrence, called to them, “Come in along with us.” They at once came in and joined hands. I then asked all to join with me in singing the National Anthem, which our men did very heartily, whether in tune or not did not matter. I watched to see if the prisoners attempted to sing, but they did not. I have wondered did they know what we were singing? Most probably guessed. They laughed and seemed very pleased it was as they called, “Finied”.

“Shortly afterwards Miss Wilson, of River’s Lodge, came along, and after talking to me a bit she asked if she could be allowed to speak a few words to the prisoners. On being told that she could do so, she entered into a short conversation with them, speaking in German. They, of course, were very pleased to hear their own language, and most joined in the conversation. Our men listened in wonder. At length one of them nearest the conversing group turned to the others, saying, “Well, I’m blowed, why she a’talking to ’em in their own country like”.  Soon after this Dr Russell (Director of RES) sent word to say we were to go on holiday for the rest of the day. I placed the prisoners on odds and ends, where I knew they could not go wrong, leaving them with their guard”.

Hatfield Local History Society has confirmed that up to 200 prisoners of war were accommodated in the old workhouse, other empty buildings and a labour camp in Hatfield. They were hired out to local farms, and contributed to keeping agriculture and food supplies going. Though the men were at first regarded with suspicion, and there were occasional attempts to escape, they were accepted as useful.