A short survey from Roman times to the 1990s

A walk along Coldharbour Lane, starting at the southern end near Ox Lane (see extract from 1901 map below), and up Westfield Road to Stonemason Close. 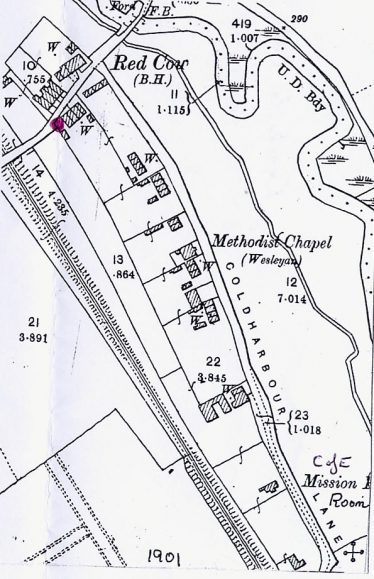 Extract from 1901 map showing site of the cist (marked at lower right corner), and the two churches 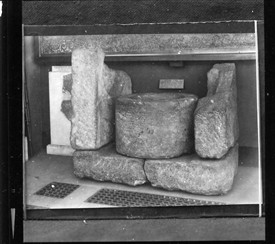 Near the bend, a Roman Cist was found in 1822. It is now in the British Museum. There were other signs of Belgic and Roman occupation here including the name ‘Coldharbour’, which may have some association with early settlement. 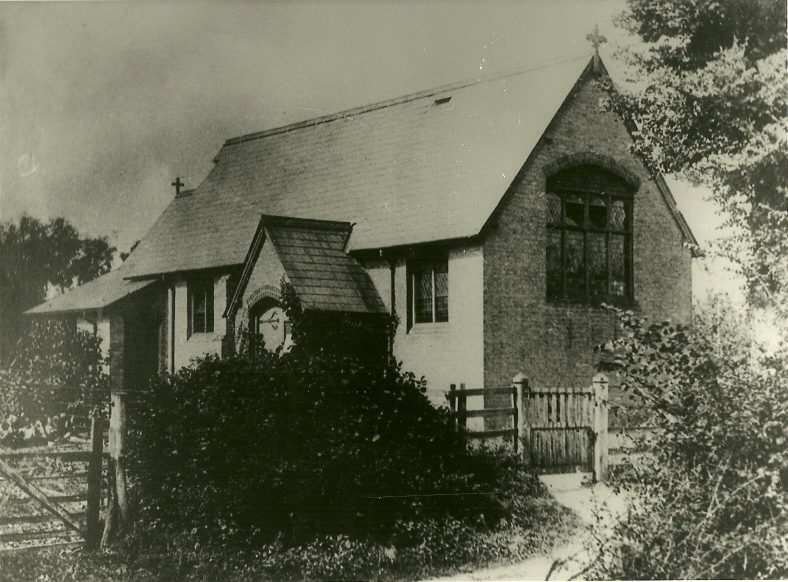 Nearby was the Church of England (Mission) church, opened on l January 1889 and closed in 1965 when the new (All Saints) church was opened in Station Road. The old site was sold for housing: 11-17 Coldharbour Lane. 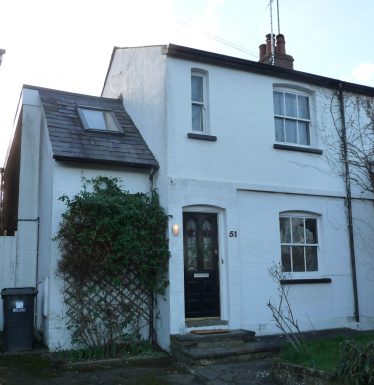 51 Coldharbour Lane – one of a pair of Edwardian semis on the site of the ‘Tin’ church – G Ross, February 2014

Methodists in this area met in each other’s houses during the nineteenth century, until their numbers justified a meeting place and they built a tin hut as a church – although when it rained the preacher could barely be heard! They later purchased a plot of land in Batford and opened the Chapel on the Lower Luton Road in 1905, so leaving Coldharbour. The site was sold for £25, and analysis of Kelly’s directories indicates that 51-53 Coldharbour Lane were built there in the Edwardian period.

Most of the road by the river-side is now taken up with industry, from the junction of Station Road to the bend opposite 17 Coldharbour Lane, but at the end of WWII there was only Fits, the tyre retreading people which later became Waters. Later Chastons’ concrete products were there for a while. Both these sites were liable to flooding, as was all the land along Coldharbour Lane. Nevertheless houses were built at Lea Walk on the floodplain in 1970-72. 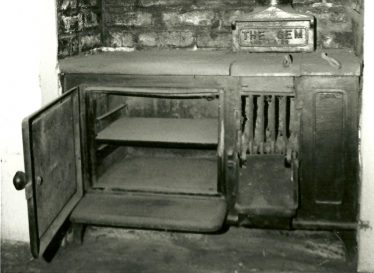 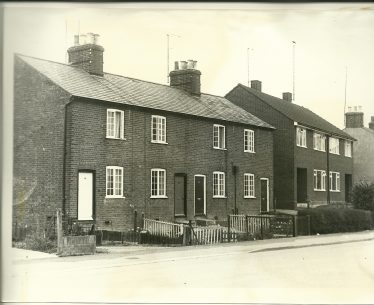 Census returns and old maps show cottages on the north side, backing onto the railway line which had opened in 1860, and some still remain. Demolitions, in-filling and changes in house numbering make it difficult to identify early buildings and their occupants with certainty. However numbers 33-39, 55-57, 61-67 and 69-75 can be matched with cottages marked on the 1901 map.

In 1959 County Councillor Frederick Gingell, a keen advocate of the benefits of allotments, purchased the meadow next to Coldharbour bridge and started the allotments alongside the River Lea, accessed at the northern end from Westfield Road, the previous site further south near the bottom of Ox Lane having been given planning permission for use as a light industrial estate and housing development. Once the allotments were established a clubhouse was created and opened in June 1963, by Mr A H Lugg, Senior Horticultural Adviser at The Hertfordshire Institute of Agriculture at Oaklands, St Albans. The clubhouse was rebuilt in 1993 and opened by Leslie Gingell, Frederick Gingell, with a sign over the door – ‘The Potting Shed’ – reminiscent of the Rothamsted Allotment Club. The Coldharbour Lane Allotments Club continues to run 144 plots – www.chlaclub.weebly.com.

The Red Cow and Westfield ford 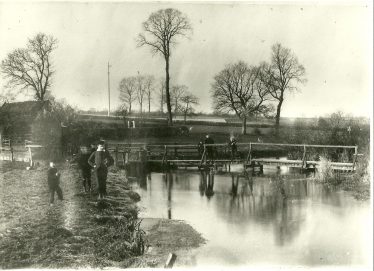 Coldharbour/Westfield footbridge, with Randall’s nursery in the distance, c.1910 – LHS 222 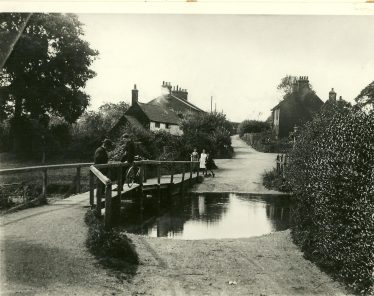 By the Red Cow public house was Westfield or Coldharbour ford and footbridge. The footbridge was a rather tumbledown affair with big gaps in the planking, and the ford was passable only if water levels were low. Work started on building a new bridge here in September 1963 and this was opened on 18 April 1964. The river was straightened out, instead of the previous S-bend by the allotments. The river was dredged to try and reduce the flooding threat. 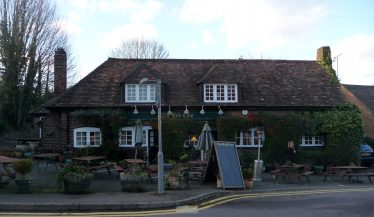 The Red Cow public house was there in 1851 and was enlarged when an adjoining cottage was pulled down in 1939, this having once been a shop. Behind and below here, D.V. Baulk set up his builders’ merchants business in 1962, supplying everything from sand and bricks to ready-mix cement. This was taken over by Pinewood, garden merchants.

Turning up Westfield Road, at the end of a row of cottages on the left was a wooden hut, used until the war by Miss Young, a hatmaker. She also used to collect jam jars

and children would take them to her and receive a penny for each one – though I don’t know what she was collecting them for. After the war J. Craggs, a tailor, used the premises. All have since been demolished, and new houses, including Hyde Close, built in the 1960s.

From railway to Lea Valley Walk

The railway bridge which crossed over the former Hatfield to Luton railway was in use from 1860 to 1965. After closure the bridge was dropped and the cutting partially filled in and made into a footpath – The Lea Valley Way. The southern section from here opened on 11 August 1991, so completing a 57 mile walk along the Lea Valley as far as the Thames. Beeching Close on the west side of former track reminds us of the civil servant who wreaked havoc across the land closing this and many other railway lines. 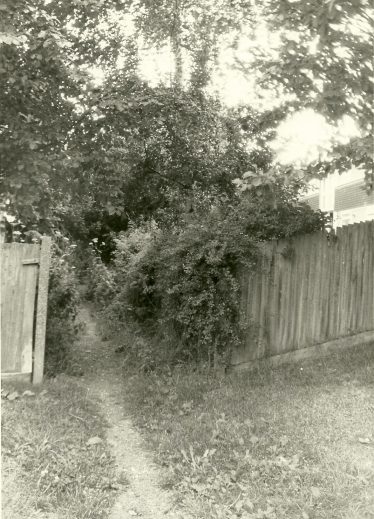 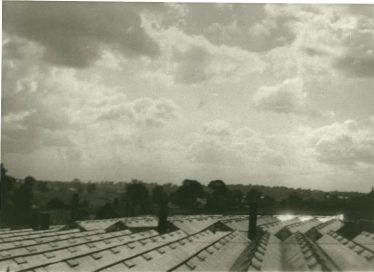 Beside the line to the north of Westfield Road stood greenhouses  producing flowers, tomatoes and lettuce etc until they were no longer profitable. This Westfield Common Nursery belonged to J Parrott until H B Randall took it over, along with a nursery on Ox Lane, in about 1890. Randalls sold the Westfield nursery to Benjamin Phillips* by 1900, who in turn handed on to Frederick Charles Moss, who ran what then became Harden Nursery from about 1930 to 1955. He lived at Norrysbury (now 17 Rye Hill), an isolated house. F C Moss died on 23 January 1948 at the age of 69. Planning permission for redevelopment was sought in May 1956 and the site is now occupied by Riverford Close.

Further up was High Moor ‘a bit more than just a market garden’. The owner, Ernest Sealey grew fruit and vegetables, but was also a bee keeper of some repute, with many hives. Randalls Nursery in Ox Lane closed in September 1959. An auction was held on the site on 7 October 1959. 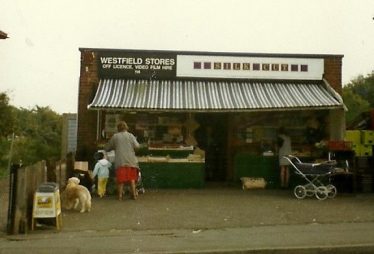 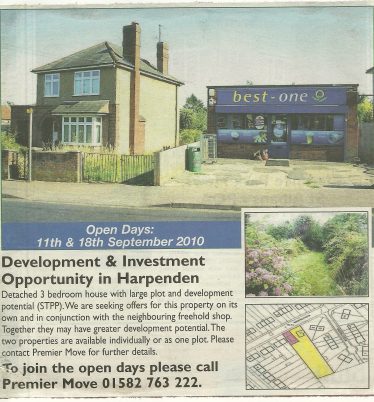 The land for the Cemetery was bought in 1923 and the first burial there was on 4 March 1926. in 1933 Toilets were provided for mourners and grave-tenders and a garden of rest opened in April 1958. Trees were planted beside Westfield Road in 1940 and in September 1950 an extension was consecrated. Later some of the site was sold for the building of Lea School in 1975 and more recently another plot was sold, on which now stands a block of flats – Robin Court. The fields beyond to the north were sold and Springfield Crescent built in 1956. 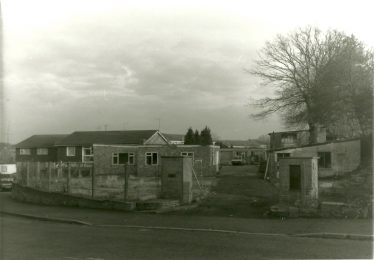 Alongside the Midland main railway line, Alderton, the stonemason, set up business in 1930. This was taken over by Ganders in 1969, finally closed in 1991. Evidence of their work can be seen all round the cemetery.

The first shops at this western end of Westfield Road were built in 1968, and these saw various uses, including a greengrocer and a carpet shop, but later occupied by a hairdresser and a newsagent. The other block, built in 1975, now deals in motor cycles.

The last part of what was formerly Westfield Common (a large field alongside the railway) was sold in October 1963. The horses which grazed there left and Lindley Close built.