Burial Mound in the Lea Valley

Romano-British sarcophagus found in the 1820s 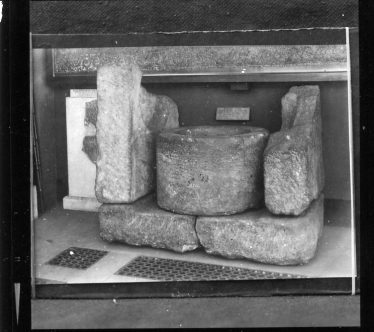 zoom
Finds in the Lea Valley 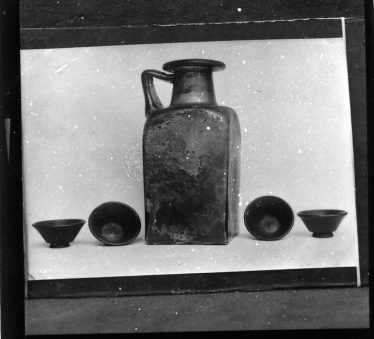 In the early years of the nineteenth century a local farmer, Joseph Freeman, rented a field between Coldharbour Lane and the River Lea from Francis Pym and Charles William Packe, two of the biggest owners of land in Harpenden.  In this meadow was a tumulus, roughly fifty feet around the base and twenty feet high.  At some date between 1822 and 1830 it was opened and a massive stone sarcophagus of Romano-Celtic origin was unearthed.

The sarcophagus was roughly hewn out of gritty calcareous stone and consisted of a hollowed-out tub-like coffin, about three feet in diameter and two feet high, which was sandwiched between two separate slabs, one above and one beneath, each a foot thick and about five feet long by three feet wide.  During excavation the top slab, which was hollowed in the middle to fit over the coffin like a lid, was broken asunder to discover the contents and the base, too, was damaged during removal.

Inside the coffin were five objects.  One was a square jar with a reeded handle.  It was about fifteen inches high, made of pale green glass, and had the Mediterranean maker’s pattern stamped on the bottom.  It contained human remains.  There were also four small shallow earthenware dishes of Samian ware.  Each was marked with the Maker’s insignia and of a type commonly used for libations.  They may have held offerings of food and drink.  All the objects dated from c150 A.D.

The stone sarcophagus, the glass jar and the earthenware vessels, though unique to this site, were common in burials of this period.  Each is paralleled by similar finds in Britain and Europe.  Each has its own detailed history of evolution, custom and use.

In 1831, a few years after the find, Mr Packe- joint owner with Mr Pym of the meadow in Coldharbour Lane – exhibited the contents of the coffin to a meeting of the Society of Antiquarians in London.  Thirteen years later he presented the complete assembly – the pieces of stone forming the sarcophagus, and its contents, to the British Museum where they are still exhibited – though divided between separate galleries.

According to the Victoria County History the coffin section of the sarcophagus had lain for some time in the yard at Upper Topstreet farm in Crabtree Lane, where it was used as a trough.  This farm also belonged to Mr Packe.  The farmhouse, built in 1650, stood close to a conjunction of Roman roads and had Roman bricks in the superstructure.  But there were also some half-columns and a carved stone fragment, thought to be Roman, built into the chimney breast, and these had only been there to certain knowledge since 1854.  Was Packe a Magpie of Roman Antiquities, harbouring his finds among his properties?  At the time it was a common and respectable pastime for gentlemen of wealth and leisure.  Carvings from Harpenden’s Norman parish church had disappeared when it was demolished in 1862, to be retrieved later from the garden of Welcome, (now Harpenden House Hotel) the home of Mr Tylson Hodgson, another avid collector of historical objects.

Be that as it may, nothing now remains of the tumulus in Coldharbour Lane.  It must have been razed before 1860, when the lane was realigned to accommodate the construction of the Great Northern Railway.  A sale map shows land conveyed to the Railway Company for that purpose.

The position of the find is marked on the earliest Ordnance Survey maps and corresponds, today, roughly with the side entrance to the Works of a firm of Mechanical Handlers.  A less romantic setting would be hard to find.