Harpenden, Batford and the Danelaw Boundary

A report on the presentation given to the Society by Alexander Thomas on 22 March 2016.

In March 2016 Alexander Thomas (a PhD Candidate in Archaeology and Anthropology within the Department of Archaeology and Anthropology at the University of Bristol) gave an illustrated presentation to the Harpenden History Society about the progress of his sideline research into Batford Field and his main research into the Danelaw boundary. This report was first published in Newsletter 131, April 2017. Alex addressed these issues in three parts:

1  The Archaeology of Harpenden and Batford

In the first part of his talk, Alex contended that Batford and Harpenden were originally one settlement. He suggested that Batford was the ancient centre whilst the modern centre was probably established during the early-medieval period. There are two intriguing pieces of evidence Alex suggested for this. First the name of Harpenden, which comes from the Old English herpe dene meaning the path through the valley. This name likely references the A1081 – probably a herepath with prehistoric origins. Second the position of St Nicholas Church, which was constructed in the early 13th Century as a chapel-of-ease to the parish church of St Helens, Wheathamptead. He posed the question: why position a church so far from the main road and in an area of no human activity? A centre must have been established there between the end of the Roman period and the early 13th century.

At this point, Alex displayed an extract of the 1799 Church Commissioners’ map, held by Westminster Abbey Library and Muniments, showing the area covering Batford and Harpenden. The map is significant, Alex pointed out, as it is a cartographic source showing both pre-enclosure and post-enclosure field boundaries and tracks. He explained that Harpenden and Batford have a long tradition of wheat growing which may stretch back into the Roman period, maybe even into prehistory. He went on to explain that the Harpenden landscape is characterised by connected places and connected spaces. Different places and spaces are connected by tracks or drove ways such as Piggotshill Lane / Dark Lane, Top Street (Crabtree Lane), Stakers Lane (Station Road) and Ox Lane. These drove ways, used up to modern times by farmers to drive their sheep to the River Lea, as well as other tracks and boundaries, have persisted within the landscape for centuries.

Alex went on to reveal why a network of drove ways and tracks may have been needed. The Medieval charter of Edward the Confessor mentions Hyde Mill in its definition of the parish of Harpenden and the area of land given to the Abbot of St Peter at Westminster (Westminster Abbey). The Domesday Book is the only document that sees Wheathampstead and Harpenden as the same entity and the entry for Wheathampstead mentions four mills present in this landscape. Other research compiled by Les Casey of the History Society suggests that the mills could have been Batford, Pickford, Leasey Bridge and Wheathampstead Mills (which incidentally are roughly equidistant). Alex argued that standing building and archaeological evidence may demonstrate these water mills along the River Lea were operational during the Saxon and Roman periods.

He explained that there exist two types of water mill in the archaeological record: horizontal and vertical mills. Horizontal mills are the earliest examples and disappear archaeologically in the 13th century. Old photographs from the Society’s archive reveal that Batford Mill once straddled the River Lea. Mill buildings, Alex highlighted, that straddle their water source are a key characteristic of horizontal wheels. What is intriguing, Alex suggests, and referring back to Casey’s research, is that Batford and Hyde Mills are identical in construction. By way of comparison, Batford, like Hyde, could have been constructed in at least the early-medieval period.

The field at Batford, which Alex surveyed in March 2015, extends eastwards along the Lower Luton Road (B653) towards Wheathampstead and north up Common Lane. According to the Wheathampstead Tithe Map Part 1 this field has the name, Bonny Boys Farm and Homestead. The site is coincidentally where a new secondary school is planned. 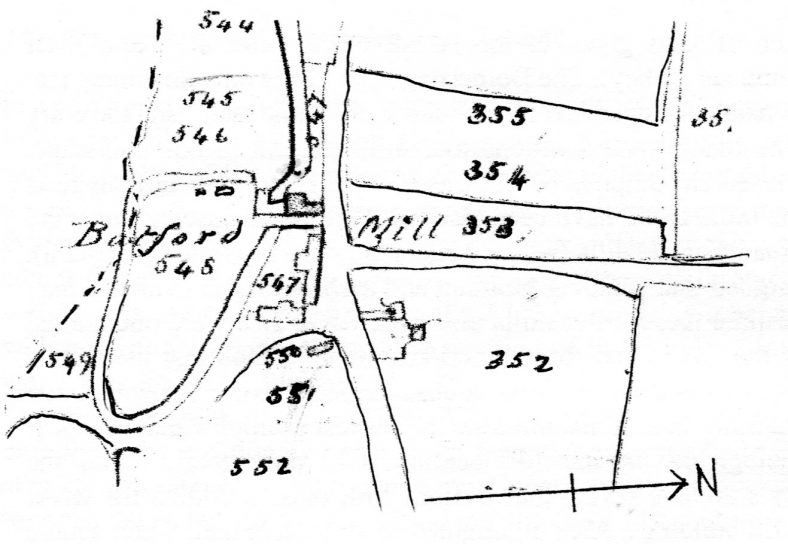 The Lower Luton Road meets Common Lane to the west of Bonny Boys. Crabtree Lane at lower left, beyond the river Lea. 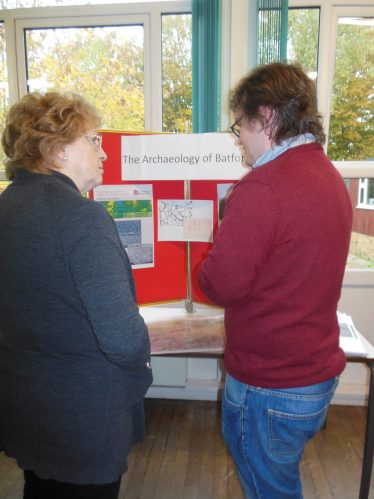 Alex had introduced the subject of his survey with a display at the Society’s exhibition in September 2015 in Park Hall and in Batford Community Centre in October 2015. Visitors had shown considerable interest, which probably led to the capacity audience at the Harpenden Public Hall in March 2016.

Alex is a Landscape Archaeologist, which essentially means he does not dig. Landscape archaeology was a coin termed by the late Professor Mick Aston and is heavily influenced by the work of W.G. Hoskins and 1960s New Geography. As a landscape archaeologist Alex tries to build relative chronologies of the landscape by utilising documentary and cartographic sources. He also uses archaeological theory, Geographical Information Systems (GIS) and other databases, as well as non-intrusive surveys such as geophysics. In March 2015 Alex systematically went over part of the Bonny Boys site using a Geoscan RM15 resistance meter and a Geoscan FM256 Fluxgate Gradiometer (magnetometer). The site was identified through map regression analysis which showed a building seemingly associated with Batford Mill that was demolished some time between 1840 and 1890.

The interpretation of these results has been aided by experts at the Universities of Bristol, Cambridge and Reading as well as at the Museum of London. Everyone agrees that there are archaeological features present within the field. The resistivity results demonstrated that the remains of a building associated with Batford Mill still lie hidden beneath the ground. The magnetometry results suggest there may also be a timber framed building lying underneath the brick built building and this could date back to the Saxon period. There are other features present in the survey that could be historic including prehistoric pits, or even mine shafts. There are some interesting earthwork features, a couple of dene holes, within the field which could also be entrances to mine shafts. He will be going back to do a Ground Penetrating Radar survey this year. The data from this survey should determine how different archaeological features present are related.

Alex, within his article about the survey on the Society’s website, writes: “Whatever the date or function of these geophysical and earthwork features, it is clear that there is important archaeology in this field in Batford and this needs to be investigated further. We should never take our heritage for granted: archaeological remains are a finite resource. These archaeological discoveries are particularly important given the limited archaeological fieldwork conducted around Harpenden. The results from this survey challenge yet further our understanding of this historic, and may be prehistoric, town or settlement.”

3   The Archaeology of Ephemeral Boundaries

The Archaeology of Ephemeral Boundaries was the third thread of Alex’s presentation. This part related to his main PhD research on the Danelaw boundary: an almost imperceptible boundary running roughly southeast to northwest across the middle of England, dating from the 9th century. It separated the Kingdoms of the Danelaw (the Vikings and King Guthrum) from Wessex (the Anglo-Saxons and King Alfred.) The Danelaw boundary is an example of an unmarked political boundary. Utilising archaeological GIS data in a novel way, he is looking at the effect the Danelaw boundary had on landscape and how this affected the surrounding communities.

Alex’s research picks up many unresolved threads within the archaeological and historical discourse:

His preliminary results seem to vindicate the theories of historians such as R.H.C. Davis and David N. Dumville. For example, the Danelaw boundary does seem to follow Watling Street and the Kingdom of Wessex does seem to have held on to the Kingdom of Essex. It also seems that the political effect of the border has been felt for centuries after its creation, and may even have impacted the creation of the current post code sectors in the 1960s!

This methodology will hopefully allow him to examine how the dividing line affected trade by feeding seemingly disparate pieces of data into a relational database. To assess the effect the Danelaw boundary had on surrounding communities, Alex is comparing it to similar political boundaries from around the world, such as the Green Line in Cyprus.

Alex conducted a more extensive survey of the lower field of Batford Farm in the spring of 2016, which confirmed the presence of archaeological remains which will require further investigation, as reported in the Herts Advertiser of 15 December 2016.