A changing community - the 20th century

‘Opening up’ at the common 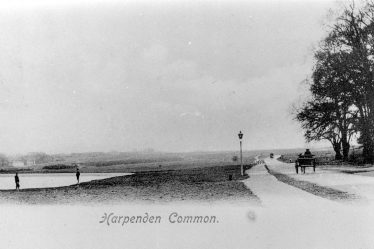 Before the car invasion

The coming of the motor car caused changes in the appearance of the village. Cars started to appear in the early years of the century: there were complaints about speeding in 1913. It is recorded that cars, ‘opening up’ at the top of the common, had frequently reached a speed of 40 miles an hour by the time they reached the Old Bell. 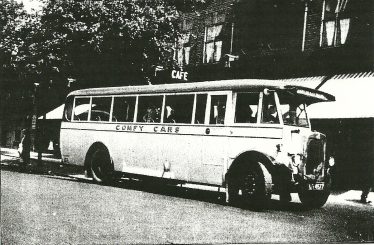 The first bus service was started in 1910 by a group of Luton businessmen, who bought three second hand buses from a London operator, and ran them between Luton and St Albans. In the early days they did not run on Sundays. By the early 1930s there were three separate operators running through the village, including Harpenden’s own Comfy Cars, who had a depot on the Luton Road, where Ogglesby’s Garage was until recently.

The number of cars had grown dramatically, and in the late 1920s and early 1930s there were many schemes to ease the flow of traffic around the village. Sun Lane was widened and the so called Toll House cottages which protruded into the High Street just south of Sun Lane were pulled down. In 1928 the Cock Pond was filled in and the small stream along the Lower High Street was piped underground. At Southdown, the junction of Southdown Road with Piggottshill Lane was widened, and many of the lanes around the village centre had awkward bends removed. We may, perhaps, be permitted a wry smile that many of the same roads have now had traffic calming schemes installed to slow the motor car down!

The 1930s was a particular time of change in the High Street. The east side between Thompsons Close and Vaughan Road was extensively rebuilt. The Old Brewery had covered much of the site: it was replaced by the Methodist Church and shops.

Buildings near Broadway Hall being demolished

Broadway Hall, the covered market, was built in 1933 on the site of an old cottage (Bowers cottage, part of Bowers Farm). It has since been replaced by Sainsbury’s. At the same time, on the other side of the High Street, the block between Lloyds Bank and The White Lion was completely rebuilt.

The people of Harpenden celebrated the end of the war in Europe with a united Civic Service at the Parish Church, followed by a series of bonfires all over the village, each area trying to have the biggest. The following day there were numerous street parties and teas for the children, before people settled down to restoring life to normal.

A need for new housing

The first need was for housing. House building had been at a standstill during the war, but the population had increased by nearly 3,000 over its pre-war total of about 11,000. In addition men and women were returning from the Forces, all of them wanting somewhere to live. The Urban District Council began development of the Batford Estate, for which plans had been made before the war. 200 houses were to be built there. As a temporary measure, when the German prisoners were repatriated, families were moved into the Prisoner of War Camp at Batford, each hut being adapted to take two families. 25 prefabs were erected at Southdown and were occupied until 1964 when the permanent houses in Oakley Road were built on their site. Squatters settled in the vacated military Nissen huts in Cowper Road; the council restored heating, lighting and sanitary facilities on a short term basis.

The Harpenden Development Plan, published in 1951, identified four areas for future development, at Batford, The Grove, West Common and Wood End. All of these now have extensive estates. As they were developed, new junior schools were built to serve them. Two junior schools with inadequate buildings were closed, the children from St Mary’s at Kinsbourne Green transferred to the newly built Roundwood in 1955, and in 1964 the children from St John’s at Southdown went to The Grove, also new. The increasing number of children made a secondary school necessary; Roundwood Park opened in 1956 to supplement Manland, now Sir John Lawes.  Nine years later St George’s became part of the State system as a Voluntary Aided School.

Shopping facilities have adapted to the changing conditions of the past 50 years. Until just before the war, most of Harpenden’s shops had been locally owned. Things began to change in 1936, when Sainsbury’s, Woolworths and Boots were built on the site of the old Harpenden Brewery buildings. But the beginning of perhaps the greatest change came in 1961 when Harpenden’s first supermarket, the Premier (later Iceland) opened. Nine years later, Sainsbury’s opened on the site of Broadway Hall, the covered market. Southdown had its supermarket in 1980, when Fine Fare (then Somerfield, now The Co-operative) opened. 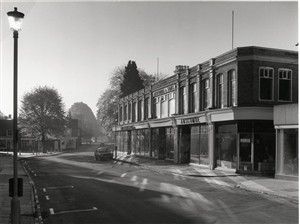 Two years later Anscombe’s Department Store in Leyton Road closed. It was Harpenden’s oldest business, famous locally for its overhead cash rail system, which was in use until the final day. Waitrose opened on the site in 1983. As these larger shops opened, many smaller ones closed. The growth areas in Harpenden at present appear to be those providing financial services, and eating places, including numerous takeaways.

Public services have been changing too. In 1957 street lighting changed from gas to electricity. Gas had been supplied from the gas works at Southdown. With the advent of natural gas that site became redundant, and is now an industrial estate. 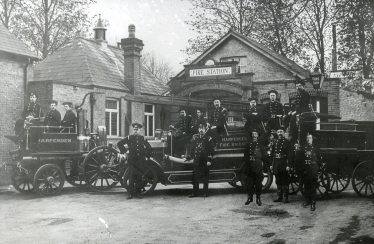 The Urban District Council’s Fire Brigade became part of the National Fire Service during the war. After the war, Fire Services became a County Council responsibility. A new Fire Station opened in 1992; the existing one, 90 years old, was demolished to give better access to James Marshall House and the Day Centre. In 1999 a new Police Station opened, replacing the original which had been in use for nearly a century. It closed for public access in 2012. 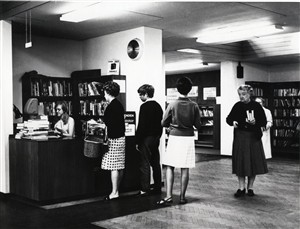 The Red Cross staffed an emergency first aid centre at Victoria Road throughout the war.  There was a proposal to demolish the old buildings, but in 1947 they were given new life when the Public Library transferred there from Harpenden Hall, and the Further Education Centre moved its classes there from Manland. In 1964 the Library doubled its size with an extension across the playground. [Eric Brandreth, who died shortly after writing this page, was Harpenden’s Librarian and custodian of its local history collection. In 2013 the library moved to the Woolworths/Argos site on Lower High Street, to make way for a Free School in the Victorian Board School buildings, which had been vacated in 1939 when the school moved to form Manland Junior School and Manland Secondary School (now Sir John Lawes School. ed]

The Red House Memorial Hospital opened in 1941. The work of the Memorial Nursing Centre at 40 Luton Road was transferred to it, and the Centre was promptly requisitioned by the Army, who billeted members of the ATS there. The hospital became part of the National Health Service in 1948. As the policy of concentrating facilities into larger units developed, the maternity ward was closed in 1985, despite strong and vociferous protests from Harpenden residents.

Harpenden has long been a caring community: during the war various organisations raised funds, particularly for the hospital and for local service people. When the Welfare State was created in 1948, a public meeting was called to consider whether there might still be a need for such activity in the future.

To foster and encourage the spirit of service

From this meeting the Harpenden Trust was formed. Its aims were to foster and encourage the spirit of service in the community, to help and residents who may be in need and to raise funds so that the work may be well done.  The Trust has more than fulfilled those aims for the past 60 years.  Persuading the County Council to build a Day Centre in Rothamsted Park to be managed by Harpenden itself is just one of its achievements.

The National Children’s Home came to Harpenden in 1910 but new patterns of child care caused it to close its home at the Oval in 1985.