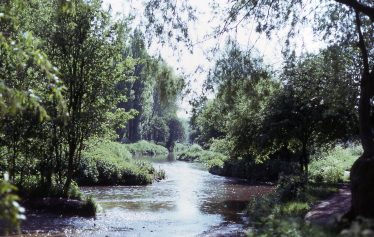 The River Lea at Batford, after restoration of weirs and ponds by the Upper Lea Valley Group, 1970s

In the late 1940s the River Lea was badly polluted by Luton’s Sewage Works at East Hyde. Although Luton Corporation made valiant efforts to improve the water quality, it took time, and these conditions put an end to the watercress industry at Batford. A few years later the glasshouses in the area, producing salad crops and flowers for the London market, were closed down, and the river valley had a rather neglected air.

In 1971 a group of public spirited people formed the Upper Lea Valley Group, with the aim of making it an attractive place once more. They rebuilt the weir, cleaned out the old watercress beds, restored a large pool, and created a riverside walk. In 1995 the area was declared a local nature reserve; over 90 species of birds have been seen there.

As the town grew, so did its traffic. Car ownership has increased dramatically – at the 1991 census Harpenden had 524 cars per 1,000 people, one of the highest ratios in the country. Much work has been done to improve the road system. After the war there were 50 miles of public roads within the Harpenden boundaries. In 1953 work began on making up the 10 miles of residential roads which had been left unmade when the houses were built. 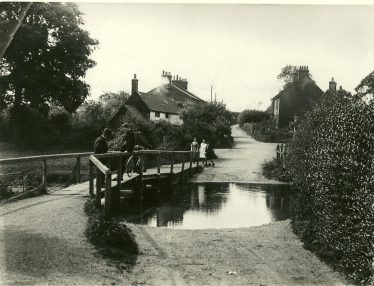 The Bridge & ford at the bottom of Westfield Road, with the Red Cow on the right, c.1930s.

A new bridge across the River Lea was built in 1964 at Westfield Road, to replace an ancient ford. 30 years later, both it and Pickford Bridge were rebuilt. In recent years with emphasis on greater safety, traffic calming schemes have been introduced in many areas of the town.

Closure of the Nickey line

As the number of cars has increased, other forms of traffic have declined. The Nickey railway line to Hemel Hempstead closed to passenger traffic in 1947 and closed altogether in 1979. The Luton to Hatfield branch line, with a station at Batford, closed in 1965. Both these lines have been made into attractive walks. The steam trains on the main line were replaced by diesels in 1960 and some 20 years later the line was electrified. 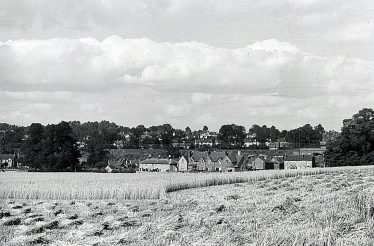 In 1940 the Wartime Agricultural Executive Committee requisitioned a large part of the Common for growing wheat and potatoes; it was returned in the autumn of 1955 and re-sown with grass the following spring.

The Urban District Council bought Rothamsted Park in the late 1930s and football and hockey pitches were laid out before the war stopped an further development. After the war there was a quoits bed just inside the entrance. The Quoits Club became the all England champions in 1963 and 1964 but closed a year or two later. The site is now a rose garden.

In 1960 the long awaited open air swimming pool opened after many years of campaigning. It was replaced in 2000 by an indoor pool open all year round. The adjoining sports hall was opened in 1975 by Harpenden’s much loved local resident, Eric Morecombe. The Rugby Club outgrew its ground at Overstone Road, and in 1964 moved to a more spacious site in Redbourn Lane.

Celebrating the Festival of Britain, 1951

Festival of Britain – Rolling the barrels

Older inhabitants may remember the celebrations for the Festival of Britain in 1951. Harpenden revels lasted a whole week, and attracted a half column report in The Times newspaper. There were races in the High Street: a pram race for the ladies, a barrel rolling race for the men. The boys held a soap box derby*, and the girls a hoop race. There was an evening Ball, at which the Queen of the Revels was crowned by Frank Salisbury, the world famous artist. The celebrations concluded with a fireworks display on the Common. Harpenden’s population was just over 14,000, but the fireworks attracted a crowd of 30,000 people, many of them from towns and villages roundabout.

Fit for the future

Harpenden Town Council, created in 1974 following local government reorganisation has, together with its predecessor the Urban District Council, overseen the development of the town during all these years.  After 60 years in Harpenden Hall, in 1994 the Town Council returned to an elegantly refurbished Park Hall, its original home, and the new adjoining Town Hall. It is well placed to continue its record of service to the community of Harpenden into the 21st century.