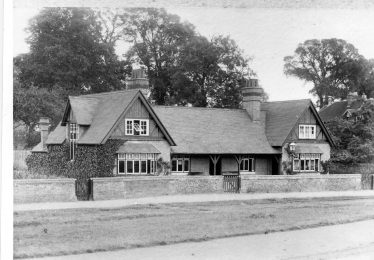 The Society of Friends dates its birth as Whitsun 1652 when its founder, George Fox, preached to more than a thousand people on Firbank Fell in Westmoreland.  During the next few years the message of Quakerism was carried to every part of the country, by preachers mainly from the north of England.

There are no records that any of these preachers came to Harpenden, but they did visit nearby places in Bedfordshire and Hertfordshire.  From these visits several meetings grew up.  An Act of Parliament of 1670 made these meetings illegal.

In the early days it appears that Quakers in the Harpenden area attended other meetings in the district round about.

(1)   In a raid on one such illegal “ conventicle” at Caddington, Beds, on the 4th November 1683, Thomas Liberty was arrested and fined.

(2)   In 1732, Edmund Neale a Quaker living at Hammonds End Harpenden is named as one of the trustees of Cross Lane Meeting ( a meeting house and burial ground which was situated between Redbourn and Hemel Hempstead).

As far as is known there was no organised meeting of Harpenden Quakers until the end of the first world war.

In 1918 a few families began to meet in one another’s homes, to worship according to the manner of the Friends and in 1925 Sir Halley Stewart offered to them the use of a “garden room” on his estate at the Red House (now Harpenden hospital) for their Sunday morning meetings.  Sunday evening meetings were held from time to time at the Swallow Café in the High Street. With this regular meeting place on Sunday morning and with a growing membership, application was made to the Society of Friends for recognition as a Preparative Meeting, and this was established in June 1928.

Within the first year the question of building a meeting house was raised, a piece of land acquired in Stewart Road and architects appointed to draw up plans.  Meanwhile, the British Legion had decided to vacate the old “Institute” let to them in Southdown Road and the property came on to the market.  These premises built in 1887 for the Harpenden Lecture Institute and Reading Club were described as consisting of…

“ a commodious lecture room holding 100 persons, a reading room, a large recreation room for lads, and a dwelling house for the caretaker…”

Move to the old Institute

Friends considered this to be a much more attractive site and after negotiating release from their contract to purchase the Stewart Road site, bought the buildings and the orchard at the rear, for the sum of £1500.

Renovations were made to the premises and the official opening of the Harpenden Quaker Meeting House, Southdown Road, took place on Saturday April 8th 1933.

It is particularly interesting to note that Wilfred H Brown, then a member of Harpenden Meeting, who presided at this opening ceremony was in fact a direct descendant through Daniel Brown who came to Luton in 1700, of the Brown family of Poddington in North Bedfordshire, who became Quakers in 1654 when they were convinced by one of the original preachers from the East Riding of Yorkshire.

Since that opening in 1933 there have been only minor building alterations and redecorations.  Now in 1972 considerable structural changes, new flooring and roofing, heating installation and a general refurbishing throughout, bring the premises in line with modern buildings.

Written by Pat Wilson for the re-opening of the Friends Meeting House on Saturday 16th September 1972.