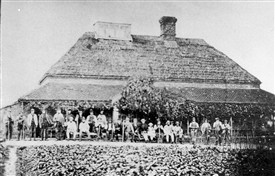 THE day of the Allotment Club was that of the Annual Dinner, this event always taking place on the first Saturday of June.

Old members have told me that for the first few years the dinner was held in the Club House itself, but as the number of members increased the club room became too small for the occasion, and so a large frame tent was hired each year and erected in the Laboratory grounds, and here henceforth these annual proceedings were held, being always spoken of as the Club Feast.

This Feast Day was a great day at the Laboratory also. Now and again the joints have been brought here on the afternoon of the day previous, being placed on a long bench in the back Laboratory, and then we had, of course, to go, see, and admire. Sir Henry also, if he happened to be in the Laboratory, being one amongst us. Early next morning they were despatched, those for boiling to the large coppers in the brew house of River’s Lodge close by (kindly placed, year after year, at the service of the Committee by T Wilson Esq), and the other joints for roasting to the neighbouring bakehouses. And they were joints too, the like of which were seldom seen, save on these Feast days, the largest and most admired being the round of salt beef, the gift of Sir John, as president of the club, a similar joint being given by him each year. This huge round weighed generally 94 to 96 lbs. I don’t think I ever knew one weigh less than 90lbs.

Huge joints – cooked in a copper or local bake house

Sir John always presided over the dinner, carving this joint himself, a special set of carvers being sent from Rothamsted for his use. Once only in my time do I remember him being absent through illness. Other carvers beside Sir John were the rector and the curate of the parish, also some of the local gentry. The members of the Committee attending to the wants of members.

The task of lifting this huge round of beef out of the boiling water of the copper was always a rather ticklish one, two well-cleaned garden forks being used for the purpose. I recollect what sighs of relief went up when it was safely accomplished, and the meat, resting on its special dish, was carried into the tent on the Laboratory hand-barrow, or wheeled in on our platform barrow and safely deposited in its appointed place on Sir John’s table.

In addition to this, another smaller round of salt beef was provided of about 40lbs in weight, together with four large legs of pork, two of which had been salted for boiling, the other two being fresh for roasting; also there were four large legs of mutton, besides two or three other joints, the gift of friends.

Peas puddings – but no sweets

There were also ten or twelve large peas puddings, twelve tins of potatoes (these being baked under the joints), ten loaves of bread, two barrels of beer and, in later years one or two cases of mineral waters for the newer teetotal members.

No sweets of any sort nor cheese were added to the menu, which has continued the same the whole length of years .

Generally about 140 members attended the Feast, they paying one shilling each towards expenses.

Members attending had to bring their own plates, also knives and forks, and one could see many of the old members wending their way across the common with plate, knife and fork, generally tied up in a red handkerchief and tucked under the arm. Some of these old members arrived and took their places in the tent long before the appointed hour. Doubtless they came thus early so that they could enjoy the excitement and bustle attendant on the setting out of the feast. I have spoken of pint pots as being used for drinking vessels. Before the Great War it was an almost unheard of thing for a member to call for half-a-pint of beer, he was considered a poor weak fellow who could not manage to drink a pint; but then beer was only 1½d a pint, now that it is sixpence half-pints are frequently in demand.

Elections to the committee

At the finish of the dinner the  business meeting came on, over which Sir John, as president of the club, presided, the Secretary read his yearly report, and the election of Committee for the ensuing year took place.

After this business meeting came two speeches, first by the Rector, and the other by Sir John. These speeches were eagerly looked forward to, and for many days after one could hear items of the speech being discussed in the Club House and also by the labourers in the fields.

These proceedings being over, the visitors took their departure, the members passing the rest of the day in quiet enjoyment.