Harpenden - twinned with Alzey since 1963 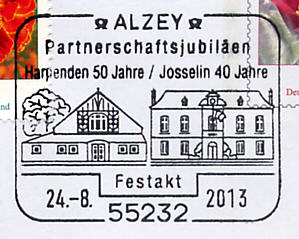 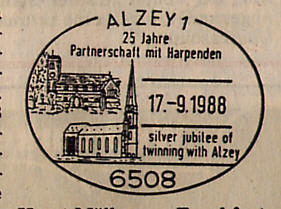 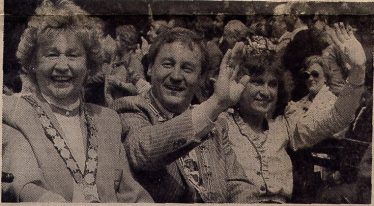 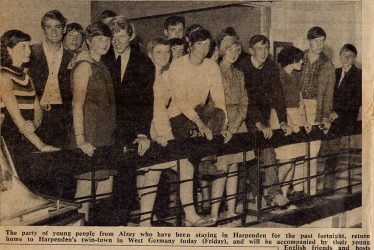 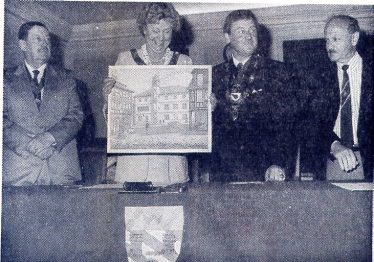 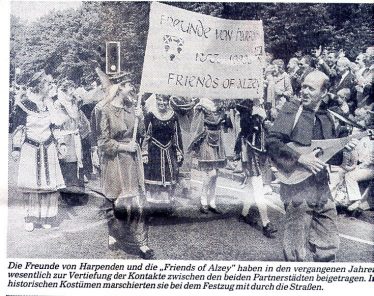 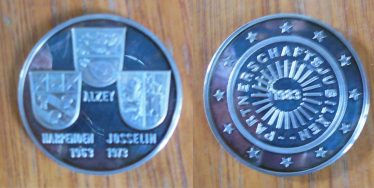 Alzey proudly celebrates its historical roots. In 1973 the town administration commissioned and published a book celebrating 1750 years of Alzey’s formal history, dated from a Roman altar dedicated on 22 November 223 to the nymphs guarding the Alzey waters. In 1977 the town celebrated the granting of its charter dated 1277 and its importance from medieval times, as the administrative centre of a palatinate state, with castle, town and jurisdiction over a wide area of Rheinhessen. During Napoleonic times Alzey was under French rule until 1815.

In the aftermath of the Second World War, when Alzey was liberated by the Americans and then occupied by the French who oversaw administration until 1956, rebuilding bridges with the rest of Europe was immensely important, alongside rebuilding the town’s cultural roots (concerts, museum, new schools, hospital and station, further education, library). This is described in detail by Herbert Ahrens in 1750 Jahre Alzeys, 1973 – not yet translated *.

Willi Bechtolsheimer, who in 1949 was the first elected Bürgermeister, became actively interested in developing twinning links for Alzey and hosted a delegation from Hertfordshire which visited Alzey in 1957 as part of the Hertfordshire and Rheinhessen/Rheinland Pflaz twinning agreement. The first twinnings of Hertfordshire towns had been established between Watford and Mainz (1956), St Albans and Worms (1957), followed by Hitchin with Bingen (1958) and Stevenage with Ingelheim (1963).

Exploratory visits by Harpenden councillors to Alzey in 1961 and Alzey councillors to Harpenden in 1962 led to the signing of the twinning agreement in Alzey on 10 September 1963, by the Chairman of Harpenden Urban District Council, Victor Truss, accompanied by Councillors Keith Hill, John Fryd, Peter Wood and the Clerk to the Council, Donald Best. In his speech, Mr Truss said: “Our generation has lived through more than enough wars and threats of war. We all want to do our best in striving for international understanding, and in helping our children to get to know and understand each other.”

From the outset there was strong emphasis on school exchanges with Gustav Sybertz making contacts particularly in Roundwood Park School (Miss Thompkins) and Manland Secondary School (Mr Bloxham) to arrange many visits of schoolchildren and young people. However, there were critics, no doubt in both towns, who shared the views of Independent Cllr Fred Gingell, who wrote to the Herts Advertiser in May 1963 that it was “wrong to waste ratepayers’ money on establishing the Alzey link”, rather than linking “with an Ally, who fought with us”.

Harpenden and Alzey Hockey Clubs set up exchanges and matches from 1965 onwards, and Harpenden Rovers Football Club met up with Alzey Rot-Weiss FC in 1966. Alzey Rotary Club, founded in 1967, established strong links with Harpenden Rotarians. The Choir from the Nicholai Kirche made visits in 1966 and 1969, and the Lea Singers visited during the 1980s. The Harpenden Society of Winemakers, along with many others from Harpenden have visited Alzey for the annual Winzerfest in September each year, when a new Alzey Wine Queen is crowned. Harpenden Labour Party and Alzey Social Democrats exchanged visits in 1975, 1977 and 1980. From all these links personal friendships developed. A particularly special relationship was formed between Alzey and the National Children’s Home.

When Harpenden Urban District Council was dissolved into St Albans & City District Council in 1974, there was great concern, expressed by the last Chairman of the UDC and first Mayor of the new City & District of St Albans, Cllr Ian Fulton, about any loss of the direct link between Harpenden and Alzey, since St Albans already had its own link with Worms. Harpenden Parish Council (later Town Council) maintained a twinning sub-committee.

Group photo of Friends of Alzey and hosts on an excursion to Worms, August 2013

In 1979 responsibility for expanding contacts between individual and families, rather than organisations, was passed from the sub-committee to the Friends of Alzey (of which the writer was the first secretary). This group has continued to host and organise visits to and from Alzey, and members took part in the celebrations in Alzey for the 50th Jubilee in August 2013, at which the Mayor of Harpenden, Cllr Rosemary Farmer represented the Town Council and people of Harpenden. Direct responsibility for the Alzey-Harpenden partnership has been returned to Harpenden Town Council.

* copies of articles from this book and 700 Jahre Stadt Alzey (1977) can be consulted by arrangement with the writer – please contact us.