Army Hospitals in Harpenden in WW1 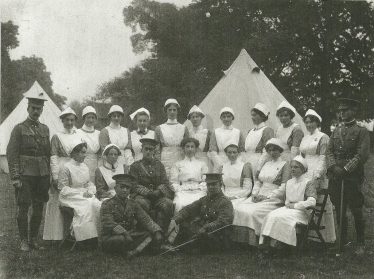 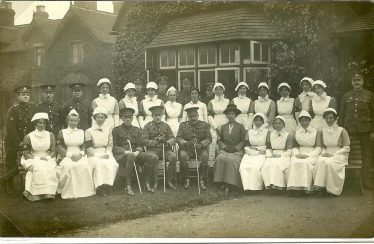 zoom
Officers and VAD staff outside The Institute, 1915
LHS archive 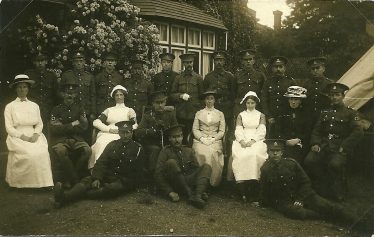 From the article ‘Rosemary Hospital’ by Eric Brandreth in the Society Newsletter number 102, August 2007

On the outbreak of war in August 1914, the Territorial Army was mobilized and units were dispersed to all parts of the country to undergo extensive training before going to France.

Four Battalions (some 4,000 men) of the Notts and Derbyshire Regiment came to Harpenden, and were billeted in houses all over the village.  Tents for a temporary hospital were erected in Rothamsted Park, just inside the gates at Hatching Green.  (There was no hospital in Harpenden at this time: patients went to the West Herts hospital at Hemel Hempstead.)  The Officer Commanding the 1st North Midland Field Ambulance asked for local assistance in nursing the patients.  Several ladies volunteered their services and quickly became officially recognized as a Voluntary Aid Detachment of the St John Ambulance Brigade, with Dr V Kelynack as Commandant.

Although the hospital received most public attention, the Brigade was busy with other forms of training.  During their first year Dr Blake gave two courses of lectures on first aid.  He had 68 students, of whom 54 passed the qualification exam at the end of the course.  Dr Violet Kelynack also gave three courses of lectures on home nursing.  She had 47 student; 42 were successful in the exam.

When cold weather came in October, the hospital was moved into the Golf Clubhouse on the Common.  In February 1915 it transferred to the Institute (now the Friends Meeting House) and remained there until the troops left on 30th July 1915.  During the six months it was open there, the 24 beds were occupied by a total of 331 patients.  It suffered its first death a few days after opening in the Institute: at the end of February a young soldier of the Staffordshire Regiment died of flu.  He was buried in St Nicholas churchyard with full military honours.

There was then a ten week interval until the Lincolnshire and Leicestershire Battalion of the 17th Infantry Brigade arrived in Harpenden together with the 2/2 North Midland Field Ambulance Detachment.  With the hospital closed temporarily some of the nurses transferred to other local hospitals: there were troops all over the county, and several hospitals had been set up for them.  Some nurses went to Wardown Park in Luton, one to Bricket House VAD hospital in St Albans, one to Boxmoor House at Hemel Hempstead, and a couple to the Federated Malay States Auxiliary hospital at Blackmore End.  Some volunteered for service further afield: one went to the Royal Herbert Hospital at Woolwich, two went to the London General Hospital at Chelsea, and after a spell there one was transferred to Malta.

When the new troops arrived Mr Henry Tylston Hodgson, a Director of the Midland Railway, who lived at Welcombe in Southdown Road (undergoing conversion to flats, 2018), offered “Rosemary” in Milton Road to the Officer Commanding rent-free for use as a hospital. (Mr Hodgson  had built “Rosemary” in 1908, to the plans of his architect son, Victor, thinking that his wife might live there after his death, but this was not to be: she died in 1910, eight years before her husband.)  Although it was a smaller house than the Welcome it was much bigger than the Institute, and although they were only given three days’ notice, the ladies of the local Voluntary Aid detachment thoroughly cleaned the house, and installed the equipment which had been used at the Institute and with the support of many gifts and loans of furniture and equipment, had it fully prepared for the reception of the first patients on 21st October 1915.

The hospital was open in three periods: