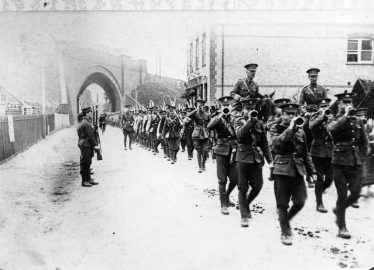 zoom
Marching near the skew bridge 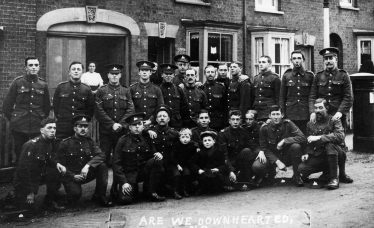 Co-operation with the Military Authorities

When war was declared in August 1914, the Territorial Army was immediately mobilised.  The North Midland Division was allotted Hertfordshire as its training area.  On 21st August, four battalions of the Notts and Derby Regiment (the Sherwood Foresters) arrived in Harpenden.  The Medical Officer of Health, Dr Hugh Fraser describes how they were received:-

As you know, after the mobilisation in August, we had quartered upon us four battalions of the Notts & Derby Regiment (the 5th,6th,7th and 8th Sherwood Foresters) who with the R.A.M.C. numbered about 4,500 men.  This sudden increase of the normal population, from 6,700 to 11,200, more than doubling the number of adults, put at first a somewhat severe strain on the local sanitary resources.  I had a number of interviews with the Senior Military Officers and with the Medical Officers with reference to the supervision of billets, scavenging*, the precautions to be taken to prevent the occurrence and spread of infectious diseases, and generally the steps to be taken to maintain the health of both civil and military population.

For billeting purposes all the empty houses, 23 in number, were taken, and were occupied by a number of men varying from 30 to over 100.  In occupied houses one room on the ground floor was usually selected, preferably with an external door to facilitate access to outside sanitary arrangements.  Three or four men were billeted in a cottage and from six to twelve in the larger rooms in the residential districts.  Overcrowding was not unusual and I made representations on many occasions to the military authorities, as it was my duty to do, but without much success.

The trouble arose from an exaggerated estimate of the capacity of Harpenden for billeting purposes.  When the men arrived they had to be put somewhere; and after all we are at war and cannot grumble at military exigencies.  When the Notts & Derby battalions left after 12 weeks stay, I had hoped that the War Office Circular of October 10th 1914, directing Commanding Officers to communicate in future with, and consult the local Medical Officer of Health before billeting, might enable me to give some suggestion of the number of men who might be satisfactorily billeted here, but no notice has been taken of this requirement of the War Office up to the date of this report.

The need to “abate nuisances”

The Sanitary Inspector was instructed to inspect the billets, examine sanitary appliances, and to take such steps as were necessary to prevent and abate nuisances.  These latter mainly arose from stopped drains – especially in empty houses; from overflowing cesspools; deposits of refuse; and food left lying about in billets.

The inspector was also authorised to provide more horses and carts for the extra scavenging required.  The contractor was furnished with a list of billeted houses where there were closet-pails, and of places where temporary latrines had been provided.  They were emptied and disinfected early each morning.  Dustbins were emptied at least once a week in every case; twice a week where there were eight men; and daily where there were 20 or more.

The Water Supply was ample and the Disposal Works were able to deal easily with the extra amount of sewage delivered.

I had for some time grave anxiety about the possible incidence of disease through flies in such hot summer from accumulation of refuse.  That this was prevented was due to good scavenging, the vigilance of the sanitary police, and of the occupiers of houses who are quite up to date in their knowledge in this respect, and to good fortune.

* Scavenging = refuse disposal by the dustmen