A sketch of George Herring, drawn from newspaper reports in his cuttings books and photo albums, passed to the Society’s archives from the collection of his daughter Betty in 2014. 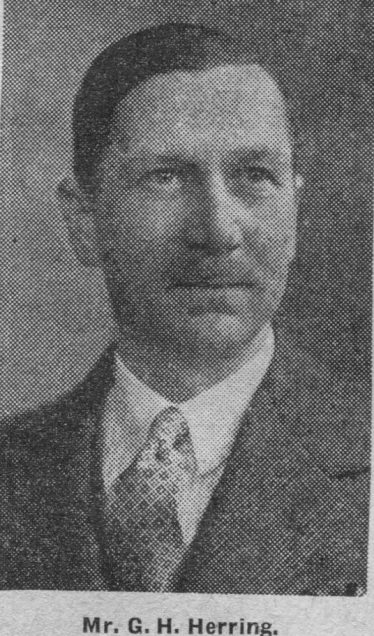 George Howard Herring was the second son of John Herring, who had come from Staffordshire as stud groom to the Hertfordshire Hunt around 1900 and was a founder member of Harpenden Conservative Club. The Herrings lived in Kennel Cottage, Kinsbourne Green. After leaving Luton Higher Grade School, George became articled in the surveying department of the Luton Hoo Estate – then under the ownership of Sir Julius Wernher. He studied at the St Albans School of Art and attended a course of lectures in London. By 1911 he had moved with his parents to Symington Street (now Park Mount) in Harpenden, as recorded in the census and Kelly’s Directory.

He kept two books of newspaper cuttings from around 1910 until his death. The older volume opens with cuttings in May 1910 referring to him as a Lieutenant of the Boys Brigade in Kinsbourne Green, and as Secretary of the Men’s Club at the Wernher Recreation Room at Kinsbourne Green. The next cutting describes a cricket match between Bedfordshire County Constabulary and the Luton Hoo Estate employees in July 1913, when George Herring was ‘not out’ when the Luton Hoo team were declared winners of the match.

On 1 October 1913 George Herring married Miss Nellie Pellant, daughter of the jeweller and clockmaker W Pellant of Harpenden High Street. In February 1914 he was elected a member of the committee of the Hyde Polling District Conservative and Unionist Association (President Mr Harold Wernher).

By 1916 he was a clerk in the Steward’s office on the Luton Hoo Estate, and at this time he started to compile the Roll of Honour of Estate staff who had joined a wide range of regiments from the outbreak of war in 1914. He had also become second officer of the Luton Hoo Private Fire Brigade. 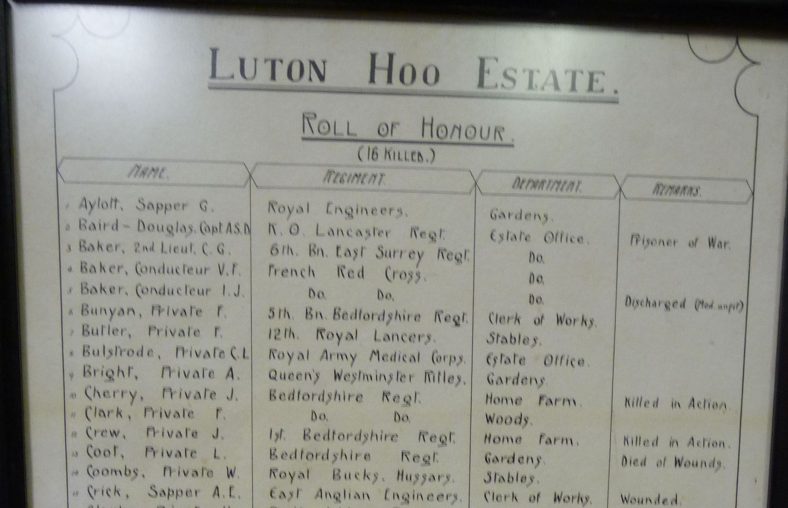 Luton Hoo Roll of Honour, completed by George Herring on his return. Note that he had run out of space. His signature is squeezed in the bottom corner. Credit: G. Ross, January 2015

From 1916 he served as a gunner with the 1st West Riding Battery in France, and was for a period in charge of the arrangements for protection from fire of a large ammunition dump near Béthune. 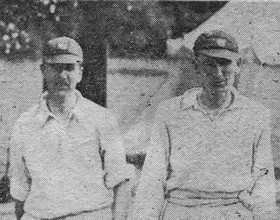 In 1918 he resumed his involvement with the Estate Fire Brigade, serving as its Chief Officer until 1933. From 1921-1934 he was a member of East Hyde Parish Council, and he was also secretary of the Estate Sports club for over 25 years. He remained an honorary member of the Sports Club at the invitation of Lady Ludlow. This press cutting shows him, on the left, leading out the Luton Hoo team to play Luton Police in July 1940.

When George Herring left Luton Hoo to set up in private architectural practice in Harpenden in 1934, he advertised as F.I.A.A. and a Licentiate of the Royal Institute of British Architects. He set up home and his practice at Homeleigh, 21 Milton Road – formerly the home of notorious Count de Voilement (Major Esterhazy) from 1913-1923. 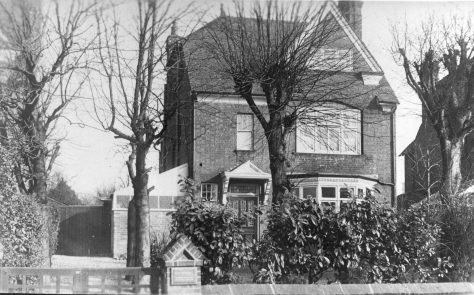 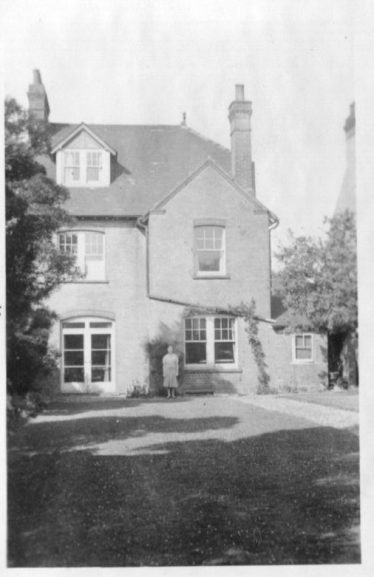 An undated cutting mentions the end of term entertainment at St Dominic’s School (then in Welcombe) with a pianoforte solo ‘brilliantly rendered by Muriel Herring, a pupil of great promise’. Muriel was the elder of two daughters; the younger daughter Betty donated her father’s albums to Harpenden’s archives. 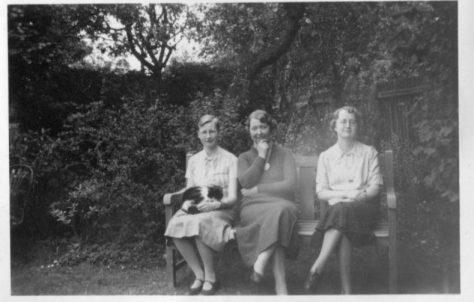 George Herring’s architectural practice benefited from his involvement particularly with the Parish and Methodist churches, and an ongoing interest in the National Children’s Home as their consulting architect and honorary adviser in fire prevention for the 29 branches. He designed a substantial extension to the Printing Works at Highfield Oval in 1937, and a new school at the Congleton branch, opened in 1940.

Active on the Parochial Church Council, Harpenden Preservation Society, Common Golf Club and British Legion, he stood as a candidate in the 1937 Harpenden Urban District Council elections. Though he was apparently not elected a councillor, the HUDC elected him as Chief Officer of Harpenden Fire Brigade in 1937, and from that date he kept a book of newspaper cuttings of all the many snippets and articles covering Harpenden Fire Brigade, starting with the recruitment and training of the auxiliary fire service and a November Black-out weekend in 1938 during the Hertfordshire County ARP exercises, involving more than 100 fire fighters. There were dinners, parades, the launch of The Branch Pipe (journal of the Harpenden brigade), and the story of two evacuee boys raising the alarm and helping to save a baby and her mother (also evacuees from Enfield) from a fire in the attic of 27 Milton Road. In January 1940 there was concern about the number of firemen joining up, and a new recruitment drive for the AFS. 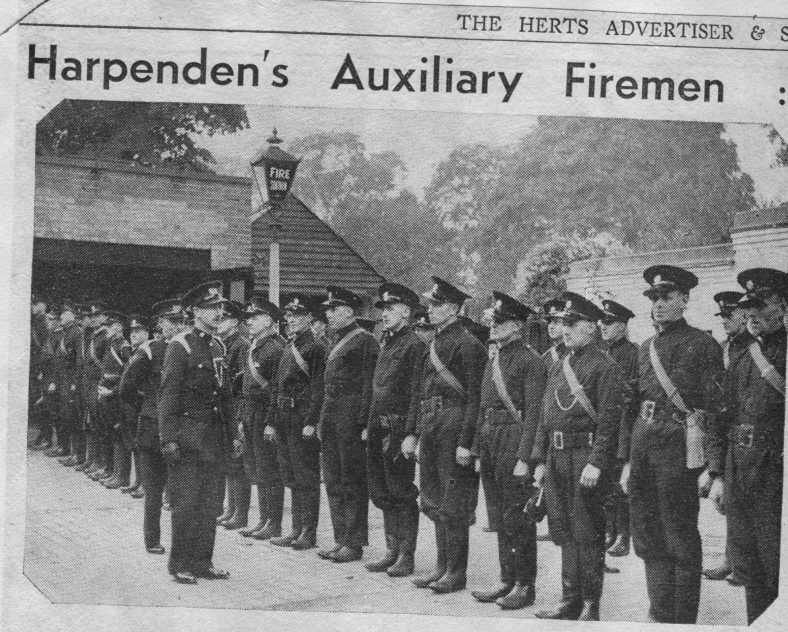 The cuttings give a very detailed insight into fires, social events and personalities up to the reorganisation of fire services under the National Fire Service in October 1941. George Herring took on the command of Harpenden, Berkhamsted and Hemel Hempstead, before being appointed as a Regional Staff Officer in Cambridge in 1944. The cuttings book ends with the report of the denationalisation of the National Fire Service. As a result “the services of Divisional Officer G H Herring … are terminated” as reported in the Harpenden Free Press on 2 April 1948.

Cuttings about his interests and work

George Herring’s more personal cuttings book runs parallel through the war years, and includes his involvement on the sub-committee of the Harpenden and District Preservation Society (under the chairmanship of Ernest Hasseldine) which commissioned the 1937 Coronation commemoration – the Harpenden sign. In August 1937 he had produced plans for a new sacristy at St John’s Church, duly dedicated the following year. In January 1939 he designed a memorial screen for Ben Jarman in St Nicholas church, and also a replacement of the old Roll of Honour in an oak frame in the parish church. Later in 1939 his designs were approved for the replacement of St Mary’s Mission church at Kinsbourne Green. 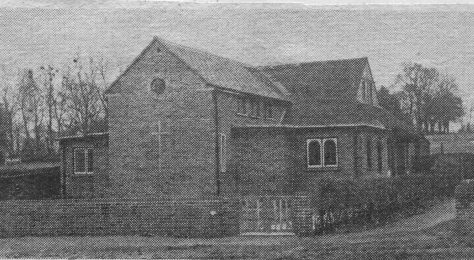 After WWII George Herring presided over a meeting of the Harpenden & District Preservation Society which resolved to change its name to The Harpenden Society, and to see its role as promotion of “the general well-being of the people of Harpenden and District”. In January 1949 new doors for the Parish Church, designed by G H Herring, were dedicated and later that year work started on the demolition of the old Methodist Church at Kinsbourne Green in readiness for his design of an extension to the school hall to be built. Mrs Brigham cut the tape at the dedication of the new chancel in February 1950. In his role as churchwarden, George Herring directed work for the restoration of the tower of St Nicholas church in July 1951, and he designed the 1939-45 war memorial in the church. 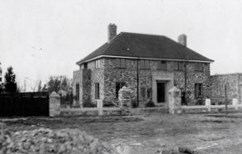 Much of George Herring’s architectural work was in housing and his family albums possibly show houses he had designed around Harpenden and elsewhere. In 1949 his design for six three-bedroomed “modern, urban-type houses built under special licence for agricultural workers” on the new Hilltop estate in Wheathampstead attracted much interest for good layout and amenities. In 1952 he drew up plans for the Batford lido, finally opened in 1954. Not many of these are mentioned in newspaper cuttings, but his photo albums contain a number of otherwise unexplained photos of houses, churches, schools which one may assume were built to his designs. A selection of these are grouped at the end of this page. The relevant pages from the photo albums and the books of cuttings are stored in our archives. 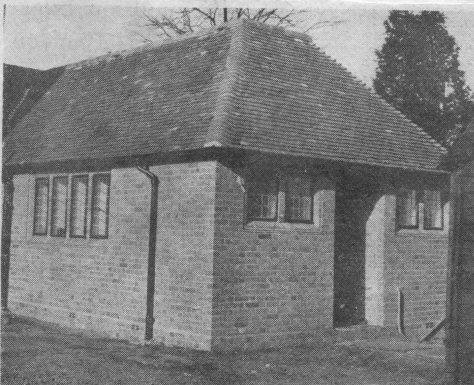 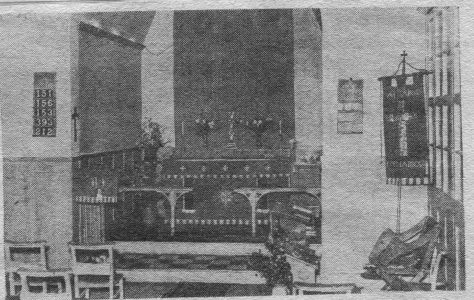 Meanwhile he had designed the new hall for Batford Methodist church and directed the redecoration of St John’s Hall at Southdown. In 1954 Frank O Salisbury performed the opening ceremony for the new primary Sunday school building at Southdown Methodist church. 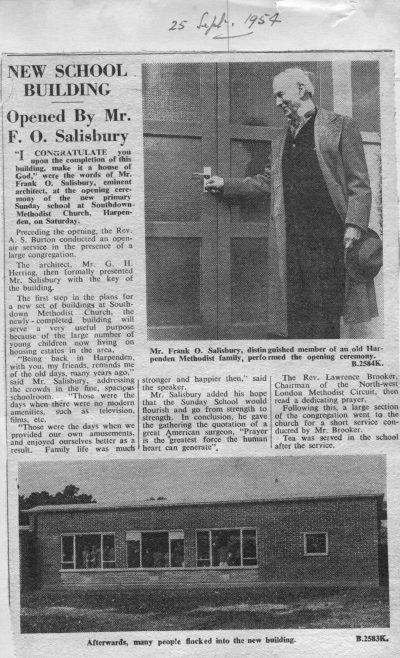 The last cuttings date from 1955, and record his involvement with restoration work at Hexton Church done under his supervision, alongside the report of the funeral of his elder daughter, Muriel Herring LRAM, aged 39, after a few weeks’ illness. Muriel had always lived at home with her parents, and after studying in London under Mr James Ching, was a well-known piano teacher for twenty years, using Mr Ching’s special method. She was described as a gifted teacher of hundreds of Harpenden pupils, “possessing great patience”. Her mother was unable to attend the funeral, and not long after George Herring suffered a heart attack from which he had seemed to recover well. According to the obituary in the Harpenden Free Press, “After attending a committee meeting of the Harpenden Society … where he was elected Chairman, … he said he did not feel well, and died in the early hours” of 18 May 1956.

A selection of family photos, and of buildings, from George Herring’s photo albums. Some correspond with cuttings referring to his architectural commissions: others are interspersed with holiday views, but seem likely to be his record of projects he was involved with. They are arranged in probable date order, according to his notes on pages of the albums. Photos in newspaper cuttings record his work to restore the tower of St Nicholas Parish church. 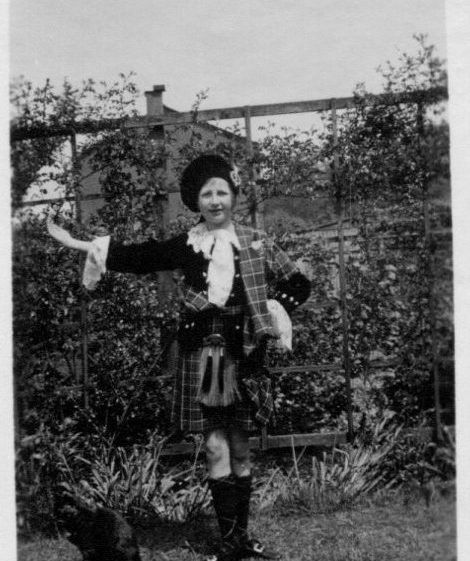 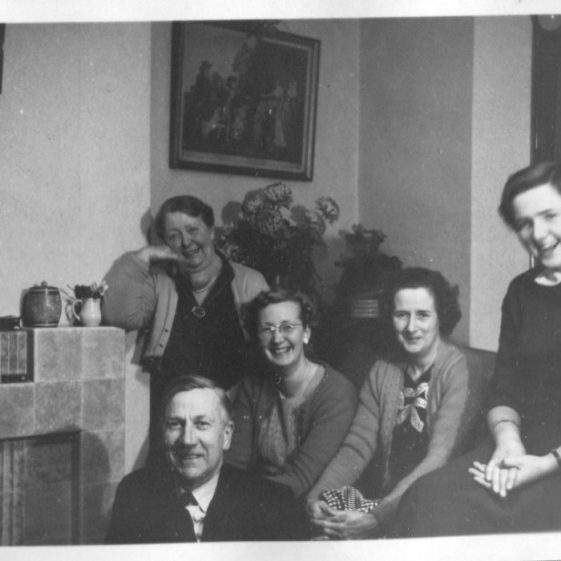 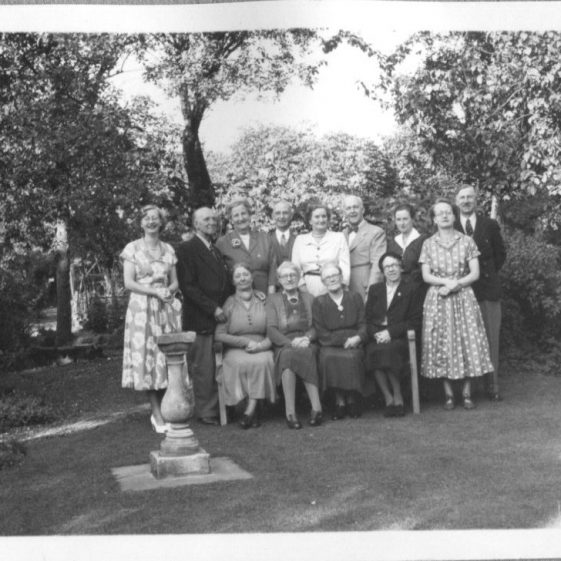 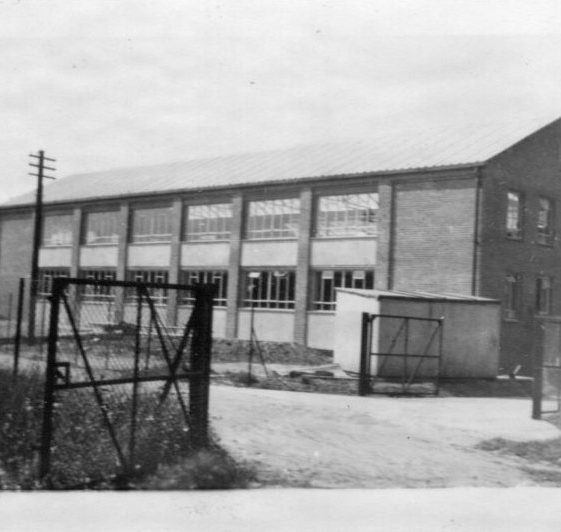 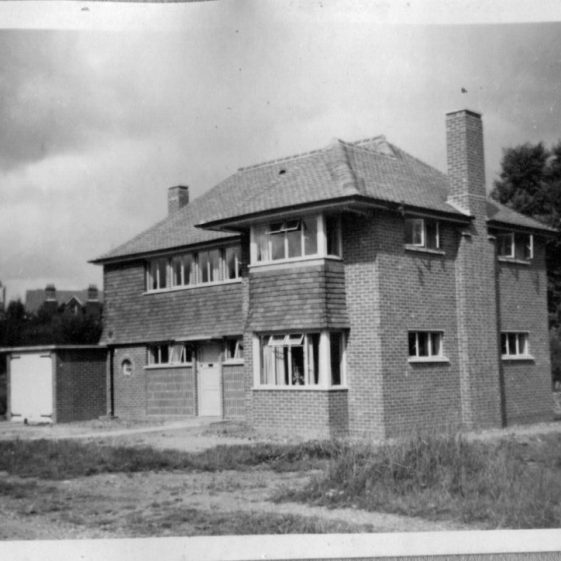 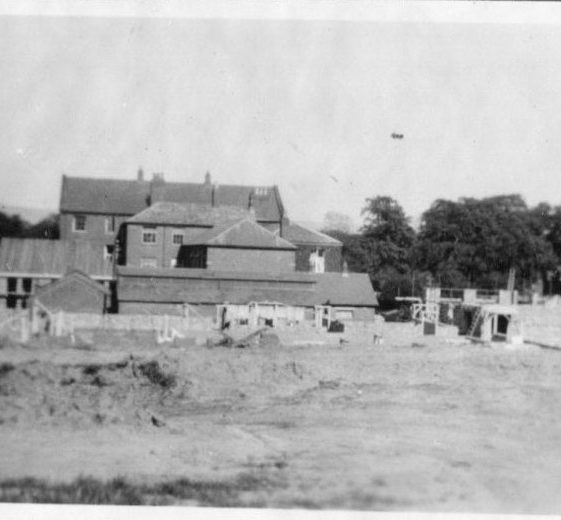 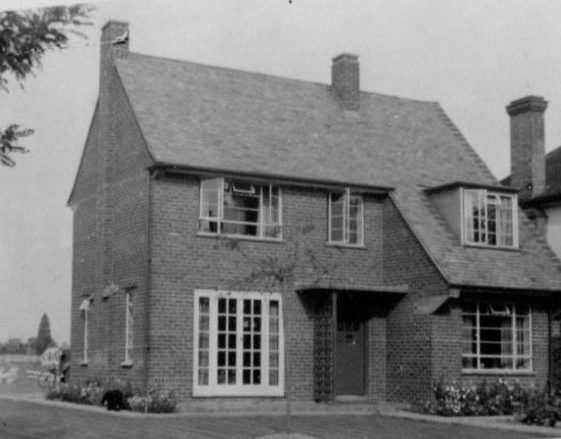 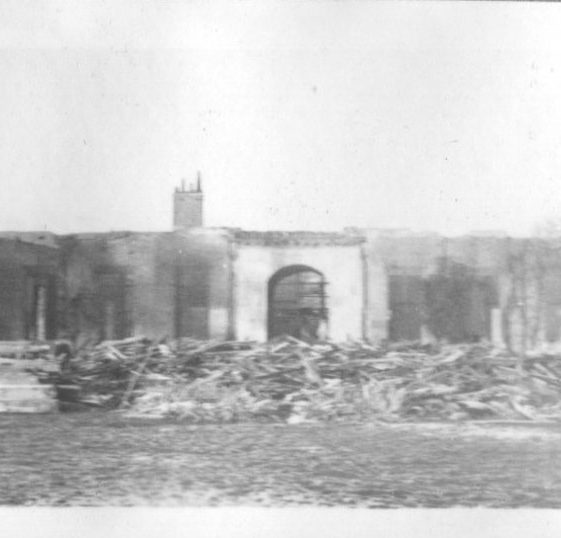 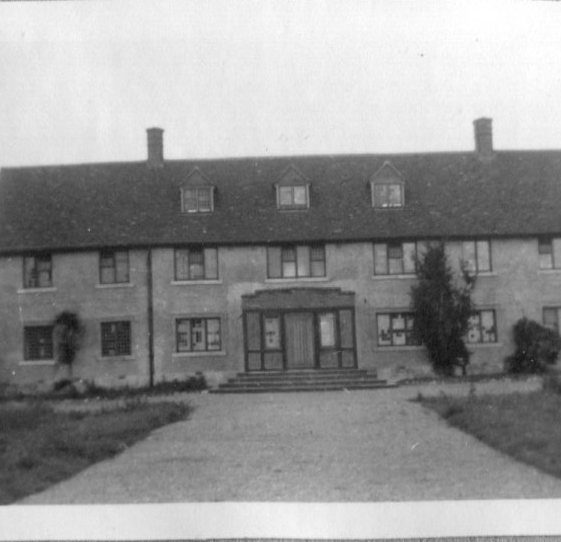 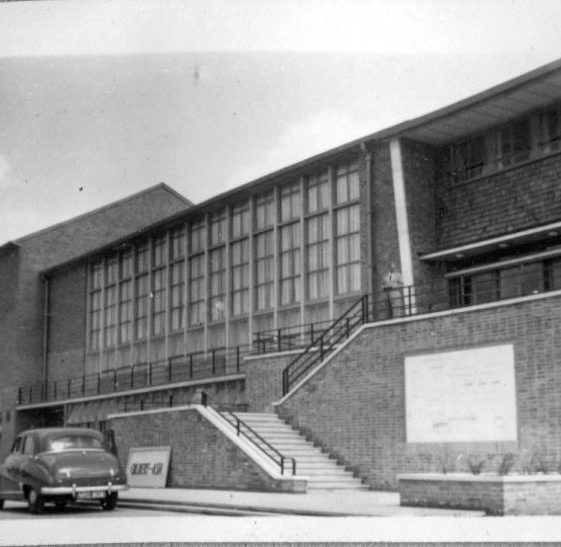 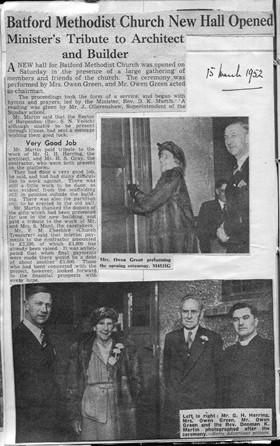 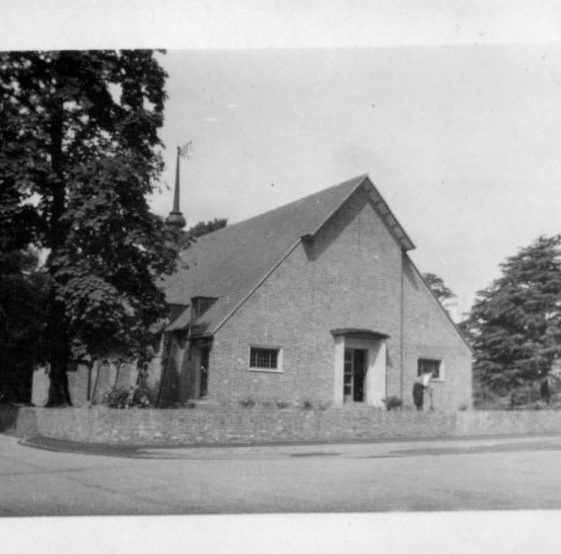 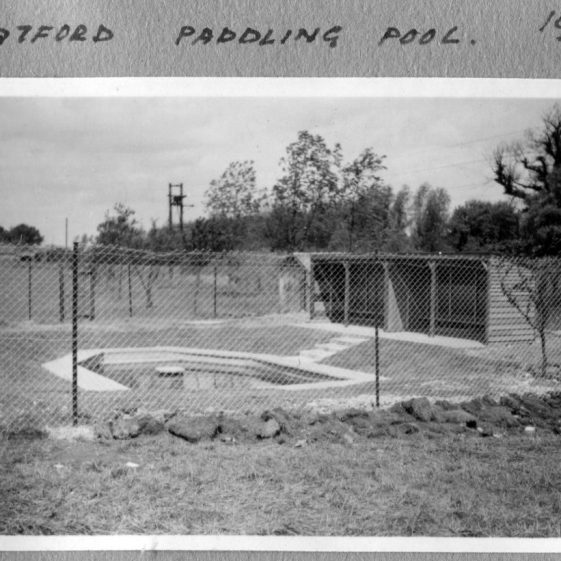 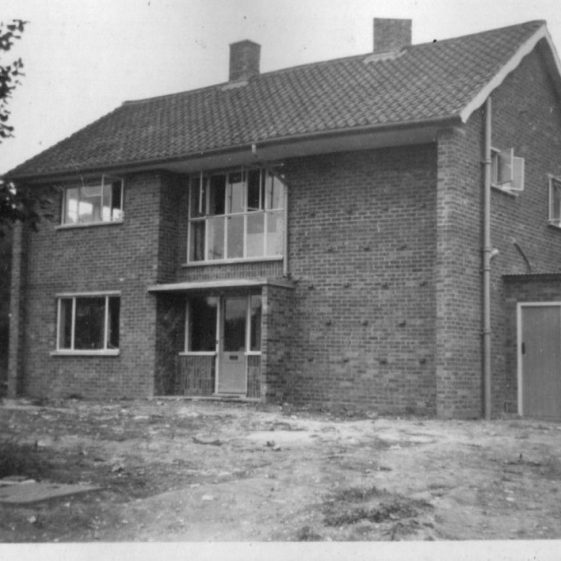 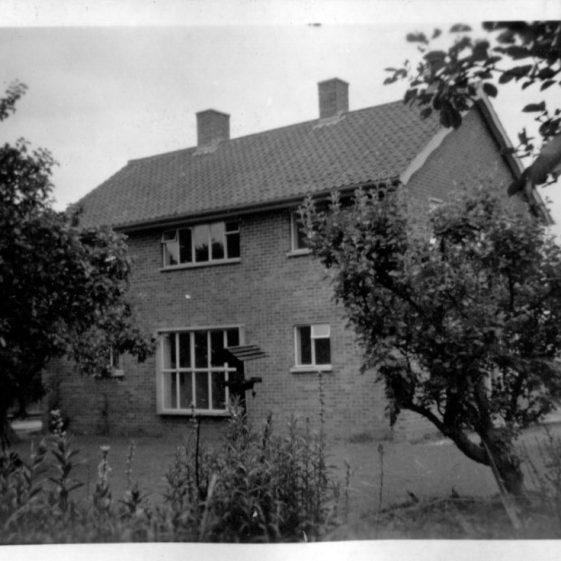 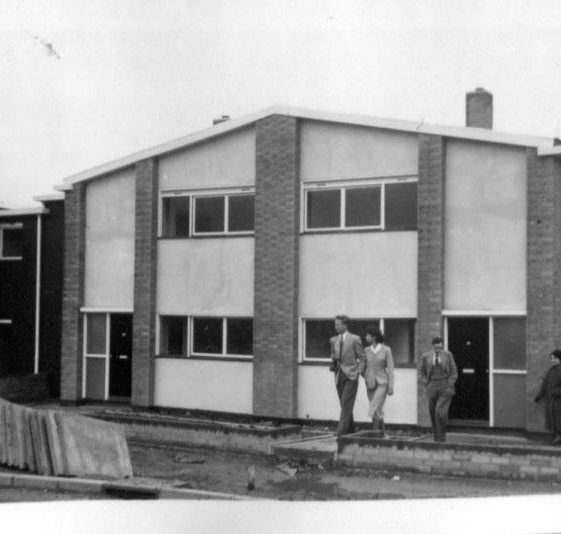 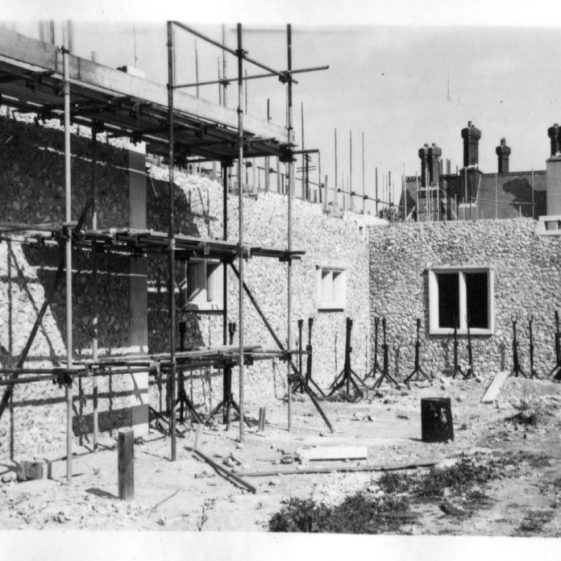 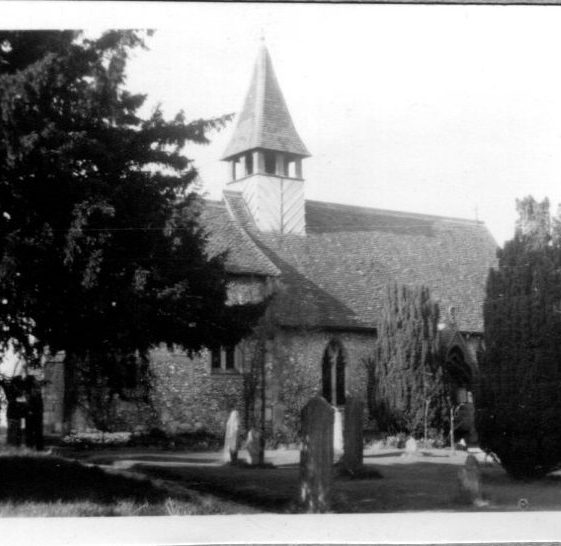