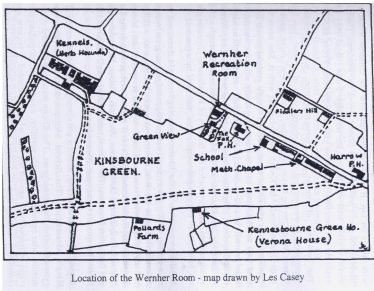 In the opening years of the twentieth century, Kinsbourne Green was a small hamlet, quite detached from Harpenden. There were no buildings along the main road between it and the Old Bell. St Mary’s Church was a dual building: school on weekdays and church on Sundays. The Rector’s wife, Mrs S E Keogh, was trying to hold various church activities, but was handicapped by lack of space for them. A women’s meeting was held in one of the cottages, but conditions were very cramped.

The whole of Kinsbourne Green was part of the Luton Hoo Estate, and at some time Mrs Keogh must have mentioned her problem to Mr Papillon, the Estate manager. On 10th February 1908 she wrote a postcard to him: “I am sorry to bother you so much, but do you think there is any chance of getting the room for Kinsbourne Green? My work is so hindered there – you can think what it is like to be shut up every Monday with all those women in a little room in a cottage – many others wish to join – I have to refuse on account of room. Do see what you can do. I should be so grateful. With kind regards, Sylvia E Keogh.

There is no record of Mr Papillons’s reply, but the two met in April, when Mr Papillon told her that Sir Julius Wernher had agreed to build a Mission Room for Kinsbourne Green. Existing records are patchy, but on 3rd July 1908 Mr Papillon wrote: “I hear from Mr Ernest Nott that the proposed site next to the old thatched barn near Verona House does not quite suit your and the general requirement of the district, and that it is preferred that the Mission Room be erected in the gravel pit field near “The Fox” Public House. Will you kindly let me hear from you on this point, as the building is ready for erection immediately the question of site is definitely settled? It is wished by Sir Julius Wernher that you and Mr Keogh should be perfectly satisfied with the site. The above alternative proposal is equally suitable as far as this Estate is concerned.”

On 25th August Mrs Keogh asked if the room could be ready for 1st October, and on 3rd September she wrote: “The Mission Room is getting on splendidly. I am so pleased with it. The foreman told me he thought I should find it a great convenience to have the outer gate high with spikes on top. If we have the gate low the children would very likely climb over – perhaps throw stones – break the windows. The hedge makes a good wall and if the gate was high I don’t think they could easily do any mischief. I mean the gate from the road. Yours SEK.”

The building, of timber and corrugated iron, was completed in September. It was erected on an oblong strip of ground, just below “Green View”, to the Luton side of the “Green View” drive, quite near to the Luton Road. Mrs Keogh was delighted with it. She wrote to Mr Papillon: “It is a beautiful room – we are deeply grateful to you for the kind way in which you have carried out exactly what we wanted. I do hope you will be able to come [to the opening] – we thought to have the tea at 6 o’clock.” The Room was officially opened, by Lady Wernher, on Saturday, 24th October 1908. Mrs Keogh was very thorough with her arrangements. She persuaded the farmers of Kinsbourne Green to give a tea, to which all the villagers were invited, followed by a concert.

A focus for the community

The following Monday the Mothers’ meeting was held there, and from then on the building was very well used, satisfying a great need for accommodation in the area. There was a men’s club, with a full size billiard table, darts board and card tables. It opened on Monday, Thursday and Friday evenings. Several papers were provided: the Daily express, Daily News, Daily Mirror, Answers, Titbits, Herts Advertiser and the Luton Reporter. The annual subscription was 2 shillings (10p). In the first quarter there were 79 members.

A girls’ club met regularly, as did a girls’ temperance club, called “The King’s Messengers”. The School Mistress, Miss Roobottom, ran a gymnastic club for some years. The Room was so well used that six months after opening a movable partition was erected, hinged so that it could be folded back against the wall when not needed. It became a real community centre, and was used for wedding receptions, concerts, parties and other social occasions.

At one time during the 1910s while the schoolroom at St Mary’s was being redecorated, the school was held in the Wernher Room for a period.

An agreement drawn up in October 1908 stated that “a building has been erected by Sir Julius Wernher for the absolute benefit of the Hamlet of Kinsbourne Green on the following terms:

On 29th September 1909 Mrs Keogh wrote: “Dear Mr Papillon, I enclose order for 1/- which you said I was to send October 1st rent of Wernher Club Room. They are very proud of their room and it is wonderful with all that went on last winter, the Room looks quite fresh, not even a scratch on the paint. Please don’t trouble to acknowledge enclosed. With kind regards, Yours sincerely, Sylvia E Keogh.”

The Kinsbourne Green Women’s Institute was founded in April 1938, and held meetings at the Wernher Room, having been quoted a fee of £2.2.0 for using it 24 times a year, or £3.3.0 for using it 50 times. In January 1940 they were told that the Rector was giving up the Wernher Room and he wondered if the WI would take over responsibility for the room and its upkeep. They did not feel able to do this, and at their meeting on 4th June 1940, it was announced that the building had now been sold, and this would be their last meeting there.

I don’t know who bought the room, or what it was used for. I would be grateful to hear from anyone who has any information or any photographs of the building. There is no photograph in the Society’s collection – and we are making another enquiry of the Luton Hoo Walled Garden Project achives.ed

The Wernher Room was demolished just after the Second World War. The curved hedgeline is still on the 1998 Explorer OS map.