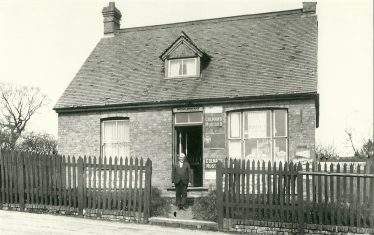 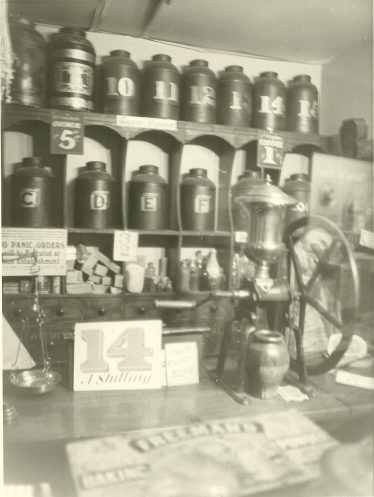 In 1884 Mr J.J. Buck, a cabinet maker from Battersea, took over the Licence of the Railway Inn where he remained for 20 years.

In 1904 Mr Buck bought a plot of land in Station Road (now occupied by numbers 148-154) from Mr Henry Salisbury.  On the lower part of this land he had a one storey General Shop built with living quarters for himself, his wife and his son.

Mr Buck used his skill as a cabinet maker to make the fine mahogony counter for the shop and the range of shelves and drawers behind it.  These fittings, together with some of of the shop equipment and stock are now on display in Luton Museum, as is Mr Buck’s tool chest, complete with his tools.

Mr Buck had hoped to build a two storey shop and house on the other part of his land, but this never got further than the brick-lined cellars, which remained untouched until the whole site was redeveloped.  Mr Buck died in 1908, when the shop was taken over by his son, Mr Arthur Jacob Buck.

The younger Mr Buck was considered to be a delicate boy and it was thought he would benefit by leaving Battersea, so in 1881 he was sent to St Albans, where his mother had grown up, and attended a Boarding School in Alma Road.  His school reports are now in St Albans Museum.  After leaving school Mr Buck had helped his father in The Railway Inn before moving with him to the shop, where he lived until his death.

Earlier, in 1892 Mr Buck became a founder member of the Harpenden Men’s Conservative Association. And in 1912, he became the first Secretary of the newly formed Harpenden Conservative Club and remained in office for 40 years.

Mr Buck was also, for many years, Assistant Secretary of the old Harpenden Horticultural Society, whose annual show in Rothamsted Park on August Bank Holiday until the end of the 1920’s, was one of the local events of the year.  And he was a Joint Secretary of the Harpenden Fanciers Association, whose Whit Monday shows attracted entries from all over the country.

Mr Buck, a little man, always wore a stiff collar and dark suit and, out of doors, except in his garden, a bowler hat.  Every weekday evening when he had closed the shop he went, carrying a little bag for the subscriptions, to the Conservative Club, where his office of Secretary included that of Treasurer.

At certain times Mrs Buck was left to mind the shop.  At General Elections Mr Buck took charge of the Conservative Committee Room, which was set up in an empty shop, or other premises in a central position, from where he organised the canvassing by volunteers of the whole of Harpenden.  He earned the reputation of being the best secretary in the Hemel Hempstead Division and was once described as ‘the most methodical and systematic man in Harpenden’

Every year when the Electoral Register was being revised Mr Buck helped Mr Maffey, the Rating Officer of the Urban District Council, by personally calling at every house to record the names of the voters.

Another job Mr Buck undertook was when the Hertfordshire Hunt Point-to-Point was held at Friars Wash.  He then stood at the gate beyond Annables which led down to the Course, to collect the entrance money from the many race goers, all on foot, who went to the races by that route.

In 1957 Mr and Mrs Buck celebrated their Golden Wedding, and at the end of 1958, they closed the shop, and the interior fittings went to Luton Museum.  Later that year Mrs Buck, who for many years had worked for the family of Mr W. Pellant, died at the age of 79.   Mr Buck, was 92 when he died in 1961.

Mr and Mrs Buck had a son, Arthur, who died in January 1984, and a daughter, Anne, who lived at Maulden near Ampthill, and who helped in the preparation of these notes.