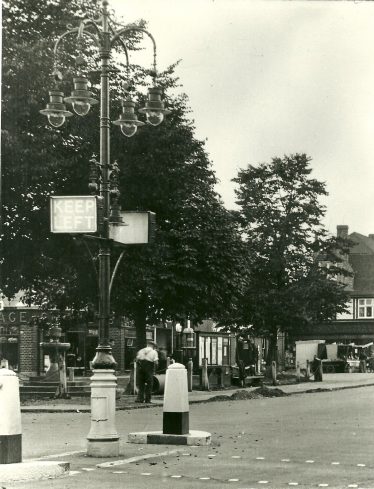 The question of street lighting was raised at a Vestry Meeting in 1887, at which it was resolved to provide 54 oil lamps in the area and these were lit for the first time on Friday 16th September 1887.  Five more were added soon afterwards.  On the 20th December 1901 tenders were sent out for oil lights to be provided for Station Road, the Old Bell area and Coleswood Road.

Harpenden had had a gas works since 1864 but it was not until 1905 that gas lights were installed in the High Street, being lit for the first time on the 1st August – although they were not to be lit on moonlit nights to save money!

By 1930 Harpenden had grown and become a busy place – a new look at lighting was therefore called for.  Gas was again chosen instead of electricity (which had arrived in Harpenden in 1923) when new lights were required for the High Street, Station Road and part of Luton Road.  Demonstration lamps were erected at certain places around the village and those chosen were erected by the War Memorial on Church Green for display.  The contract allowed for whole year lighting of all the lamps, going out at 11.45pm for ordinary ones and 1.30am for late ones, of which there were 27 at selected places in the vilage.

The lamps for the High Street and Station Road were Rochester suspension lamps and in the rest of the district Windsor type were used, with twin inverted burners and directional reflectors.  The posts were painted green and had a cream band around them.  Work had started on installation early in 1933 and the lamps were first lit on Tuesday 8th August that year.

Change came in 1953 when 22 lamps were replaced with 31 electric ones, and the magnificent cast iron columns and their lamps in the High Street were removed at the end of 1957, being replaced by electric lights.  However , when a new light was installed near Batford Mill in November 1954 gas was used.

Starting in July 1960, 238 new lamp-posts were erected around Harpenden to replace 144 gas lamps, the work costing £9,000.  Coldharbour Lane was the last road to keep its gas lamps, and the very last one to disappear was opposite the entrance to Elmfield School in Ambrose Lane, which was replaced in August 1966.  A few found their way into private gardens, and one still remains at the entrance to Aldwickbury School in Wheathampstead Road, long since out of use.

With the demise of gas lamps, also came the disappearance of the lamp-lighter, who would go round his area lighting and putting out lamps.  Story has it that one lamp-lighter was rather fond of alcohol and it was not unknown for lights to stay on all night, although on occasions his friends would accompany him to do the job on his behalf.  Electricity certainly has helped efficiency in all sorts of ways!