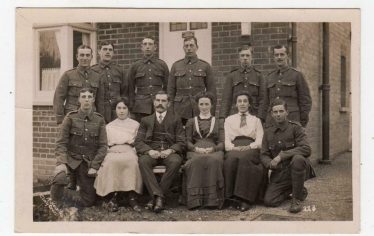 Postcard, with men from Clay Cross in Derbyshire, outside their billet at Brierfield, Harpenden. Credit: ebay advert – February 2020

In February 2020 we were alerted to a photo for sale on eBay, with the address Brierfield, Harpenden. The Postcard depicts a group of eight men in front of a house, presumed to be Brierfield, together with a couple and their two daughters. Printed across the left-hand corner is ‘A Heath, Clay Cross’.

In August 1914, within two or three weeks of the declaration of war, some 4,500 men from the Notts & Derbyshire regiment – Sherwood Foresters – were billeted in Harpenden. Billets had been arranged following a survey of all Harpenden houses, which were allocated men according to the number of rooms deemed to be available. While officers were allocated to the larger houses in the Avenues, the men were generally quartered four to a room in the terraced houses of Bowling Alley (Cravells Road) and in the streets off Luton Road. 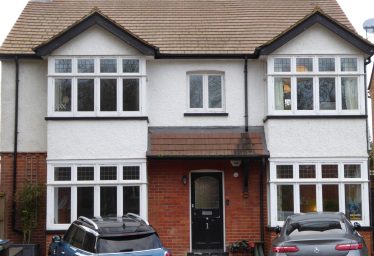 No records of who and where have survived, and only a very few photos of groups of unnamed men, usually in unidentified streets. Searching Kelly’s Directory for ‘Brierfield’ in the last volume to be published in 1913-14 drew a blank, but from the vendor we learnt it was in Hillside Road. By 1922 ‘Brierfield’ indeed appeared in Hillside Road – the only house at the time. After several changes of name, it became 1 Hillside Road. It was the first, and for a while only house to be built, and must have been completed before 1914. Presumably the family had only just moved in, possibly naming their house after a favourite holiday-spot in Cumberland – only to have to share it as they settled in.

A photo of 1 Hillside Road in 2020 shows that the house has been extended with a matching bay-window to the right of the front door. In 1922 Mr Robert Coulthurst was living at Brierfield – perhaps the host for these men? The house changed hands and name by the following year.