The hazards of researching an enquiry

In March 2013 Dor Wilson added the following comment to the ‘Road Names of Harpenden’ :   “I have very fond memories of Harpenden from the 1950s and early 1960s. When very young I stayed with my uncle and aunt somewhere on West Common I think (Myrtle Cottage). This was subsequently bought (again I think) under compulsory purchase when they bought a house in Aley Green (Sunniside). Coming from the north of England I thought I had come to a place called heaven. Does anyone know of a map that would actually have the cottage on it? I am unsure which road it would have been on, but I know we used to walk the dogs across the common with the lights of Harpenden main street in the distance.”

Searches of our archives first pointed to the OS map of 1898, which names Myrtle Cottage on West Common. 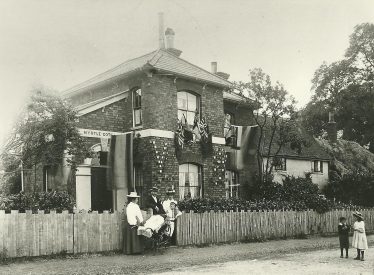 We also hold a photograph of this house decked out in celebration of Queen Victoria’s diamond jubilee in 1897. 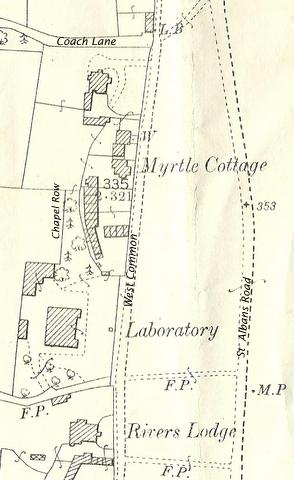 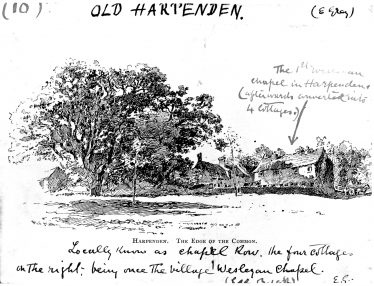 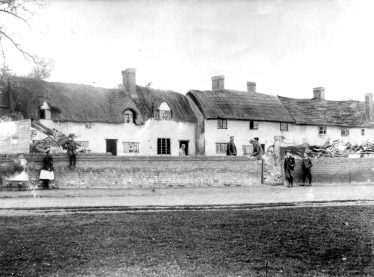 Chapel Row, being demolished in 1902

Chapel Row, shown on the map, was demolished c 1902 and Red Gables, the home and studio of Frank Owen Salisbury was built on the site in 1906.

However, we realised that this Myrtle Cottage had been demolished long before Dor visited Harpenden. 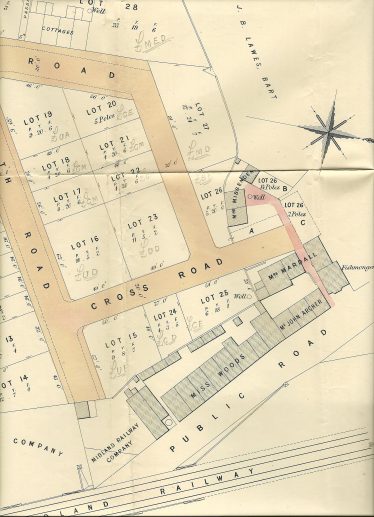 Extract from Plan of Freehold Building land at The Bowling Alley, for sale by auction, 25 June 1884. Not shown are the four cottages on J B Lawes’ land to the NW 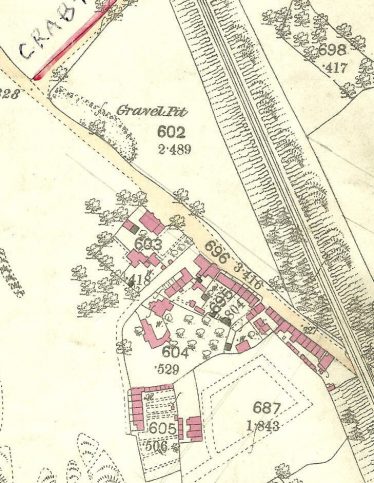 Extract from 1879 OS map, showing a row of four cottages in the centre of the image, facing NW

A search of Kelly’s directories from 1901 to 1966 located Myrtle Cottage, together with Ivy, Rose and Briar cottages in Queen’s Road, behind the Fishmongers Arms pub in Southdown Road and facing the garden of the Queen’s Head pub (now The Skewbridge).

These cottages, which can be seen on the 1879 map, were built on land belonging to Sir John Bennet Lawes, on the edge of the common, and behind them were three cottages belonging to Miss Missenden, as shown on the auction plan when plots for Cross Street and Heath Road were marked out.

Kelly’s Directories show William Corley living in Myrtle Cottage in 1901. By 1907 it was occupied by Arthur Fox, and in 1911 by his widow. During the 1920s Arthur Bandy lived there but by 1930 Ralph Russell had moved in, followed by Mrs Harrison by 1938. 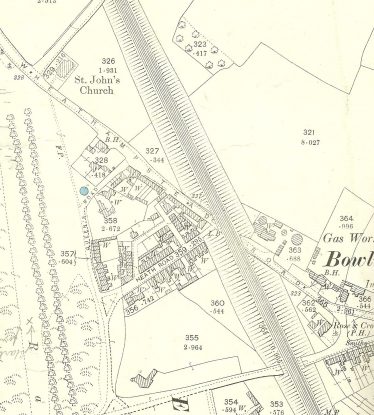 Extract from 1898 OS map, with St John’s ‘paper’ church at the corner of Crabtree Lane, and the 1884 plots of land fully developed, as Heath Road and Cross Street 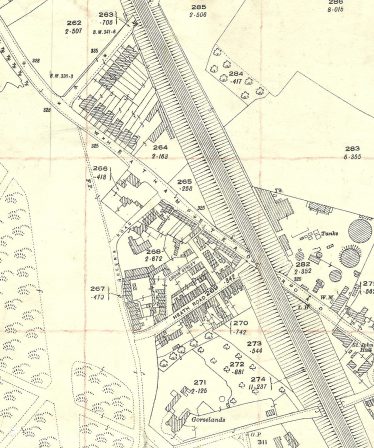 Extract from 1824 OS map, with Jarvis houses at the corner of Crabtree Lane 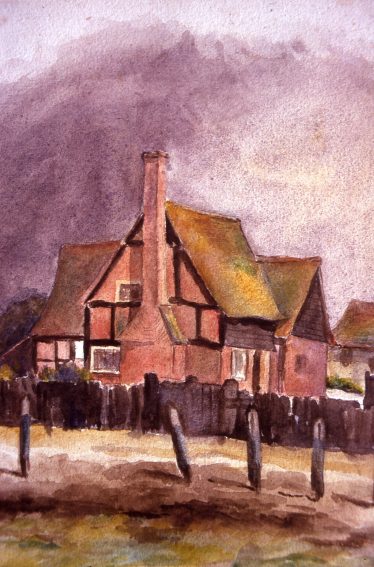 Heath Farm, home of Watler’s Dairy, still still stood at the corner of Queen’s Road till the 1960s

Dor’s uncle Desmond John Brett had moved in by 1949 and they lived in Myrtle Cottage during the 1950s until the cottage was listed as empty in 1960. It was occupied in 1962 by Peter Holtom and in 1964 by Douglas Hawkins, but by 1966 the cottages were no longer listed, and they were demolished and replaced by council-built maisonettes – with a block of flats on the site of Heath Farm – Watler’s dairy.

There was no photo in our archives, but John Seabrook’s recent book, The Best of Times (2012) includes photos of Queen’s Road and Heath Road taken in 1955 by Liz Hossack as part of a study of changing Harpenden. 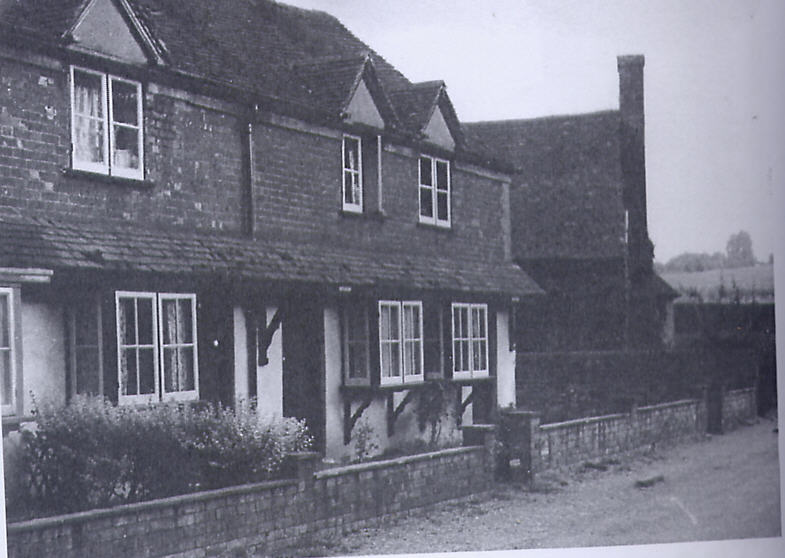 Myrtle Cottage, Queen’s Road, is on the extreme left, with Ivy, Rose and Briar cottages and Heath Farm on the corner 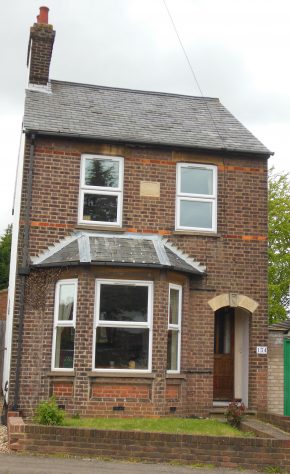 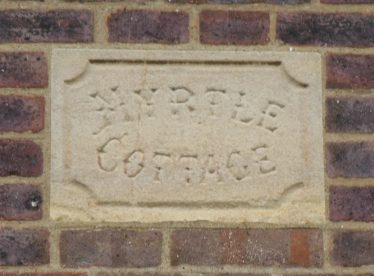 Note: There was another Myrtle Cottage in Harpenden – 134 Station Road, one of a pair built by Mr Theobald for his daughters in 1897. This survives.

A recent search of Kelly’s Directory of 1913/14 (for another project, in January 2014) revealed a Myrtle cottage on the South side of Cornwall Road, and Myrtle Villa in Cowper Road.