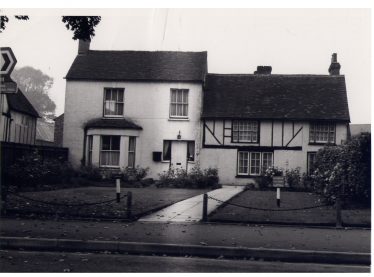 From notes of the WEA/History Society Houses Study Group in the mid 1970s.

This is a two-storey timber-framed building with plastered infill, white-washed brick extensions and tiled, gable roof.

The present frontage to Leyton Road consists of the side wall of a cross-wing, which was part of a late C16 Hall and Cross-wing house, of which the hall also remains, but sub-divided. The house at that time faced SE and stood at right-angles to the road to St Albans. The parlour cross-wing has disappeared. The chimney-stack appears to back onto the former screens passage between the Hall and Service wing. In the C17 the house was extended along the SE side of the hall to fill in the recess behind the cross-wing and provide a porch and staircase.

During the C19 a new brick wing to provide a hall, reception room and staircase was built at the SE end of the cross-wing, now forming part of the frontage to Leyton Road. During the C20 there were brick extensions on the NW end of the cross-wing and the NW side of the Hall. The NW corner of the building is divided off into separate premises with a door on the NW side.

Ownership or tenancy of farms is hard to trace, and comes through references in other records. For instance in militia lists for 1758 and 1762, Edward Lines farmed Yew Tree Farm and was described as a maltster. In 1840, Joseph Freeman farmed 119 acres at Yew Tree Farm and Home Farm, as tenant of the Pym and Packe estate. He also farmed Bowers Farm, the other farm still remaining in Harpenden village centre, together with other pieces of land scattered about Harpenden. Some of these were narrow strips in what had once been medieval common fields – such as at Manland. The Freeman family had been butcher-farmers since the early eighteenth century. By 1851 the tenancy of both Yew Tree and Home Farms passed to Henry Willmott, who farmed 320 acres in 1871 and 200 acres in 1881, indicating the frequent exchanges of land, and the gradual sale of land belonging to the Pym and Packe for new housing development.

Yew Tree Farm survived as a farm until the early C20. Cottages at the corner of Leyton Road and Leyton Green were converted into shops, occupied first by Robert George Willmott (butcher) and Edward S Willmott (Corn and seed mechant). By 1912 Harpenden’s first cinema, The White Palace was built on land behind the cottages, its foyer replacing the corner cottage, as shown in extracts from the 1898 and 1924 ordnance survey maps. 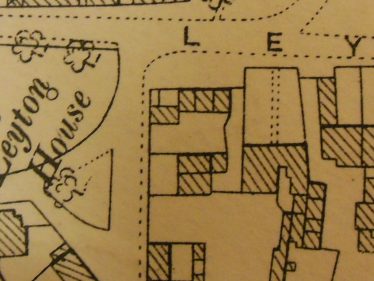 Extract from 1898 map, showing Yew Tree Farm (below E) and cottages on the corner of Leyton Green 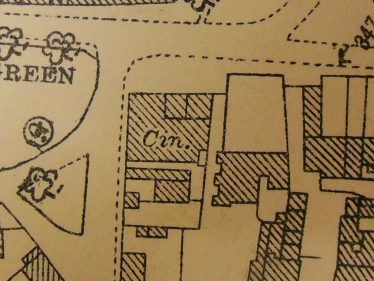 The farmhouse became a private dwelling, where Mrs Willmott (farmer and presumably widow  of Henry) and Mrs Dorman (their widowed daughter), lived until around 1911, when they set up The Laurels Guest House at 17 Leyton Road and Cecil Gilbert Pearce set up a dental practice in Penn Lodge. From Kelly’s directory it is not clear if this might have been part of Yew Tree cottages: Mr Pearce was joined by Arthur Miller and remained there through the 1920s. There is an entrance doorway from the alley between the old farm and the parade of shops, and this could perhaps have been the access to Penn Lodge. It is also not clear if 13 Leyton Road designates Yew Tree Farm: first Mrs Ridley, then Miss Lewis lived here. No.15 was also used to designate the various premises behind Mary Ellens/The Inn on the Green.

However, in 1959 Dr McClean, Dr George Ross and Dr Barber moved their surgery to Yew Tree Farm – 15 Leyton Road – and remained there until the Village Surgery was opened in Amenbury Lane around 2004.

Ed: we look forward to comments and corrections about past inhabitants.