Parish relief, 'outdoor' and 'indoor' - for parishioners and those passing through 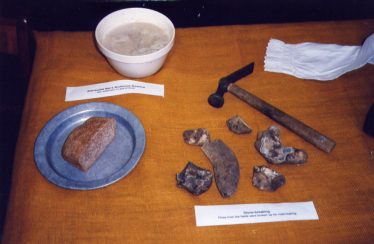 zoom
An able-bodied man's breakfast of 6oz bread and 1.5 pints of gruel - and stones to break
Gavin Ross 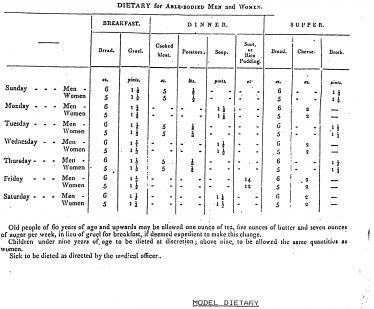 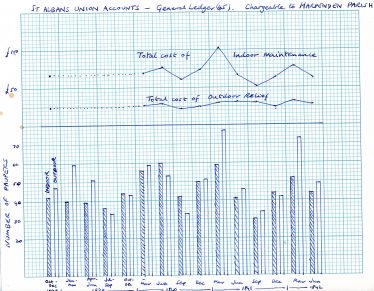 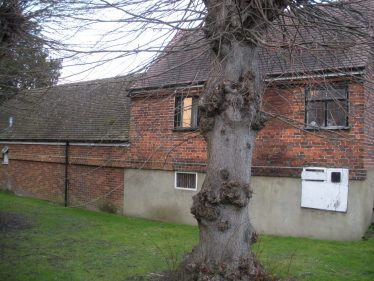 The Act of Settlement in 1662 made it clear that each parish was responsible for maintaining those born in it.

Pushing people over the boundary …

The Harpenden Overseers of the Poor accounts include two entries, in 1708 and 1710, for “the charges with a great Belled (bellied) woman of 3 shillings and 5 shilling & 6 pence respectively” – almost certainly payments for dumping a pregnant woman in another parish just before the child was born.  The plight of one poor woman passing through the parish is detailed in the accounts for 2 April 1743:

*  Pd James Cheworth for Eating and Drinking and for Lodging of a poor woman being in a very poor condition taken up on the Kings Highway: 2s 6d
*  Pd Elizabeth Halsey for sitting up with the Woman all Night and for nurseing of her: 1 shilling
*  Pd the same Woman more for Reliefe and to pass her away (ie see her over the parish boundary) : 1s.6d.”

…or just helping them on their way

The Harpenden Parish Constables’ Accounts also reveal relief paid to others passing through the parish:

One wonders what battle or action they were coming from.  Were they stragglers from an army, making their way back to their home parishes?

“1719 – Nov 19th pd to a poor Woman having a Child with her to pay for her lodging and relief: 6 pence
Dec 6th  pd for Lodging a Great bellyd Woman, 1 night and relief for her: 8 pence
Dec 13th pd to 3 poor Lame Seafaring people for relief: 6 pence”

1735 pd Poor Turkey Slaves that Came with a pass and had suffered much some having their tongues Cut out and Some being burnt and so forth : 1 shilling 6 pence.

And where were they coming from and going to?

In 1691 and 1694 the accounts of the Harpenden Overseers of the Poor record that red cloth was bought for making badges to mark the local paupers.  In the 1690s regular payments of from two shillings to 8 shillings a month were made to about 20 people, mostly widows and old people.  Casual unemployment was met by payments from the poor rate, of which there were 111 in Harpenden in 1674-5.  Nursing and funerals of parish paupers were paid for.

Food was bought for the poor out of the rates: Mary Smith seems to have been the chief source of supplies in the early eighteenth century.  In 1712 “in the time of the smale poxs” she was paid £2 10s 4¾d for goods including bacon, biscuits, butter, cheese, sugar and treacle, as well as candles, soap, starch and blue, and thread and pins, while aniseed water and caraway comforts, hops and malt must have given their recipients some pleasure.  The poor for whom the parish was willing to accept responsibility were quite well provided for.  However in 1752 Harpenden Vestry Minutes record that it was resolved “a Parish Brand [to be] made for to mark those whom the Parishioners think fit”.

The first mention is in an account of 1714 when 2s. 1d was spent on repairing the windows of “Harden Town House for the Poor”.  In 1774 six cottages each with one room up and one room down were “new Build” on the east side of the Churchyard: the date is still partly visible on a portion of the building that remains.  They were managed by parish officials (Churchwardens and Overseers of the Poor).

The General Workhouse Act of 1723 encouraged the transformation of almshouses into workhouses.  However in Harpenden it seems the two institutions co-existed.  The first mention of a workhouse in Harpenden is in the Vestry minutes in 1752, but a new account book opened with the words “the workhouse began May 30th 1756”.  Able-bodied women’s work  included carding and spinning wool and sewing.  Women also “went awashing” and worked in the harvest fields.  Able-bodied men who became dependent on the parish were set to work digging gravel or chalk on the farms and stacking ‘tree-docks’ and ‘brown roots’ for fuel.

It continued in use until local workhouses were closed and transferred to “The Union” after the 1834 Act.  The buildings were pulled down in the 1860s when the National School (St Nicholas School)was rebuilt.

The 1834 Act provided for the abolition of Outdoor Relief – benefits were to be paid only to paupers in the workhouse, rather than allowing people to live in their own homes.  The status of the able-bodied pauper was to be worse than that of the lowest-paid labourer.  Parishes were grouped into Unions – Harpenden inmates were transferred to St Albans, where a stricter regime was imposed: husbands were separated from wives, parents from children.  Of the 18 Guardians, three were to be elected from Harpenden Parish.  In April 1849 Robert Sibley and Thomas Farr were elected.  In April 1851 only Thomas Farr was elected from Harpenden – the other two nominees refused to serve.  Perhaps they were uncomfortable about the harsher working requirements.

Information from The Age of Independence, & The Old Order Changeth,  Vol 3 & 5 of the History of Wheathampstead & Harpenden, 1978, 1991 – see the Society’s publications