You are here: HomenextHarpenden HistorynextPeoplenextNotable or notorious folk OR Colourful charactersnextPercy English - Commander in Care

This article first appeared in Hertfordshire Countryside in 1990. Illustrations have been scanned from an album about the Harpenden Brigade, donated to the Society in 2011 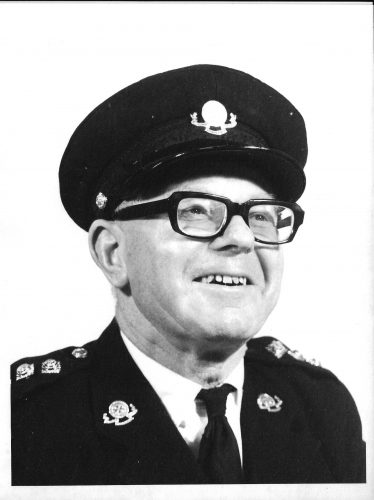 I saw him, standing there on that bright, November morning on the perimeter of the crowd gathered around the memorial on Church Green, erect and still as any guardsman, his mind occupied with thoughts of those who died in the two world wars. His eyes never strayed from the scene before him but as the gun signalled the end of the two minutes’ silence he released his grip on the wheelchair in front of him and his hand rested momentarily on his wife’s shoulder to reassure her. Somehow, in those few seconds, those simple actions had symbolised a lifetime of caring and dedication to helping others. Hundreds of people over the years will have known gratitude that he was there when they needed him, and now the girl he married 51 years ago, who has always supported him so loyally, is profoundly handicapped herself and totally dependent on the love and care he so willingly bestows upon her. 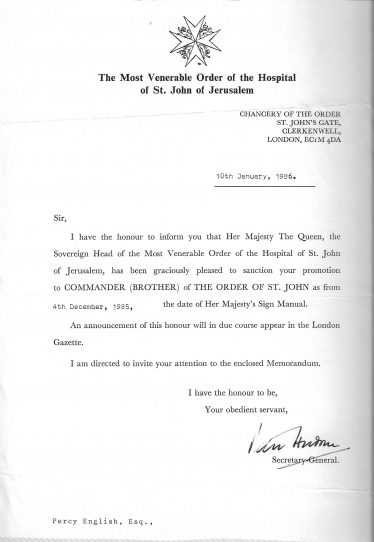 Who is this man? His name is Percy English, on whom “the Queen saw fit to grant the dignity of a Commander of the Most Venerable Order of St. John of Jerusalem”, the investiture ceremony for which was performed by Earl Cathcart on 15th May 1986 after 36 years of service with the Brigade and ten years serving on the County Pool after his retirement, years during which Percy’s work was to benefit his local community and that of many outlying districts, including London on state occasions.

In 1938 , when rumours of war were rife, Percy became deeply involved with the Civil Defence along with other voluntary groups who were gradually forming a nucleus of services, preparing themselves, should it come to the worst, to protect Harpenden and its people from the enemy. They all shared their headquarters at the Old Public Hall by the Fire Station – the Civil Defence, the Ambulance Service, the Local Defence volunteers, later to become known as the Home Guard. They divided into groups as best they could in separate rooms, but eventually the old hall could  accommodate them no longer. The story goes that a Home Guard rifle accidentally went off and shot a hole in the ceiling! So arrangements were made for individual venues for each group, some even making use of air raid shelters.

When war was declared, training began in earnest – exercises and manoeuvres for the Home Guard and Civil Defence with the Ambulance Service in attendance, their ambulance donated by the Canadian Government, especially well equipped and suited for rough terrain, and so well sprung that patients had to be held down on occasions, merely to keep them on their stretchers!

Percy’s enthusiasm for First Aid and assisting others in distress led him to enrol on a course run by the St John Ambulance Brigade and to become a member. Thus began a career during which, in May 1963 he became a Serving Brother, in 1974 a Serving Officer, later a Commander and as recently as 1989 he received an Order of Merit from the Harpenden Town Council for his services to the community.

Soon after joining the Brigade, however, he signed up for active service, requesting RAF Medical Corps or Royal Navy Sick Berth. Alas, when his papers arrived, he discovered he was destined for the Royal Artillery. Angry and disappointed, he reported for duty, but shortly afterwards during unarmed combat exercises, he was injured and admitted to hospital for a spell where he made good use of his First Aid training helping with other patients whenever he was able. In the skilled hands of a serving Harley Street specialist, he recovered and rejoined the ranks of the fit, and one day, answering a call for anyone with knowledge of First Aid he found himself teaching and training officers – with no extra pay! Always a good listener and ready to give help where he could, he gave encouragement to one of his charges, disappointed and disconsolate, much as he had been himself. “Make the best of it”, he urged him. “What’s the point of dwelling on something that can’t be changed?” The young 2nd Lieutenant took his advice and later, when he became an Adjutant, took Percy with him as batman, and, no doubt, unofficially adviser and friend, for the duration of the war. 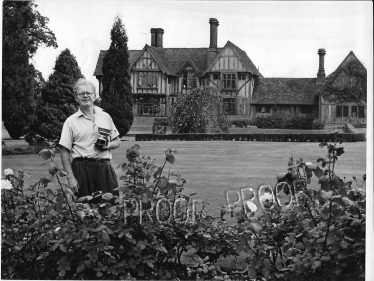 When the time came for de-mob, Percy returned to his wife, Flo’, and Harpenden, but rather than go back to his old printing job, he looked for one that kept him in the great outdoors.  He found the one he was seeking at Rothamsted Manor, and later at Flowton Priory, the beautiful, Tudor mansion on West Common with its warm red bricks, weathered beams and tall chimneys, basking in mellow tranquility in its lovely gardens. Though Colonel Johnson, its owner at that time, has gone now, Percy still cares for his beloved Priory, and it is said, he was part of the bargain when the house was sold. “Buy my house”, the Colonel said, “Buy my gardener with it!”

So having wasted no time in rejoining the ranks of the Brigade, the Priory saw many a parade and many a salute was taken in these splendid surroundings, all with the Colonel’s blessing.

Involved in many State occasions

Over the years, Percy has been in charge of his unit at many, many events, from State occasions to school fetes. As day dawned for the coronation, Prince Charles’ and Princess Diana’s wedding, for Mr Churchill’s funeral, and like occasions, Percy and his crew could be found in position and already on duty. Over-exposure at 4.30 a.m. is not uncommon and he looked after many of the enthusiastic, early arrivals spending the night in the open in the quest for a good view of what was happening. During the night before Mr. Churchill’s body was carried through the streets of London, Percy expressed a wish that he and some of his crew would like to see the lying in state, whereupon Mr. Derek Fenton, then Chief of London St. John Brigade made arrangements to grant their request. Percy was one of the last and found himself standing quietly beside Mr & Mrs Christopher Soames, with a feeling of privilege – part of the extended ‘national’ family, there to pay his respects to this great statesman. He recalls the excitement surrounding the coronation which even the drenching rain could not dampen; the joy, happiness and goodwill at Princes Charles’ wedding; and the sombre hush for Mr. Churchill – hard work, and extremely long days, but experiences never to be forgotten. 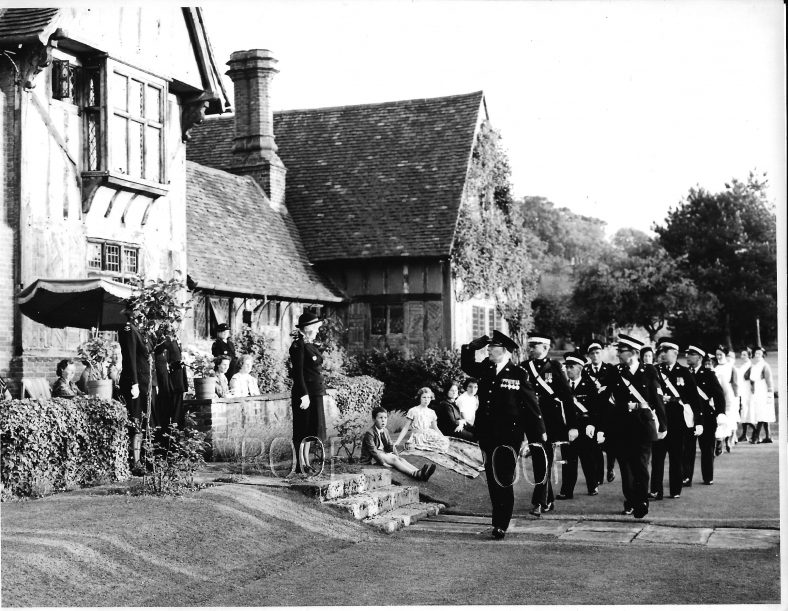 Nearer home, there have been Hertfordshire Shows, where disorientated cattle have suddenly trampled the unwary, startled horses have kicked out, Gymkhanas in mid-summer with heatstroke, tumbles and lost children, sports meetings, with twisted ankles, torn muscles and exhaustion, and at any time the shock and distress of a heart attack. Then, of course, rugby matches, with broken limbs, concussion and once a fractured spine, a situation which could have spelt disaster for this patient, but for Percy and his colleagues, who were afterwards commended for their prompt and expert action. He led his crews with cheerful, but reassuring authority from the critical to the inevitable, “Where’s the ladies?”

Ever a ‘helping hand’

Beyond, his ‘public’ appearances, however, Percy has always been around, as many, many people know, when help was sought for the sick or the distressed. Always ready with a helping hand, whether it be the need for transport, equipment or just understanding and encouragement. He recalls a frantic summons as he was watching a football match (off duty) one Good Friday. Someone needed to be taken to Moorfields right away. Percy didn’t hesitate, and an immediate operation on arrival saved the patient’s sight. 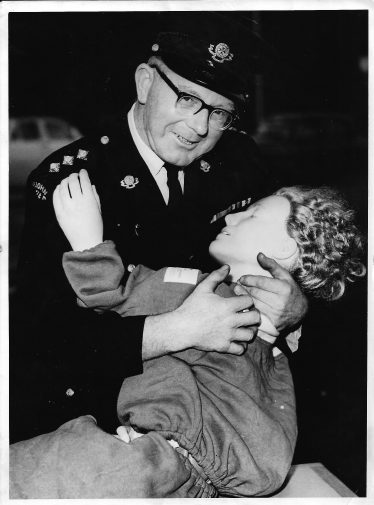 Though always prepared for the unexpected, there was a lighter side to duties too. The long ‘away day’ with 400 adults and children in Liverpool, back to Sheffield, across country to Norwich and on to Harwich was all good fun. Railway enthusiasts all, pulled by the Thompson B1 Class engine. The weekly swimming sessions with physically handicapped children were cheerful trips too. Even the rescue of a wedding cake Geoff Ackroyd, Master Baker, had made for Prince Charles’ wedding. Dismayed to find  he couldn’t get it down a flight of stairs, who should he call but Percy? A stretcher party was hastily brought into action and the cake was successfully transported with all the care afforded to the most fragile patient.

It was rewarding to Percy to escort the elderly and disabled on Christmas shopping trips, group holidays and special services and events at St. Albans Abbey; on one occasion carrying the then disabled Bishop of Bedford, Bishop Wood, bodily into the Abbey so that he could join his fellow churchmen where the Queen was present for the Maundy Money ceremony.

The list is endless, and it records only those occasions the community have been allowed to witness. Percy has quietly gone about over the years, answering calls of distress without fame, and certainly without fortune, though he will be the first to claim that his life has been rich with friendship and fulfilment of purpose and usefulness. He certainly has no regrets, and even today, totally occupied as he is with caring for Flo, he still takes time to stand with the rest of us to remember, and think of those who made the supreme sacrifice.