Moved to a historic new home 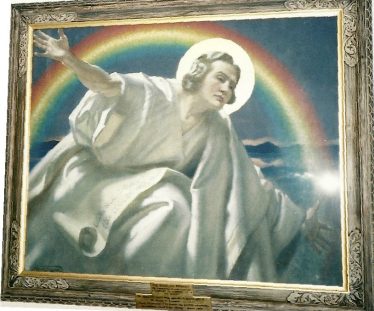 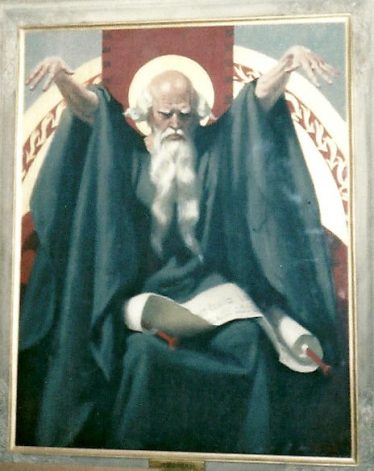 From The High Street News, the newsletter of the Methodist Church, High Street, Harpenden, (issue 100, April 2013) and reproduced with the permission of the Editor.

When High Street Methodist Church was last redecorated, four large oil paintings, in their ornate gilt frames, were removed and put into the caretaker’s store room. There they remained for several years, gathering dust. Three of the paintings depicted the prophets; Isaiah, the Nameless Prophet, The Second Isaiah and Jeremiah. They were painted in a style that is not popular today. Some people thought them rather frightening images! The fourth painting depicted Eli and Samuel.

Few people were aware that they were the work of Frank O. Salisbury (1874-1962) who had strong links with Harpenden. He was born in the town and is buried in St. Nicholas churchyard. He had a particularly close link with High Street church, having designed the stained glass windows in the church. The paintings are thus part of our history but there was little enthusiasm for re-hanging them on our premises. There was a real danger that the pictures would be damaged, and their condition deteriorate, unless a suitable home could be found.

After considering several options the Church Council decided in June 2012 that the Church should retain ownership of the four paintings, but that a location should be found where they would be properly cared for, and put on display rather than kept in storage. Several alternative locations were explored and it was eventually determined  that they could be relocated to the medieval buildings of the Abbey Gateway in St Albans via a formal agreement with St Albans School. The paintings were moved to the school in September 2012. I think Frank Salisbury, who had a great sense of history, would be pleased that his paintings are to hang in such an historic setting.