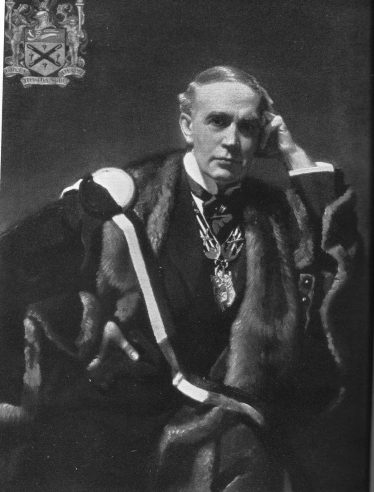 Frank Salisbury completed 32 windows during his lifetime, but made submissions for many more. This work ran alongside his highly successful career as a portrait painter of the great and the good, about which Nigel McMurray spoke in 2012. Stained glass design was his favourite art form.

Frank had learned the skills of stained glass design and manufacture when apprenticed for five years from 1889 to his elder brother Henry James Salisbury, ‘Artist in Stained Glass’, at 50 Alma Road, St Albans.He would have learned about the making of coloured glass, the firing of painted details onto glass, the fitting of glass into H-shaped leading, precision-cutting, fitting to glazing bars and the use of silver nitrate on the back which, when fired, produced golden glass. And he would have learned about the preparation of scaled designs or cartoons, showing the colours and lead lines, for presentation to the client. During this period he spent two years at the Hatherley School of Fine Arts, with fees paid by his brother but deducted from his apprenticeship pay. From the Hatherley School he won a scholarship to study for five years at the Royal Academy School. 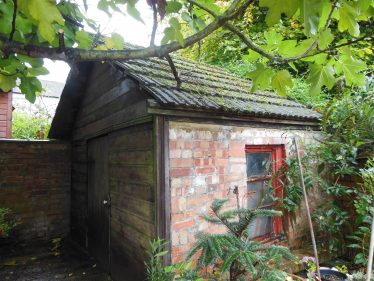 Brick workshop at the rear of Henry Salisbury’s business at 50 Alma Road, St Albans. The garden is full of fragments of stained glass.

Henry James Salisbury (known as Henry professionally and as James in the family) was traditional in his designs, a number of which can be seen in the St Albans area. He designed The Last Supper at Wesley’s Chapel in London. In 1898 he made his brothers Frank, Eustace and his brother-in-law Lionel Davis partners in Salisbury Brothers and Davis. He purchased coloured glass from James Pavel at Whitefriars and also had glass made by fellow Methodists, Chance Brothers in Smethwick.

It is presumed that Frank’s designs were executed at 50 Alma Road, St Albans until his brother’s death in 1916. After that he used Hawes and Harris in Leyton Road, Harpenden. Cecil Hawes was his mother’s (younger?) brother (or his cousin? – he died in c.1940, Susan Hawes had married Henry Salisbury in 1863). George Harris cut glass to fit the jigsaw of leading. Cecil Hawes did much of the painting on glass, assisted by Geoffrey Harper of Little Gables, Leyton Road (4 High Street, behind The George).

A window on the staircase in Red Gables, Leyton Road, Frank Salisbury’s home and studio from 1907 to 1913, was designed to showcase his skills. It contains characteristic heraldry, including the Royal Arms, and emphasis on the Protestant work ethic – faith, family and hard work – and the honest labour of the stonemason. Frank and his brother Henry James were both Freemasons.

Nigel illustrated his talk with slides of Frank’s designs, many of which incorporated beautiful angels with wings, cherubic faces, Masonic symbols and mandorlas. In stained glass design he could let his imagination run riot, in contrast to the precision and realism of his portraiture and the set-piece royal pageants, with every garment, architectural feature and face a perfect photographic image.

Significant works include the Salisbury Chapel at Sarum Chase in memory of his wife who died in 1951, the Methodist Training College, east and west windows in Highfield Oval Chapel, Harpenden (the war-memorial and St Christopher windows), Harpenden High Street Methodist Church (the east-end Teaching window and the west end memorial to Leslie Burgin MP), St John’s, Palmers Green, St George in Tintagel, the Shield of George Chetland in the College of Heralds, and a window echoing the Highfield Oval St Christopher window for the Methodist Mission for Untouchables at Medak in Bangalore.

Frank Salisbury was elected Master of the Worshipful Company of Glaziers in 1934. He painted a self-portrait as Master Glazier.