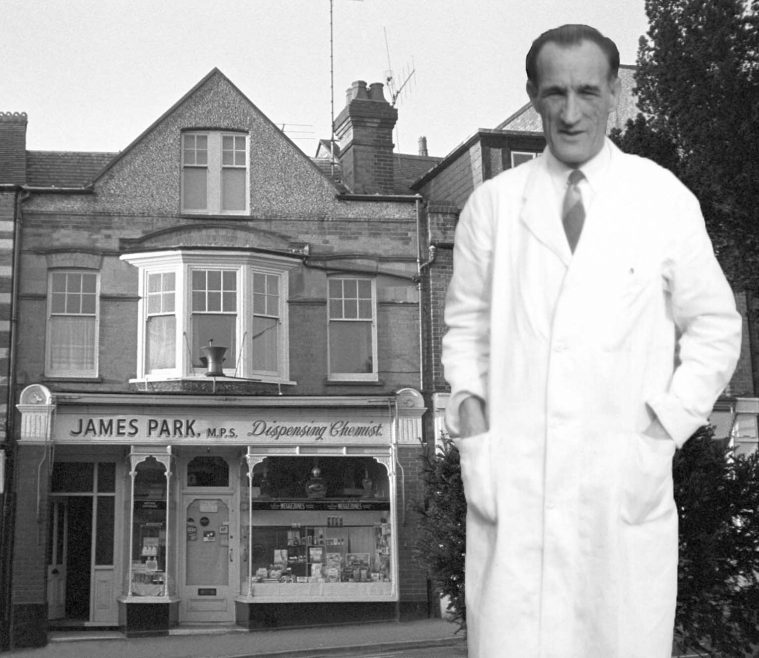 My father, James (Jimmy) Park, was born in Bo’ness, Scotland on 12th October 1911. The first of four children, he had two sisters (Margaret and Christine) and a brother (Johnny). He attended Bo’ness Academy and went on to study pharmacy in Edinburgh. After successfully completing the examinations he was registered as a chemist and druggist in July 1933 and was apprenticed to Alexander Fraser, pharmacist, of Hope Street, Bo’ness. He then spent a frustrating solid year applying for jobs, and was more or less forced to travel south to England where he eventually gained employment as the manager of a chemists shop in Margate, J Bailey and Co at 28 Ethelbert Terrace.

My mother, Marjorie (Madge) Park, was born Marjorie Edmonds on 14th October 1912 above the branch of David Greig, the grocers, in Portobello Road, West London, which her father, Henry, at the time managed. She was the fifth child of a family of seven children (she had five brothers (Henry, Harold, Cyril, Les and Ray) and a sister, Ivy (known as Babs) and attended the Godolphin and Latymer School in Hammersmith, West London, where she was a model pupil. She started a promising career as a secretary in the insurance industry in central London but, partly in response to the economic hardships of the 1930’s, the family embarked on a new venture in the shape of a boarding house (“Kookaburra”) in Margate at 11 Cliff Terrace. Madge’s mother (Annie) went down to Thanet to run this establishment, whilst father Henry stayed behind to run the grocers shop. Madge went to Margate with her sister Babs to help her mother in the new business, although she was also working outside the guest house, eventually for the Ministry of Labour, as a clerk in the Margate Labour Exchange.

It was on the beach in Margate on the 12th of July 1934 that Jimmy and Madge met. This was the beginning of a romance which led to their engagement in April 1936 and marriage on 21st April 1938 at Cliftonville Methodist Church. Initially Annie was not exactly ecstatic about the union. “I don’t know why you want to marry a Scotsman”, she chided, “when there are plenty of nice English boys around.” Thankfully, however, that sentiment was short-lived. It did not take her long to appreciate Jimmy’s worth.

Unfortunately Jimmy never did get along with Margate’s weather. He always used to say it was a very, very cold place owing to the fact that there was nothing between Bailey’s shop front and the north pole, or so he maintained!

In September 1937 Jimmy had moved to Oxford and started work as manager of R N (Robert Norman) Gardner’s Botley Road branch, at first living in digs with a Mrs Simmonds at 8 Helen Road. Madge wasn’t able to join him until the following year.

The happy early years of their marriage were overshadowed by the onset of the second world war, and Jimmy was recruited into the Royal Army Medical Corps as a sergeant and experienced all the horrors of conflict throughout the North African and Italian campaigns. In 1943, my brother Robert was born, so Madge, like many others of her generation, had to cope with an infant and toddler on her own, whilst playing as active a part as she could on the home front. Happily, Jimmy returned in the latter part of 1946, unwounded, although his health was never 100%. I was born in 1947, a little sister for Robert. In April 1949 we left Oxford for Tring where Jimmy became manager of Morrisons chemist shop at 74 High Street, with our living accommodation above.

Then in November 1953 Jimmy had the opportunity to become his own boss when a pharmacy complete with flat became available in Harpenden’s Station Road. (Interestingly the shop had previously been owned by two other Scotsmen in succession, James Ross Stevenson from 1917 until 1950, followed by Thomas Reid.) Madge worked alongside him in the shop, first on a part time basis, but ultimately virtually full time, combining this with her responsibilities for a young family and increasingly in a wide range of activities within Harpenden.

The ethos of the shop in Station Road was very much that with which Madge had been imbued in her youth. The majority of the customers were known by name. Jimmy and Madge set great store on providing a personal service which went well beyond a straightforward trading relationship. They were equal partners in this enterprise, although Madge regarded herself very much as Jimmy’s apprentice. They were also lucky to have two long time assistants, Wendy Groom and Mrs Saunders, who were very popular with the customers.

To the wider life of Harpenden, they were active contributors. Madge was very much involved in the local branch of the Townswomen’s Guild, and assisted much in their social service work. She ultimately became the President of the Harpenden branch, and was proud when in 2000 she was presented with a long service award after 47 years of involvement. Jimmy was invited (and accepted) to be the pharmacist representative in the local Rotary Club.

They were committed members of St Nicholas Church in Harpenden, acting for many years as Area Representatives. Harpenden was home to Judy Fryd, the founder of Mencap, who was a personal friend. Jimmy and Madge were very active supporters of this charity for a number of years.

In their leisure time, one of their favourite pursuits was Old Time Dancing, which they took up in middle age, and soon became great enthusiasts. And there was nothing Jimmy liked better after a hard day’s work in the shop than to come upstairs and listen to his records. He had a very eclectic taste in music, being perfectly happy to listen to Liszt one moment and the Eagles (Hotel California) or maybe Duke Ellington the next.

These were happy years, which saw my brother and me passing through education and then on into independence, and there seemed to be every prospect of an equally happy retirement for our parents. This was not to be however. Very sadly in 1979 Jimmy succumbed to illness, which was subsequently diagnosed as cancer, and he passed away early in 1980.

Theirs had been such a dedicated, close and loving marriage, and they had worked together so intimately, that it would have been understandable if Madge had withdrawn into herself and given way to despair. However, she had greater strength of character than that. Within a few weeks, she re-opened the James Park shop as a drug store, and continued trading on her own for an amazing total of a further 22 years.

She continued her involvement in the community as long as she was able, taking up a number of new activities, some of which surprised us. For instance, she undertook a long tour of Scandinavia. She joined the local Conservative Club and learned to play bridge. In her seventies she decided to study Italian, perhaps inspired by a holiday she had spent with Jimmy on Lake Como. She became a grandmother to Robert’s children Nicola and Jonathan and travelled substantial distances on her own to participate in family holidays in Wales, Scotland and elsewhere.

Ultimately, even her great energy and strength of purpose could not fully overcome the advance of age, and in 2004 she had at last to leave the business and home that had been hers for half a century. She spent the final four and a half years of her life in the Anchorstone Care Home in Farnham, where she was shown every kindness, and in return was regarded as a cheerful and patient resident, fond of a gossip with the staff. She kept them amused for hours recounting her years with Jimmy in Harpenden, and the old days back in Portobello Road with her siblings, Henry, Harold, Cyril, Les, Ray and Ivy. She was truly an amazing lady. I count myself very lucky to have had such a wonderful mother and father.

I should like to dedicate this article to my brother, Robert, who sadly is no longer with us, having passed away in May 2020. He would have been so proud to see our parents being remembered in this way.

Ed: all the photos are copyright from Marjorie Reader’s family albums 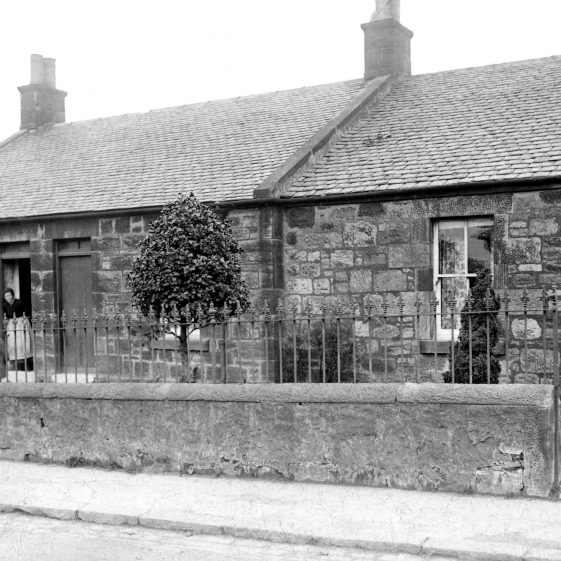 My father’s birthplace, Chance Cottage, Bo’ness, West Lothian, taken in the early 1920s.  His mother and sister Margaret are in the doorway on the left hand side of the cottage, and his Aunt, Janet (known as Jenny), is standing at the right hand side. 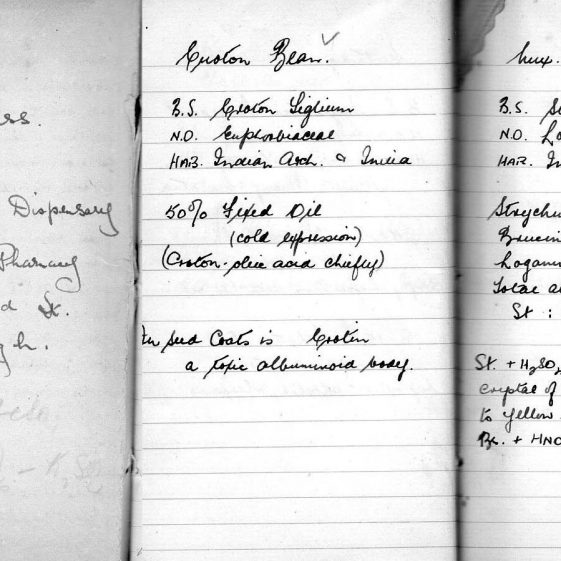 Pages from my father’s Edinburgh School of Pharmacy Notebook 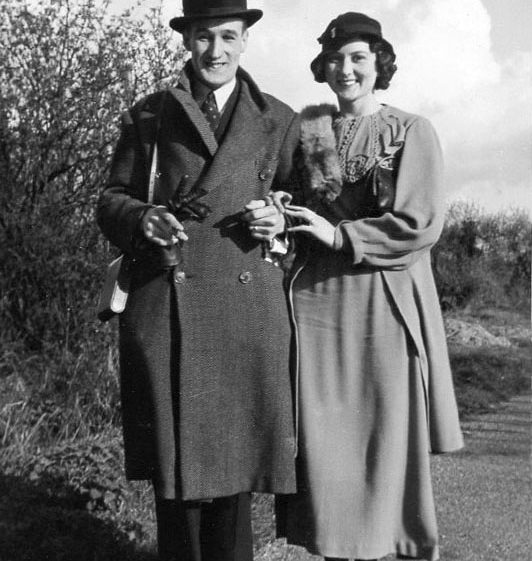 Father and Mother c. 1936.  I’m not sure of the location but I think this would have been taken round about the time my parents became engaged in 1936. 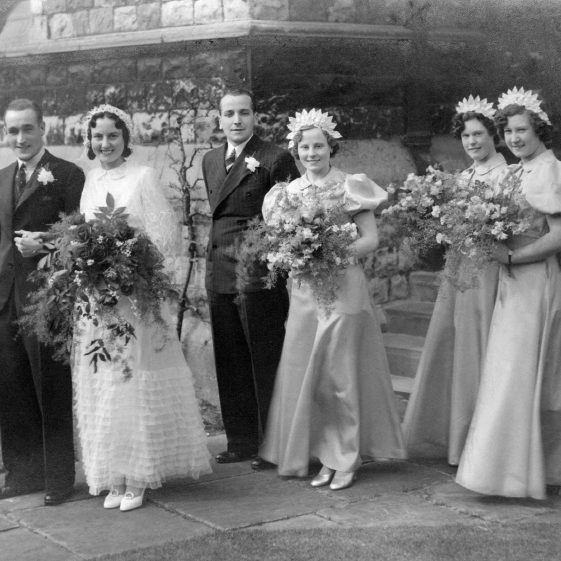 Wedding Day 21st April 1938. Behind the bride and groom are best man Peter Walker and the three bridesmaids (my Mother's sister Babs, her sister-in-law Dot, and best friend Topsy). 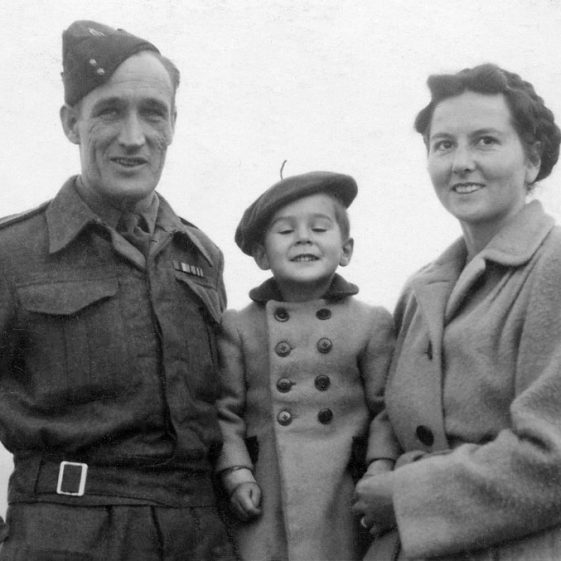 My father and mother with Robert at Margate c. 1945. 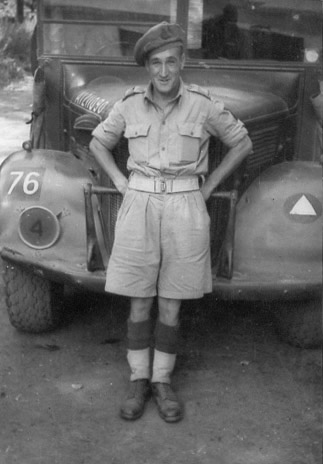 In Trieste c. 1946 as a member of the Royal Army Medical Corps 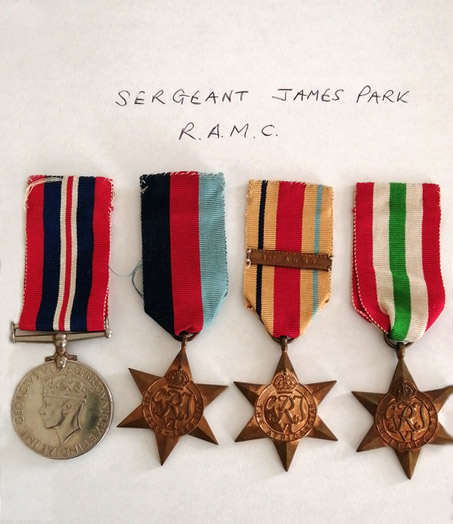 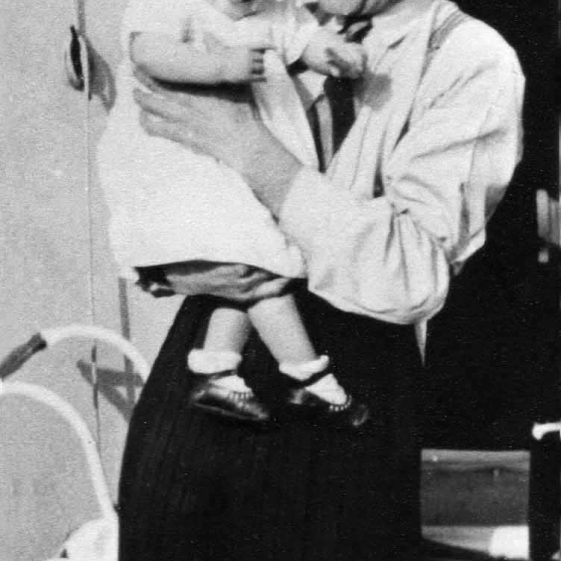 My father with me at our home in Botley, Oxford 1947 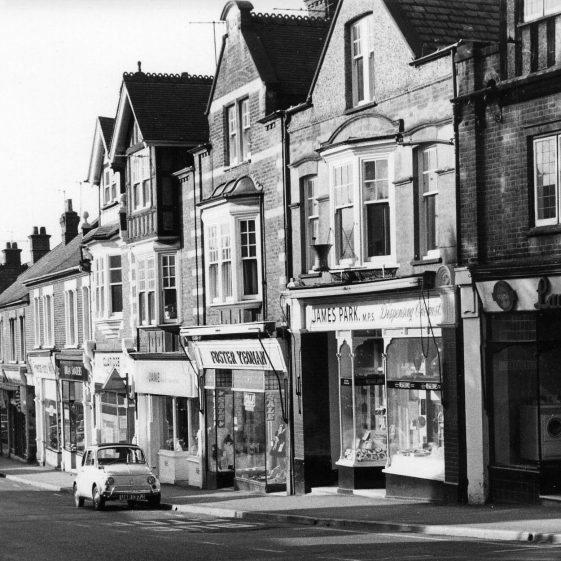 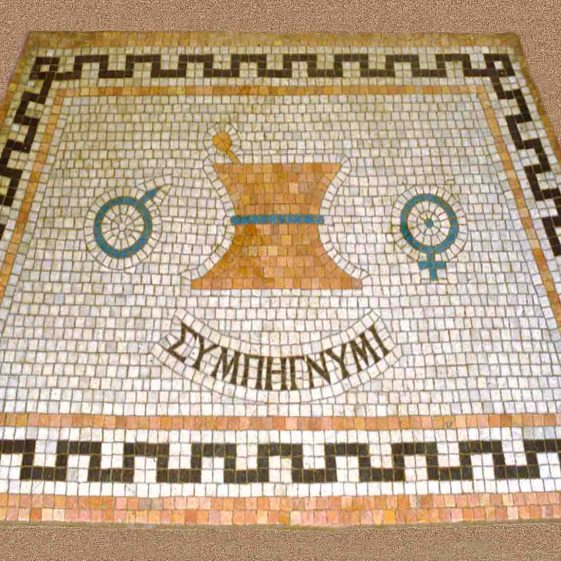 The shop doorstep at Station Road with its Greek inscription SUMPEGNUMI, which means literally "I put together" or "I compound", which of course is what pharmacists do. (With many thanks to Janet Evans for the translation.) 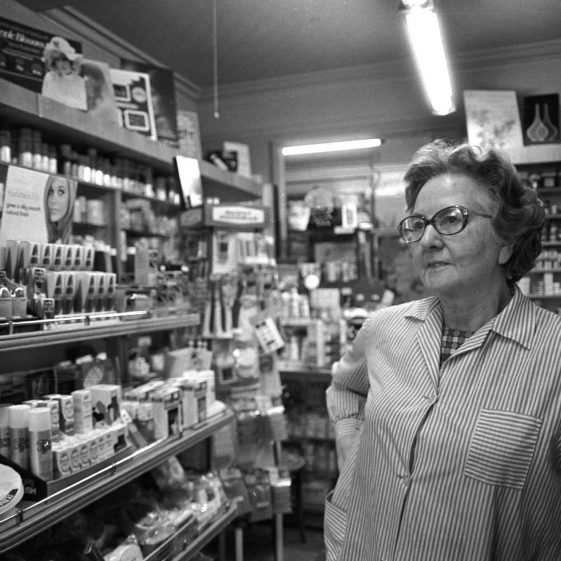 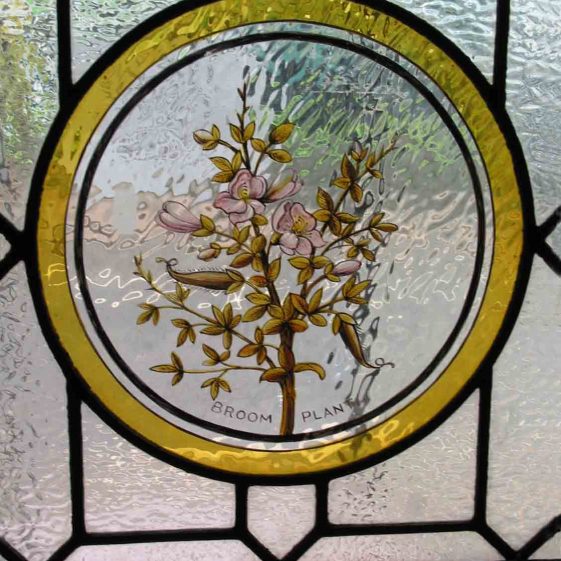 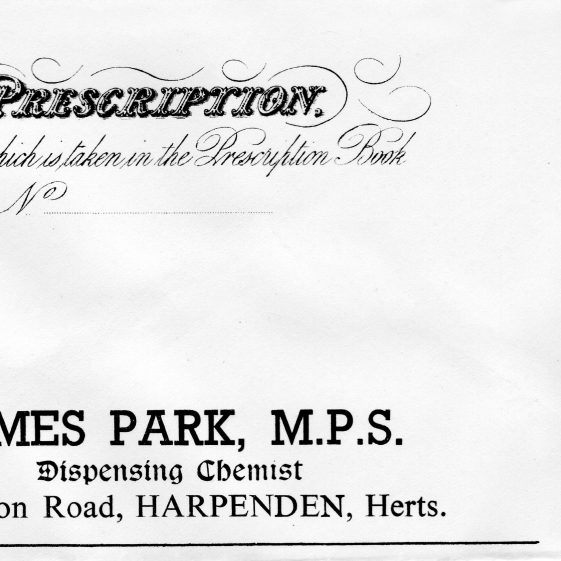 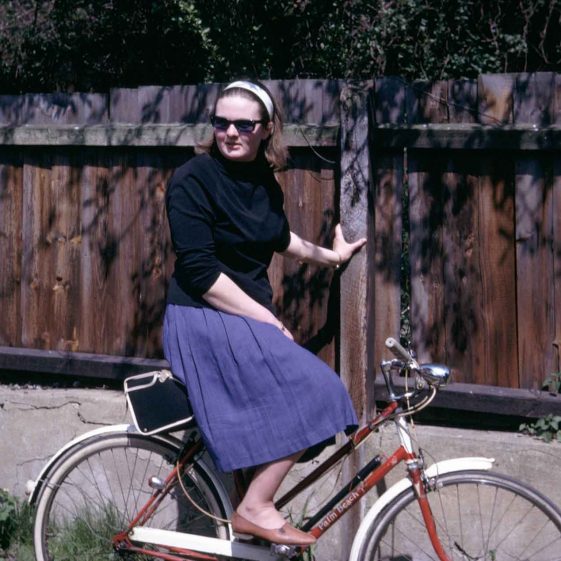 Wendy Groom, our long time shop assistant, returning on her bicycle from her lunch break, taken in 1966. 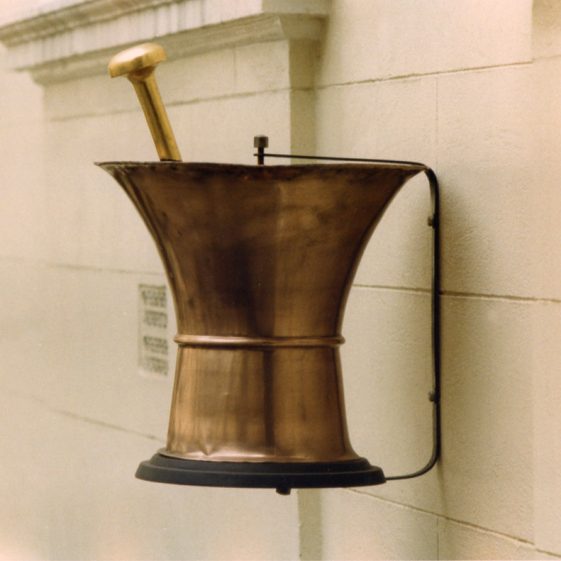 A feature of the shop was the mortar and pestle, an old trade sign for chemists.  Shortly after my father’s death, Dr Thomas Whittet, who lived in Harpenden, became Master of the Worshipful Society of Apothecaries.  To honour his Mastership and as a memorial to her husband, my mother gave him the sign and it was installed at the Apothecaries Hall in Black Friars Lane, London, which is where I took this photograph.  As far as I know it is still on display there. 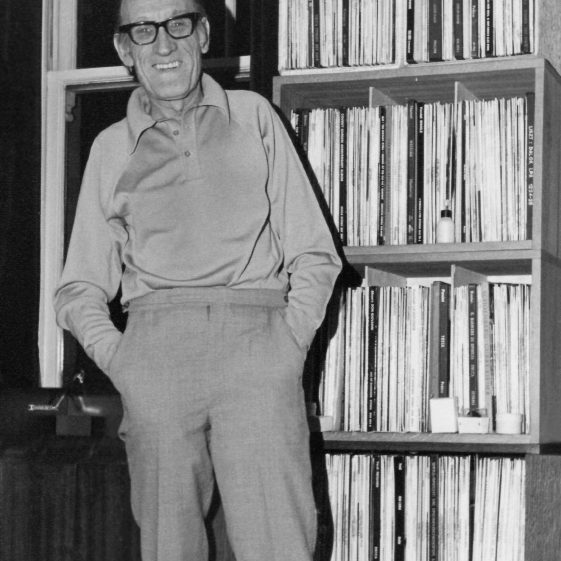 Father in front of part of his record collection.  He used to enjoy relaxing by listening to music after a hard day in the shop. 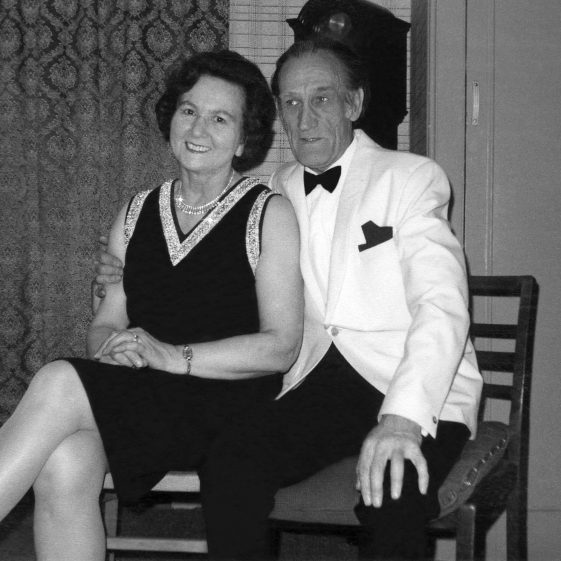 I took this photo one evening just before my parents were leaving for a dance, one of their favourite pastimes for relaxation. 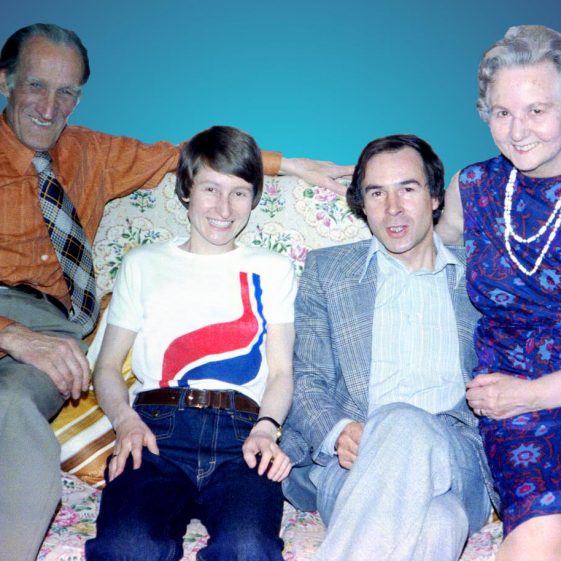 This photo, from c. 1977, is one of the few which exists of the four of us together.  It is one of my favourites. 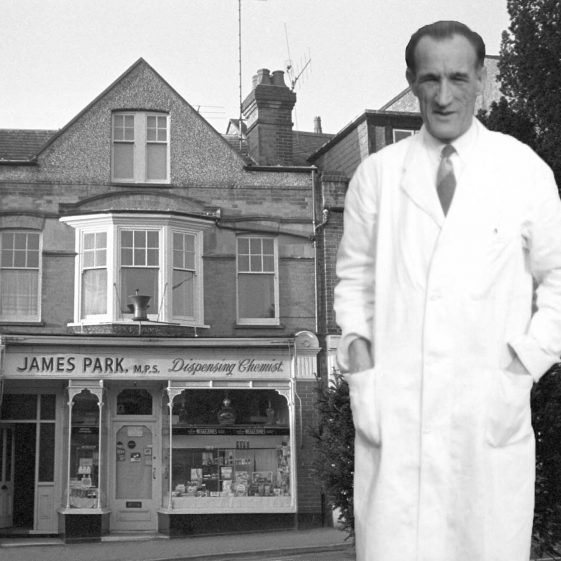 Montage of the shop at 28 Station Road in 1975, with my father superimposed