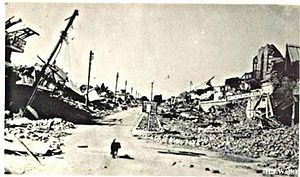 Bruce Street, Quetta, immediately after the earthquake lay desolate in ruin. Commercial businesses came to a halt along with the complete destruction of the Kabari Market and the Fruit Market. – Wikipedia

Based on a combination of two newspaper reports on the life of Dr Emily Gertrude Stuart. Cuttings found in the Harpenden Parish Magazine for 1948

A life of devotion to others was brought to a close by the death, on Friday, of Dr. Emily Gertrude Stuart, of “Westwood,” Oakfield Road, Harpenden.

Dr Stuart, aged 76, was a native of Manchester and was educated at Cheltenham Ladies’ College and St Hilda’s College, Oxford. She commenced her medical career at the Royal Free Hospital, London, qualifying in 1902, and a year later she fulfilled her girlhood’s desire and went to the Punjab as a member of the Church of England Zenana Missionary Society but was invalided home after two years.

Undaunted, Dr Stuart, returned to India after her illness and took charge of the military hospital at Quetta where she stayed for thirty years, not only carrying out her duties at the hospital, but also doing medical work in the neighbouring villages. 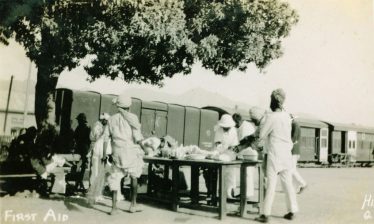 Initial medical set ups were established near the railway station to help provide first aid to the survivors. A tent city was built in the vicinity. – Credit – Wikipedia

A few weeks after her retirement in 1935, Quetta was visited by a disastrous earthquake which completely destroyed the hospital and city and claimed the lives of twenty thousand people. On hearing of this Dr. Stuart returned to Baluchistan and did six months’ relief work after which she came to reside in Harpenden with her sister Miss Helen Stuart who was Inspector of Schools in the United Provinces. They had been together for their last four years in India.

For her work in India, Dr Stuart was first awarded the silver and later the gold medal of the Kaiser-i-Hind (cited in the British Medical Journal, 8 June 1935).

During the 1939-45 war she was one of the two doctors in charge of the evacuee hospital* in Harpenden, and took lectures and examination for the Red Cross. Her chief work after her retirement was on the general and executive committee of the C.E.Z.M.S. in London.

*  No. 5 Bowers Parade was taken over by the Council and an Evacuee Clinic was set up as from 1 September 1939. It was staffed by helpers from the Red Cross and dealt with cuts and minor injuries. In July 1940 wire netting was fitted to the windows as blast protection. In February 1943 there was some debate as to whether this was still needed, but it was retained due to the worsening situation in Europe, which might lead to another influx of evacuees. However it finally closed on 11 December 1943.

The nurse responsible for the evacuated schools was recalled to London in March 1943, leaving the District Nurses in Harpenden with even more to do. They were not able to visit the schools as often as desired, but were hoping to arrange a central clinic, possibly at Manland School – from Harpenden’s Evacuation Scheme.